This is Marie, contributing an article about breakfast. My relationship with breakfast has been a little out of the ordinary because I am one of about four people in the world who dislike bacon (on its own merits, that is – not for religious, moral, or health reasons). When I was a teen, I learned how to make pancakes so I could tie up the griddle and get something to eat, then escape before my dad and uncle could fill the kitchen with the smell of frying meat. It was also fun to make smiley face pancakes and such for the littler kids.

My personal favorite breakfast is a bowl of fresh fruit with good yogurt, a bowl of cereal if it is warm, an egg or oatmeal in cold weather, some toast with a top-quality jam, and some hot black tea. A nice creamy Dutch cheese also goes well with the toast. Obviously, it’s easier to have this breakfast at home. Except on workdays, of course, when peanut butter on half a bagel is more typical!

However, every so often I am called to go out for breakfast. In this particular case, it was a friend’s visit. Our friend Chris, from Jacksonville, was back in town on the last leg of a road trip up to New Jersey and back on family business. When someone is visiting from out of town you let them have a good bit of leeway in picking out a place to meet, and he was the one to pick Rise-n-Dine, based primarily on the fact that it was the highest-rated breakfast place near his hotel. I made the trek to Decatur with the kids to meet up with Chris, knowing the wait time would be pretty daunting, so a bottle came along for the baby. It’s fairly popular place and if you either like people-watching or are meeting more for the opportunity for conversation than a quick meal, the wait isn’t bothersome. The wait was a little hard for a 12-year-old to take, but she managed with a little window shopping and the help of her phone. Twosomes will get in faster than larger groups. There don’t seem to be many larger tables.

Once actually inside, we were served quickly and had a cheerful server. He was a little bewildered by the request for a mug of hot water to heat the bottle, but complied promptly, and barely in time – the baby just barely began to fuss before his milk was done. The baby passed out in time for the food to arrive, nice timing on his part, and generous of him considering the fairly high noise level inside. The server had pretty decent hearing. I have been avoiding dairy due to the apparent allergy of a certain little person who shares my meals, and I have been unpleasantly surprised before to get rye toast (with butter on it) instead of dry toast; despite the noise, that server got it right. 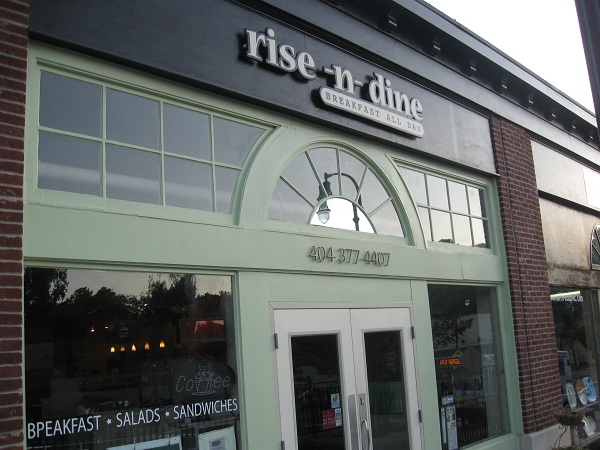 Ivy saw grilled cheese on the menu and asked if she could have that. Generally the answer is no, because we feel it is not right to pay 5 bucks for something that costs about 11 cents to make at home. However, in certain circumstances, such as when the restaurant uses multiple kinds of cheese on bread that isn’t unnaturally square, we make exceptions. She also ordered the orange juice. When her drink arrived and I saw how brilliantly orange and dense it was, I had to have some for myself. That, I think, was the best part of the meal, and it was surely better than the hot tea that would have been my alternate choice.

Unfortunately we didn’t order anything terribly photogenic. The table voted the herbed fried potatoes the best item after the orange juice. Next time I will make a point of getting the sweet potato pancakes.

Breakfast isn’t a hard meal to get right, as long as service is reasonably fast. However, Rise-n-Dine manages to take a step past the ordinary. I’d go again.

Other blog posts about rise-n-dine: