A few Fridays back, I had not decided where I was going for lunch, and then I got peckish early and set out to find some breakfast instead. I actually work with two former employees of West Egg Cafe on Howell Mill, and they speak fondly of their time there. So I looked over the menu and was very interested by some of the things that they assemble there.

West Egg Cafe was once a Jake’s Ice Cream store. I’m not certain for how long, but the franchise owner elected to get out of ice cream and strike out on her own with coffees, breakfasts and sandwiches. They do offer a few desserts in the form of pastries and cupcakes. I took home one of their celebrated Coca-Cola cupcakes to share with Marie and, frankly, was not impressed, but that’s okay. The omelet that I had in the restaurant was so darn good that it didn’t matter. 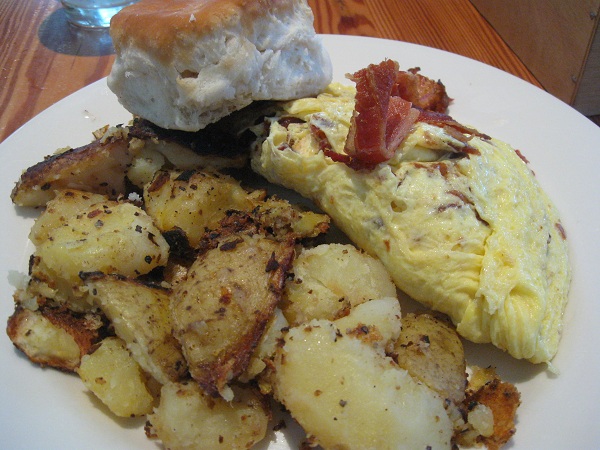 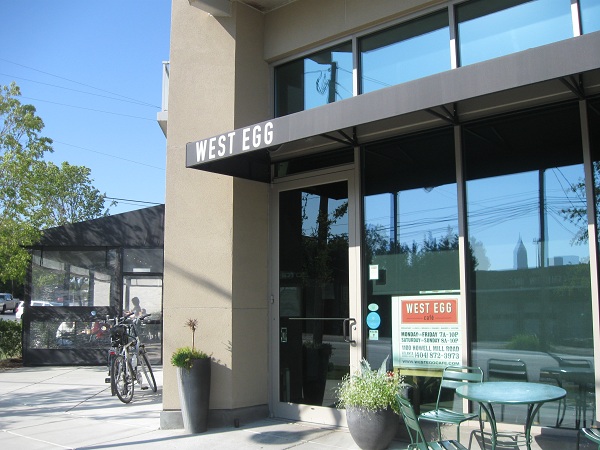 I’ve never had pimento cheese in an omelet before! I was torn between this and the Georgia Benedict, which is turkey sausage, eggs and gravy over a biscuit. That sounds wonderful, but the omelet was just fine. It came with a delicious biscuit and potatoes grilled in a skillet.

This place can get really busy, so breakfast guests should expect a wait. Fortunately, the deck behind the restaurant appears to be free, so there’s plenty of space to park. The service was downright excellent, with a small army of servers stopping by to check on everybody. I don’t go out for breakfast all that often, but it’s always nice to add to my options with a place as fun as this.

Other blog posts about West Egg: