I said the other day that neither celebrity chefs nor advance-opening hype really interest us as much as either longevity or reports of great food from people we trust. The “pre-release” hype is just the worst. I don’t know whether anything kills my desire to visit a restaurant as much as constant “advance looks” at its interior. Let me guess: it’s going to look more like a restaurant than a greenhouse, and might possibly serve cocktails in mason jars.

So it took several people’s subsequent reports to prompt me to suggest the General Muir to Marie after overkill had murdered my interest. It’s a shame, because it’s hardly the restaurant’s fault that the usual news blogs could not shut up about the place before it opened, and the food really did turn out to be terrific, prompting a lot of love and hyperbole from our fellow hobbyists. Jennifer Zyman, f’r instance, is quoted on a sandwich board out in front of the place.

It’s in the reasonably new Emory Point development on Clifton Road. It’s a mixed-use development full of small chains like Tin Lizzy’s, Marlow’s Tavern, and BurgerFi, and at least one artisan food shop, Strippaggio, that specializes in flavored balsamic vinegars. Parking is free for a couple of hours but then requires a credit card to leave if you’ve stayed too long. I wonder what would happen if I told them that credit card companies are engines of Satanic power, and they’re to take my sixteen bits and quit bellyaching. 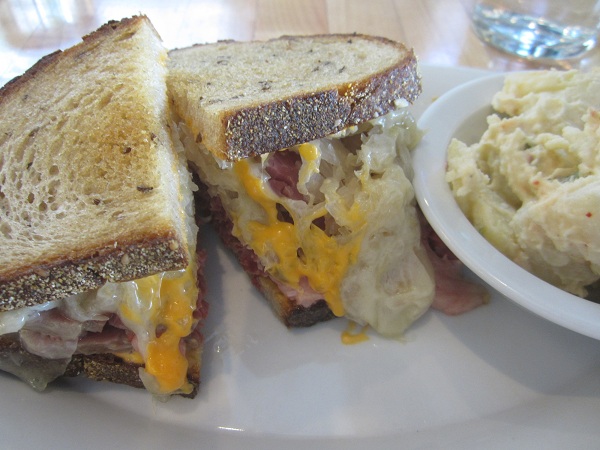 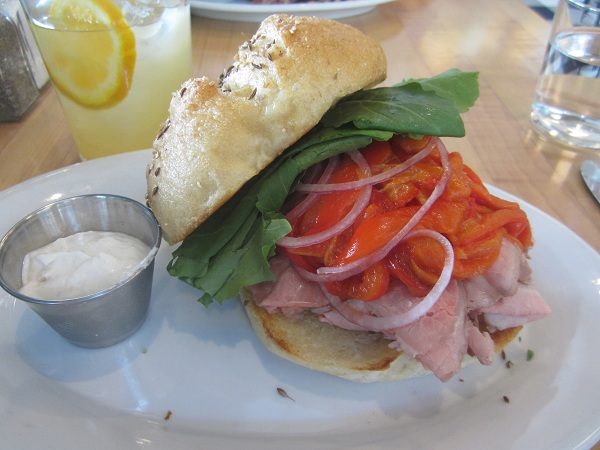 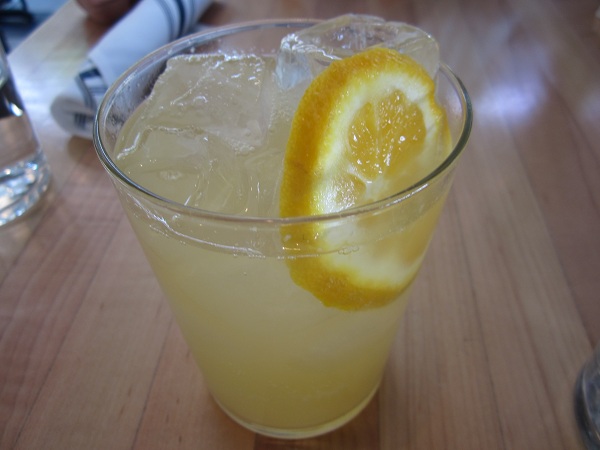 Anyway, the General Muir brings together some big names in Atlanta dining. It’s Ben and Jennifer Johnson of the West Egg Cafe working with executive chef Todd Ginsburg, best known for his work at Bocado and his very popular hamburger there. They decided to assemble a very good and classy, traditional Jewish-styled deli with gigantic pastrami sandwiches and just about the best corned beef reuben that anybody in the city’s ever made.

They also brought on a mixologist at the bar who, just in case you don’t want to go the whole Jewish-styled deli experience and drink a Dr. Brown’s Cel-Ray – nobody need ever drink a Cel-Ray – mixes up a new house-made soda every three or four days. On the Friday that we went, the soda of the day was an orange ginger, and it was completely terrific. Marie ordered one along with her roast beef on weck – fabulous, but just a hair less fabulous than the beef on weck from Barker’s – and we agreed that the tastes complement each other perfectly. I honestly cannot imagine why anybody would shell out for some expensive cocktail that won’t go with the sandwich as much as this does. I imagine that any of their original sodas will be worth sampling, but if the orange ginger is available when you visit, get it and the beef on weck. We’re not wrong. 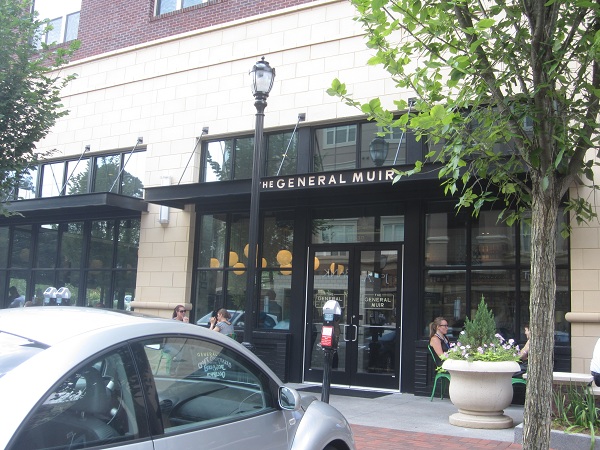 I’d read enough good things about the potato salad to skimp at breakfast and save the calories for here, and it didn’t disappoint. My reuben was tremendously good and the beef on weck great. Service was top notch and so was the soda. This was a very fun experience. We capped it off by visiting the deli and bakery counter, where Marie bought a slice of New York-style cheesecake to take home. This turned out to be really impressive, and especially so when she drizzled a little of the blackberry balsamic that she had purchased from Strippaggio.

Marie’s looking for more recipes to use her new bottle of balsamic. I question whether any will turn out to be as good as the General Muir’s cheesecake. She may resort to just drinking it straight in the end.

Other blog posts about the General Muir: