Tucked down on the south end of Buford Highway, its back turned against the avenue and facing instead the anchors of a strip mall, there’s a little Peruvian place called Machu Picchu that has quietly been drawing in crowds for the last twenty years. Our friends Vincent and Helen were in town and recommended that we give it a try. Everybody was in the mood for chicken, and so while this and the three or four other Peruvian restaurants in town have a reputation for seafood, we went with their chicken dishes.

Before the entrees came out, the server brought a basket of bread along with a terrific sauce. She explained that it was called aji sauce, and I resolved to look into that when I got home. Research didn’t help very much, because aji sauce has as many different recipes and flavors as barbecue sauce from Eastern NC to Kansas City. There are sixty-eleven varieties of aji sauce out there, in every color of the rainbow. At Presto Latin Cantina in Marietta, the aji sauce is very thin and almost colorless, served with empanadas and intended to be spooned into them after you’ve taken a bite off the corner. The aji sauce at Machu Picchu is a thick, spicy, light brown concoction that just goes wonderfully spooned over bread. Our server was kind enough to send us back with lots of the stuff. It separated a little in the fridge, but retained its glorious heat and flavor and I used it as a bread dip for toast with the next several meals that we enjoyed at home.

Unfortunately, the next item out didn’t satisfy the girlchild. She found the menu too troubling, and so she just asked for some empanadas. I had to force the child to eat some when we last visited Havana earlier in the year and, as almost always happens, she began kicking herself for missing out and wants to have them everywhere. But these are not quite like either Presto’s or Havana’s, and nowhere close to as wonderful. Helen described them as being “booby-trapped” with raisins and onions, two things that belong in many places, but not, in the girlchild’s eyes, in empanadas.

Fortunately, everything else came out very satisfying. 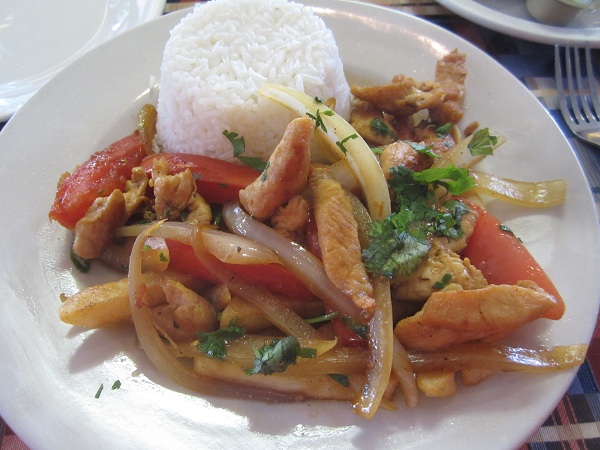 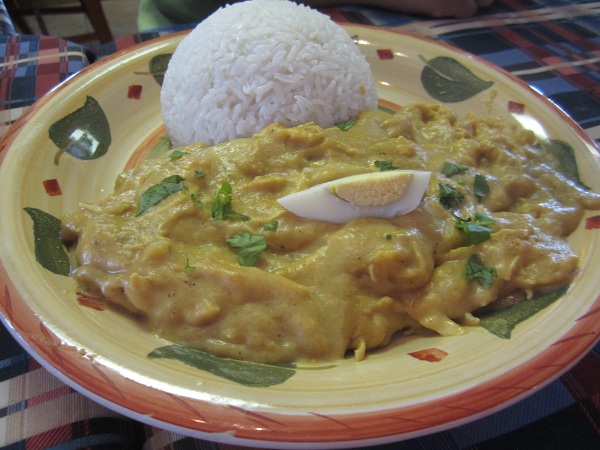 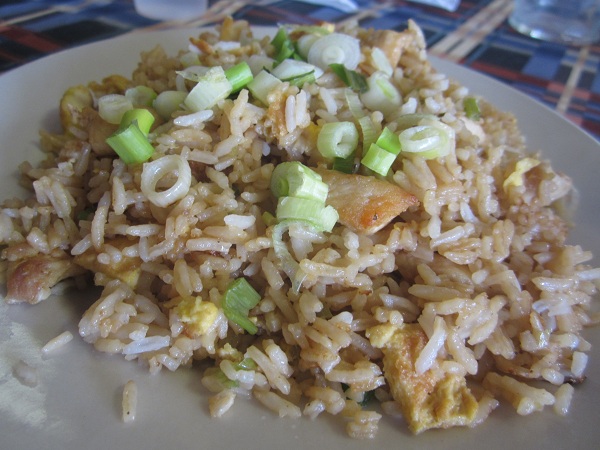 I ordered the Pollo Saltado, which is one of the restaurant’s signature dishes. This is simply stir-fried chicken with white rice, onions, tomatoes, and cilantro over French fries. It was quite tasty, but also seemed like an oddball take on Chinese-American cooking, as did Marie’s order of Arroz Chaufa con Pollo, which was, effectively, chicken fried rice. She ordered this for the simplicity of sharing with and feeding the toddler, who was, once again, up and busy and not wanting to sit still. There’s a big stuffed alpaca right by the door in the dining room to greet guests. He thought that alpaca was much more interesting than the food. 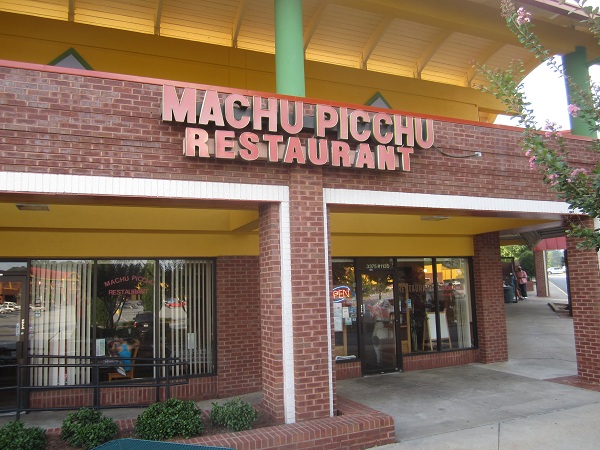 Helen ordered the dish that was the consensus favorite. Aji de Gallina is shredded chicken over rice, served in a really terrific cream sauce, cheese, garlic, and peppers. We all really enjoyed this. Should the road take us back to this restaurant, I will definitely order it.

To make up for the girlchild’s disappointing dinner of booby-trapped empanadas, we decamped to Sweet Hut for some pastries and boba tea. We’d have happily kicked back there for hours, and in fact, I was a little more than just aggravated when Marie called time on the evening. We’d each been taking the baby for walks and naps and Marie finally pointed out that it was half an hour past his bedtime. Well, you get to having fun and you stop noticing the time, don’t you?

Other blog posts about Machu Picchu: