In recent months, I’ve visited some of the barbecue restaurants in and around Atlanta that can trace their lineage back to Sam’s BBQ-1 and the old – well, recent, but old in restaurant terms – alliance between Sam Huff and Dave Poe. Those two once employed several cooks and staff who have gone out and started their own restaurants, with results that, in my book, range from pretty good to what I would have called disappointing but I’ve since downgraded to “downright awful,” thanks to the online sockpuppeting antics of its supporter(s) ticking me off.

However, we have clearly saved the best – for now – for last. Despite the name, which I find pretty silly considering this place isn’t even in Vinings, much less Buckhead, the Buckhead Barbecue Company has surpassed the quite good work found at both Sam’s and Dave’s restaurants. Their chef, Kevin Fullerton, used to work with those fellas. This restaurant is serving up an exceptional product at a terrific price from a little strip mall shop in Smyrna, just a few doors down from the excellent Roy’s Cheesesteaks.

They’ve taken the bold move of opening in the shadow of an unaccountably popular location of Jim ‘n Nick’s, a mediocre chain whose local store has already claimed one barbecue fatality in a store called Atlanta Ribs. I certainly hope that Buckhead Barbecue Company can draw enough attention to their little shop one mile outside the perimeter to thrive. Hopefully, the praise and love that Roy’s has found here will keep bringing the curious into the ‘burbs to try this place out. This place deserves some attention, friends. 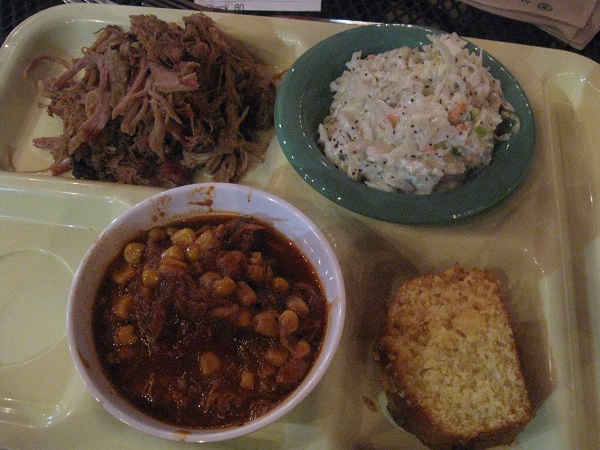 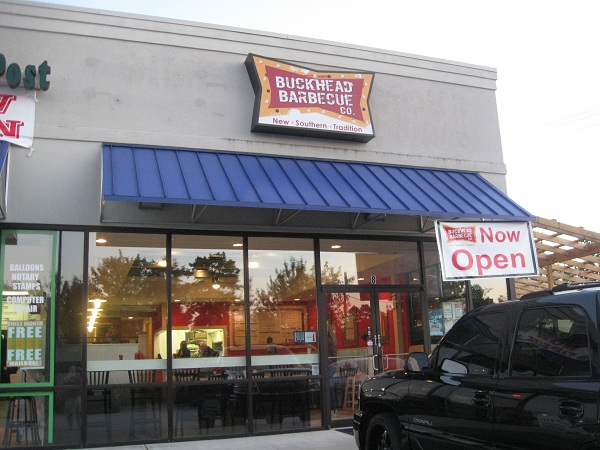 We had supper here a few Wednesdays ago, in the company of our good friends Dave and Amy, who live in Virginia and had come to town for Anime Weekend Atlanta and stayed to visit family. We commandeered a table on their patio for more than two hours, catching up and talking about barbecue. Actually, when Amy had requested that we meet somewhere for barbecue and told me that they were staying in Smyrna, my little “what can I blog about” senses started tingling and I knew just where I wanted to try.

All of the meats here are very good, with pulled pork smoked just perfectly and just moist enough to not need any sauce. That said, if you like drowning your meat and you like to try several different things, then Buckhead probably offers more sauces than any place that I know this side of Asheville’s Ed Boudreaux’s: a whopping nine varieties, and every one of them is lip-smacking tasty. If any one was the house sauce at a single-bottle joint, it would be a winner, which makes it a much better experience than Ed’s, where the phrase “jack of all trades, master of none” was never more true.

I was most impressed and intrigued by the different “Eastern NC Vinegar” and “Lexington NC Vinegar” varieties. I had heard that the distinctive sauce around Lexington was a vinegar-tomato blend, but, not really able to go up there and try it for myself, yet, I was left wondering what the difference is between that and the sauce common at so many restaurants around Atlanta and the I-20 corridor, which I would describe as red, and thick with a mild, vinegary kick. If what Buckhead Barbecue Company mixes is accurate, then Lexington sauce is much thinner – online recipes that I’ve since consulted suggest four parts water to one part each vinegar and ketchup, with sugar and lots of pepper – and has a different sort of kick, very much unlike what I have been finding and questioning. There is, it turns out, at least one other example of Lexington sauce in the area; Swallow at the Hollow’s vinegar sauce surprised me by splashing red all over the pink meat. Now I know why.

Apart from these, there is a very good mustard sauce, two examples of a traditional brown sweet sauce – a spicier “Kansas City” and a sweeter “Memphis” – and an Alabama white sauce, and every one of them is just wonderful. My daughter was so taken with the Kansas City sauce that, after she finished her meal, which included a fun little combo dish of Brunswick stew poured over very good mac-n-cheese, she started squeezing herself spoonfuls of sauce. Give her some saltines and she’ll look just like a starving undergraduate.

Dave had trouble deciding between two sandwiches. They offer one rather gloriously ridiculous Elvis tribute sandwich, with crunchy peanut butter, bananas and bacon, fried, and he was tempted, but he went with the Big Pig, which is a sliced pork loin beast topped with pulled pork, bacon, melted cheese and horseradish sauce. Dave was one of my groomsmen and I love the guy, so I seriously hope he had steamed vegetables for lunch the next day. On the other hand, with the bread puddings he and Amy took along with them, I’m not so sure eating healthy was on the agenda. Well, they were on vacation.