I’ve been telling myself for at least five years that I needed to get over to Lower Roswell Road and check this place out. Friends, if you live in Cobb County, don’t make the mistake that I did and put this off any longer. Sam Huff has been cooking up some amazing pulled pork that you seriously need to try. He apparently lives out in West Cobb, in that Lost Mountain community that I had driven through just two days previously, and was a regular on the competition circuit for years, winning all kinds of awards for his pulled pork, ribs and brisket. Six or seven years ago, he partnered up with Dave Poe and they opened what would become two restaurants in Marietta. They’ve since gone their separate ways, and Poe got the other place on Whitlock. I drove past it two days previously as well. That was an odd weekend.

Two Sundays ago, Marie and I were going to do something to celebrate her birthday. She just wanted a day together, away from kids, with a few general ideas about what she’d like to do. As I assembled a battle plan and a road trip that would take us via back roads up through Roswell and Alpharetta, I looked for lunch in the area and realized we could get some barbecue at Sam’s place. Even better, Sam’s wasn’t one of those irritating closed-on-Sunday joints that have been complicating my life. We drove right past a place that I wanted to try, Amos’s, which is near Ball Ground, on our trip. Closed. 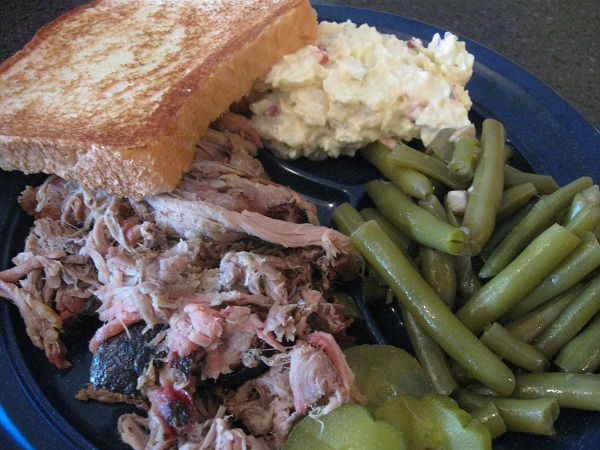 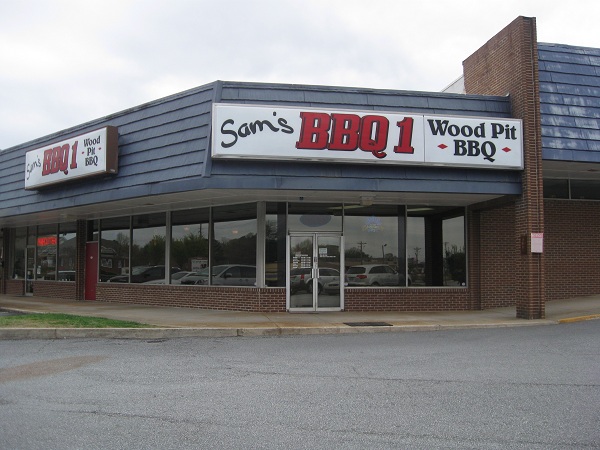 Sam’s occupies two storefronts in a beat-up old strip mall near Johnson Ferry Road. One of these is the takeout store and the other is the restaurant. Sam’s has been answering the same questions about their food for so long that it’s led to some playfully exasperated T-shirts and signs explaining how many people can be fed with a pound of pork, that their meat is pulled and never chopped, that take-out orders are two doors down, and other rules. This has led to playful teasing from the regulars about supposedly misunderstanding the policies. During our visit, I saw two groups come in to enjoy lunch who ribbed the kid at the register that they wanted carry out. Poor kid.

The pulled pork here really isn’t very smoky, but it’s very moist and flavor-packed. It’s served dry, and guests can help themselves to three sauces at a pump station next to the drinks. The most popular, unsurprisingly, is a sweet Kansas City-styled tomato-based sauce, but, while good, I found this the least of the three. The vinegar and the mustard sauces were both outstanding. I don’t know which I prefer; both really complemented the meat really well and I haven’t enjoyed the combination of great pork and great sauce so much in weeks.

The sides were very good, too. I ordered the lunch special with a sandwich, baked beans and a glass of sweet tea, and Marie enjoyed a plate of pulled pork with green beans and potato salad.

I definitely plan to go back soon for another meal. This is absolutely among the better barbecue joints in the Atlanta area.

Other blog posts about Sam’s: