Ages back, when I first went down to Columbus with Matt to meet his pals and see the town, we stopped by a diner called Gabby’s. It was a pretty filthy place. It was sort of a Waffle House crossed with one of those dumb joints that tries conning you into thinking it’s a “1950s” diner by way of a bad airbrushed picture of James Dean with his arm around Marilyn Monroe, but they served up a quite remarkable plate of hash browns via the kitchen sink, and they seemed to be the only place in the city that served Royal Crown Cola from a fountain. Quite apart from the inescapable truth that RC is just plain better than Coke, you’d think that more places in town would want to shine the local spotlight on a nationally-known beverage headquartered in the city. Of course, you’d also think that everybody in Chattanooga would want to serve Double Cola, and they don’t, either. At least several places in the Carolinas seem to be proud of Cheerwine.

About a year later, I was back in town and we went to Gabby’s and I ordered an RC and the waitress, no joke, went straight to a Coca-Cola dispenser and filled my glass. “This tastes an awful lot like a Coke,” I told her.

“Isn’t that what you wanted?” she said.

“Oh, we don’t have that,” she said, evidently unaware that her business once sold them. We never returned to Gabby’s, and I see that the diner has since closed. As well they should, given such an unfortunate business decision.

A couple of years passed before Ric e-mailed me shortly before one of our planned trips from Columbus to Mobile. He had found another place in town that served fountain RC. 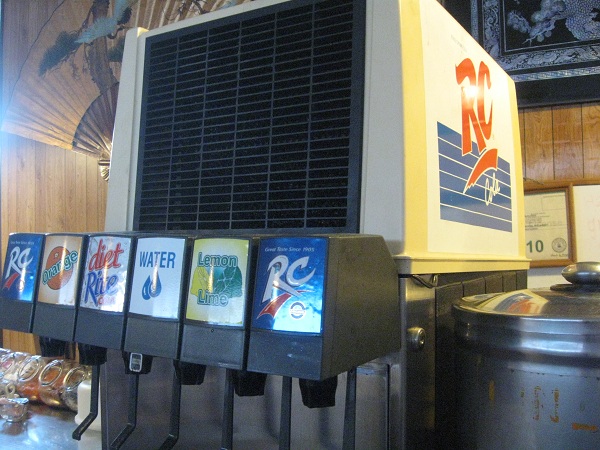 So after our trip to Mobile that year, probably 2007, we drove over to this small, family-owned Korean place to check out what they had to drink. Unfortunately, the photo above shows that there has been a sad change since my last visit. You see the label for “lemon-lime,” right? In 2007, that was Upper 10. If you’re interested in odd, regional sodas, that will get your attention. As recently as 2007, RC was still providing Upper 10 for fountains.

But times have certainly changed. That fountain itself is a glorious relic, but I’m not entirely convinced that’s actually Royal Crown Cola in it anymore. I’ve found two barbecue places in Asheville that have fountain RC and its vibrant, wonderful taste, mixed correctly, is pretty unmistakable. I had a cup of what the label claimed was RC and drank some flat, generic-tasting bilge. So if anybody from the Royal Crown Company in Columbus is reading this, you either need to get somebody over to Ok Sun and recalibrate the machine, or tell ’em to quit claiming that what they are serving is your own wonderful beverage.

It’s probably worth noting at some point in this entry that there’s another reason to visit Ok Sun. The food’s darn good, too. 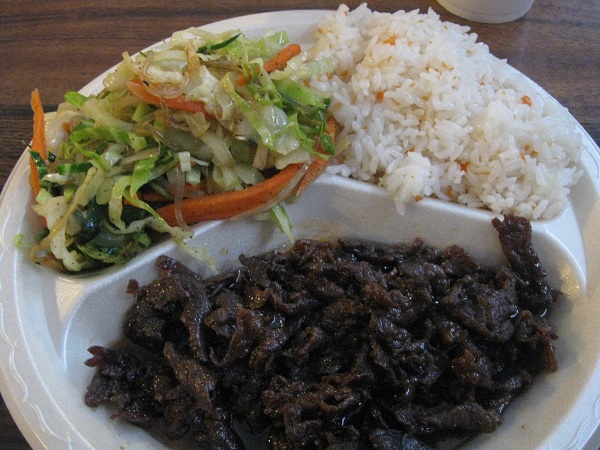 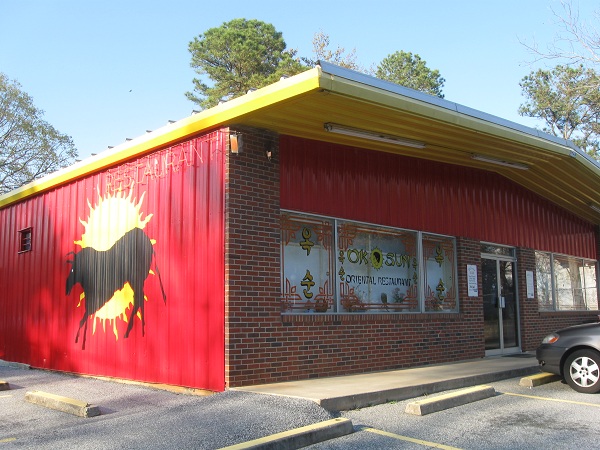 We returned to Columbus and stretched our legs for just a moment at Ric and Maggi’s place before driving over to the restaurant. It’s five exits away on I-185, which, in Columbus terms, is the other side of town. Maggi called their friend Katie, who’s just about as effervescent and silly as she is, and great company, and invited her to join us.

Ok Sun has a lot of community goodwill. Katie and Maggi have eaten here since they were children, and another of my friends in town, Cheryl, was once so outraged about our visiting the place in 2007 without inviting her that she pretended to be aggravated with me for a month. This is a place that locals absolutely love, and with good reason.

The house specialty is the bulgogi, and most of us had that. I had actually been planning to try the spicy pork bokum, but decided to heed my doctor’s advice the day before and not rush into anything too spicy just yet. So I had the bulgogi as well, and really liked it.

Bulgogi is thin strips of very flavorful sirloin, cooked over an open flame and marinated in a bath of seasonings. It’s served with steamed rice that has just a whisper of salt in the small, diced carrots, and a healthy portion of chop che. As with the fries that he ordered down in Mobile, Ric’s son didn’t make a lot of headway with the chop che, but the rest of us just inhaled it. This was indeed excellent stuff.

I greatly enjoyed spending the day with Ric and Maggi and meeting Katie, and maybe, if Ok Sun can get that drink machine of theirs fixed, I’ll come back some time for that pork bokum. But not the next time. When we next come down to Columbus, probably in the fall, I’ve already decided on two or three more places there and in the neighboring Phenix City which are crying out to be tried. Plus Marie’s definitely going to want another meal at Country’s; she was a little sore at me last year for keeping that barbecue from her as long as I did.