I’ve said before that I’m sure other parts of the continent – Wyoming, Montana, the Yukon – have mind-deadening, desolate highways bereft of civilization, restaurants and funnybook merchants, but in the southeast, we have two humdingers of our own. I-16 between Macon and Savannah is one, and it’s pretty amazingly stultifying, but that’s like rush hour in Philadelphia compared to I-65 between Montgomery and Mobile. This highway, 169 miles of nothing, will try the patience of the most seasoned road tripper.

But I was not completely prepared to give up hope. I-16, of course, has Jomax Bar-B-Q in the town of Metter along its agonizing length. I wondered whether I-65 might also have something worth similar that would be worth a stop. I put the question to the good folk at Roadfood.com and got back several encouraging suggestions, leading me to think that this road wasn’t quite as burdensome as I had made out. I picked Kendall’s BBQ from the recommendations, and asked Ric whether he would mind stopping on the way back to Columbus for a snack.

Would you believe he’d known about Kendall’s for years? 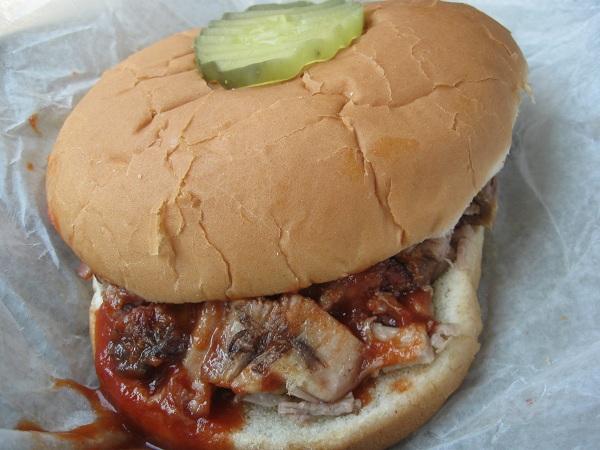 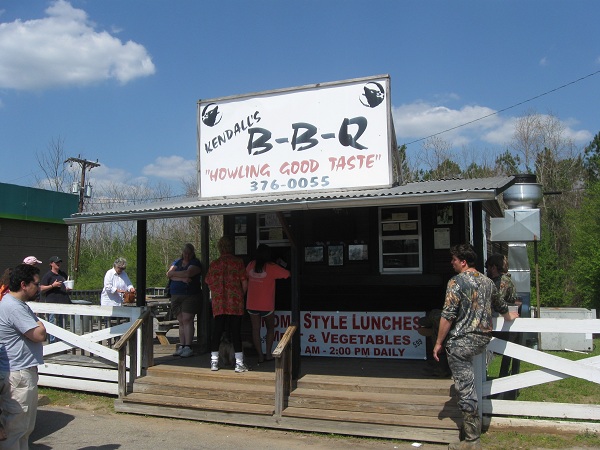 Used to be, Ric would drive from Columbus to Mobile and back twice a month to spend time with his son. That’s an awful burden for anybody to handle on his own. I suggested many years back that I would come along for a trip a year, to spend a little time catching up and having fun, enjoying some gulf coast air and food, and to give him somebody, anybody, else in the car with whom to talk. Over time, the burden has become much easier; Ric has since married the wonderful Maggi, so his trips are not always solitary, and, happily, he usually has only to drive as far as the midpoint town of Greenville now that his son’s mother is occasionally willing to meet him part of the way. So his eight-hour round trip to get his son has become just a four-hour one. The poor kid’s read an awful lot of books on I-65, though.

But you’ve got to do something on I-65 to kill the boredom. This road is amazing; nobody lives in this part of the south. We found out why this past Saturday. Summer starts on March 19. We stopped in the town of Georgiana to try Kendall’s and it was 87 degrees without a hint of breeze. Maggi, recovering from a stumble a couple of days earlier, got so red on her arms as we stretched our legs and waited for our barbecue that she believed she would burn. In March.

Well, I say that nobody lives here, but that’s not true. Those that do seem to spend their Saturday mornings fishing and hunting, and then make their way to Kendall’s in droves in the early afternoon. It’s a takeout window with a beat-up wood patio and picnic tables, and it gets very, very busy. It shares a parking lot with a gas station and getting your car in here can sometimes be very tricky.

I just had a sandwich, and, kick me, again failed to ask for it without sauce. This was the second time in two days that I did this, and the second time that I got way too much freaking tomato-based sauce. It was pretty good sauce, very agreeably sweet and very complementary of this excellent smoked meat, but there was more of it than the meat needed. I’ll make a deal with everybody who runs a barbecue joint in the south: I’ll remember to order my sandwiches dry and y’all quit drowning your food, else I’ll send Louie the Lifeguard in to sing at you.

We were there for a short time, enjoying the warmth and stretching before our sandwiches came up and we got back on the road. It’s not nearly so awful a trip when you have good friends and good food. We got on the other side of Montgomery and Ric decided we should swing by Auburn to see what has become of the oaks at Toomers Corner in the wake of that jackass from the northern part of the state poisoning them. We’re all Bulldog fans, but that crap is inexcusable, and we were all repulsed by it. The trees weren’t visibly sick-looking to me, but I don’t know what I would be looking for. I do know that seeing all that soil dug up and all that exposed root system didn’t look right. I hear the prognosis is still pretty bleak. I hope that if those trees do go, somebody poisons that jerk’s root system.