I miss my dad a whole lot, but a recent trip to his all-time favorite barbecue joint made me miss him even more. I missed how he would have reacted to a menu change that would have had him fuming, in his good-natured way.

We hadn’t seen our friends Amy and Dave, who live near Richmond VA, for any time at all in ages. The last time we got together for supper, it was at a place in Smyrna called Buckhead Barbecue Company, which Kevin Fullerton, previously part of the Sam & Dave’s barbecue dynasty of Cobb County, had set up amid some rumble and hype. The business didn’t last all that long, however. Fullerton sold it in, I believe, early 2012, and it closed without incident or many tears a few months ago. Amy was disappointed; the meal that we had there was really good.

I suggested Old South as an alternate. It had been a few years since I last visited, and I was a little apprehensive about it, because they have a family history of being a little inconsistent. There have been visits in the past that were really satisfying, and others that let me down. But I crossed my fingers and hoped for the best, and, wow, did they ever come through. 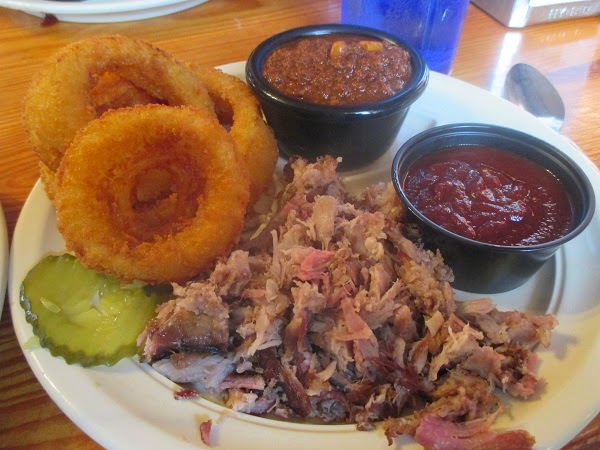 Old South is the longest-lasting restaurant in Smyrna. It’s on Burbank Circle at Windy Hill, near the intersection with South Cobb Drive. Jim and Helen Llewallyn opened the restaurant in 1968. Their children run it today, and the business inspires some of the fiercest loyalty of any barbecue place that I have ever visited. Their clientele skews a little older than many, but having grown up in the area and eaten here off and on all my life – their longtime employee and family friend Lynn Ponzio brought food when Dad died – I’ve known more people than I can count who either won’t eat barbecue anywhere else, or compare everybody else’s, unfavorably, to Old South. These aren’t the loudmouths with blogs, of course, so it doesn’t have the reputation that, say, Fox Brothers or Heirloom Market have with younger enthusiasts in this area.

They use an inside fireplace smoker not unlike Old Brick Pit or the original Fresh Air Bar-B-Q, although the shape is somewhat different and the meat is directly above the wood. Sometimes the chopped pork has come out drier than I like it, and sometimes almost mushy, but it was perfect on this visit. Everybody ordered chopped pork or ribs. The chopped pork is smoked over hickory for at least seven hours and it was excellent, as good as it gets. It came out so incredibly flavorful and good that our friends told the server that they were prepared to move back to Georgia. They can’t get barbecue anywhere near this good in Virginia.

My daughter is the only person I’ve ever heard of who does not like the Brunswick stew here. It’s quite unlike many other places’ recipe. There is lots of meat with only a little bit of corn, and it doesn’t have a real tomato flavor to it at all; it is more peppery than most stews and is deep brown in color. 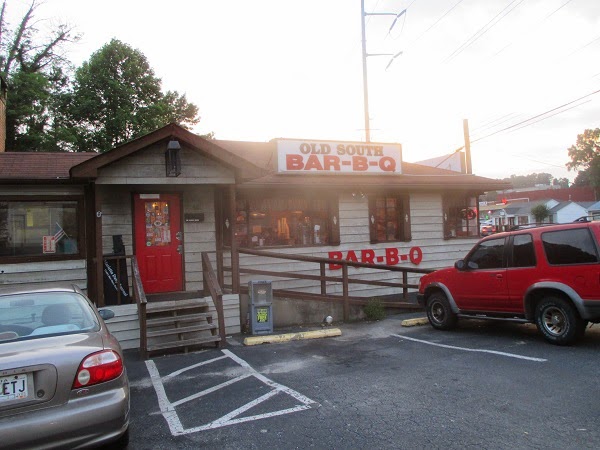 When he ate here, my dad would always order the stew as one side, and also some onion rings with Heinz 57 sauce. I almost duplicated his usual order – he liked his pork sliced, which I don’t – and was surprised that they no longer have Heinz 57. “I can bring you some ketchup,” our server offered. Wait, what?

It turns out that Old South used to sell steaks. I honestly had no idea; I’ve only paid the barest attention to non-barbecue menu items at a barbecue restaurant, usually only to report “they also serve hamburgers” and give these reports a little additional color and an extra sentence. It never occurred to me that the only reason that any restaurant would offer Heinz 57 would be as a steak sauce, because my dad liked Old South’s onion rings better than anybody else’s on the planet, and he liked them with Heinz 57. He did that thing where he “forgot” that he had ever mentioned this to anybody before, and whenever we ate here or brought food home, he’d note, to me or to whomever, “I see that you got some onion rings. Here, you need to try this. Have you ever had Heinz 57 with onion rings?”

“Yes, Dad, every time we get food from Old South –” This was, you’ll understand, a particularly tiresome routine when I was a sixteen year-old.

“All onion rings are very good with Heinz 57. Not a lot of people know that. But Old South’s onion rings are especially good. I don’t know why. They just are. Here, let me pour you some.”

I can understand any restaurant wanting to cut costs, and there is of course no need to keep ordering a steak sauce from the supplier if you don’t have steaks. But they really should pick up a great big bottle of this and keep it in the fridge for those very rare occasions when somebody who spent time being pestered by my dad asks for it. I thought I needed to go by the cemetery to tell him how everything’s gone to hell down here. You can’t get onion rings with Heinz 57 at Old South anymore.

I did not, of course, take the lovely server up on her kind offer of ketchup. Thinking about his grave, I didn’t want my old man turning in it.