The Georgia Rib Company is, without question, the strangest looking barbecue restaurant that I have ever visited. There are many businesses where guests might question the layout or the decor, but this was the first time that I have ever entered a business and thought that somebody stole the sign from the actual restaurant and moved it somewhere else as a practical joke.

I had never heard of this place until I started cleaning up Urbanspoon’s barbecue listings several weeks ago. I was working through the G-named restaurants in the Atlanta section and found this place in Marietta. Reasonably certain that I would have heard somebody mention it if it was still in business, I phoned them fully expecting the number to have been disconnected. But no, they’ve just been quietly doing business in a huge building that once housed a skating rink, keeping to themselves for many months in the shadow of the celebrated and popular Sam’s BBQ-1. Seriously, you can see this building from Sam’s, and would have no idea that it was a barbecue joint unless you went inside to check it out for yourself.

So basically, you’ve got a huge barn of a skating rink building, but the interior has been retrofitted to look like the most dated, early-eighties wall-carpeted event space that you’ve ever seen. The corridor has meaningless little angles in it, and there are at least three dining rooms. We entered and found nobody in the airlock or the hostess station. Ahead on the left, there was a private room that seats close to a hundred, lights out. Further along this new wave corridor, on the right, Marie and I could hear light R&B, and we found a bar that was a little smaller than the event room. It was only slightly more alive than the closed private room; there was one couple in a booth waiting for their meal to arrive. Further down the corridor is a gigantic room, also darkened, that, in the evening, hosts live music in a barn for about four hundred.

We figured that the middle room was where we were meant to be, so we returned. The room looks like a sports bar, with plenty of college football banners and several flat-screen TVs tuned to either games or some Angelina Jolie movie, but all of the TVs were muted so that we could listen to the smooth sounds of people who, like Kenny G, could play rhythm but had no idea what the blues were. There were no staff around in this enormous complex, just that one older couple, patiently and happily enjoying each other’s company, while important games played silently with a soundtrack of a meaningless, quiet pulse of love songs for the soulless.

This was, in point of fact, the weirdest and most out-of-place that I have ever felt since a co-worker in Athens once invited me to visit her at this bar where she worked, which I’d never heard of, in the old Ramada Inn on Broad Street that’s now a Holiday Inn Express, and the bar turned out to be a pick-up joint for the Centrum Silver crowd who wanted to dance to a bad cover band playing “Smooth Operator.”

In time, some hungover teenage girl emerged to show us to a booth. She had no idea that the restaurant’s web site offered a $4.95 lunch special of a sandwich and a side. This food would have to be something else to make up for this utterly bizarre atmosphere. Fortunately, it was pretty good, and struck a pleasant chord in my memory. 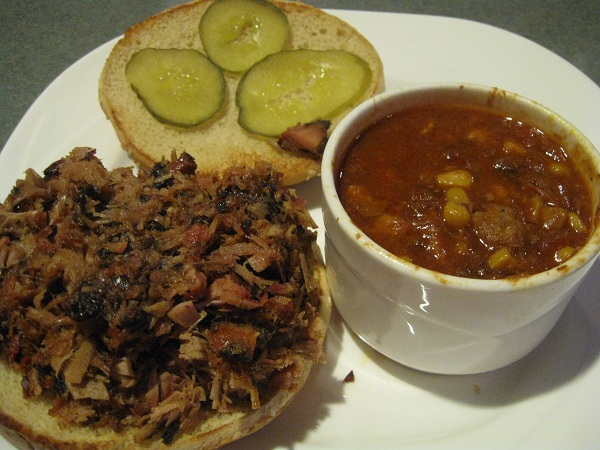 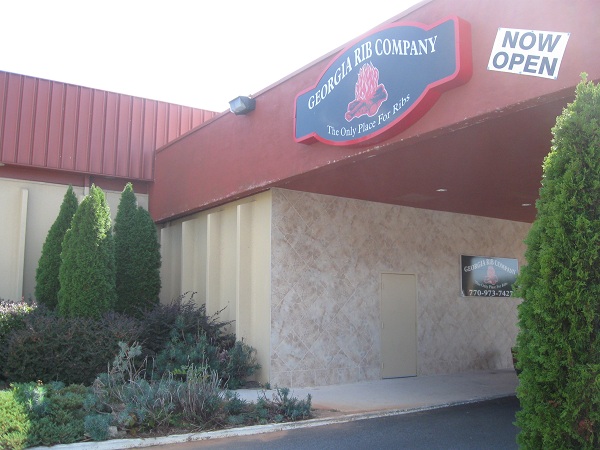 Marie and I each had chopped pork sandwiches. Getting the problem out of the way, the sides were pretty disappointing. Marie had the collard greens and did not finish them, and I had the Brunswick stew, and while it was pleasant, it didn’t bowl me over.

But the chopped pork here really is something else. It is really smoky, dark, pink and dry. It’s so distinctive and so dry that, more than most in Atlanta, it genuinely needs some sauce to mix right. It’s probably not accurate to say that it is “crying” for sauce, but it is definitely coughing and clearing its throat for some. This was a real treat, finding something so wholly, utterly unlike the usual suburban standard of moist-to-greasy pulled pork that I have seen lately. There is only one sauce here, a sweet, brown, Memphis style. It goes excellently with the pork.

Much as I enjoyed the meat, I quickly found myself wishing that I had gone against convention and tried the ribs. Even though ribs are in this restaurant’s name, it just didn’t occur to me to order them, as I prefer chopped pork. However, this place must certainly know what it is doing, as the young server informed us that the owner, many years before, had once run Jilly’s, The Place For Ribs. I didn’t even half-remember that place when I saw Georgia Rib Company’s boastful slogan, “The Only Place for Ribs” and thought that a bit bold of them.

But when the girl mentioned Jilly’s, a lot came flooding back. This was a small chain in Georgia many years ago. When I was a kid, my family would occasionally visit the one on Cobb Parkway in Smyrna. Not yet interested in barbecue, I’d always just get a burger – of course – but I recall that they had amazing, messy, greasy onion rings. There were also stores, locally, in Roswell and near the East Lake shopping center in Marietta, and stores in Macon and Columbus. I enjoyed the nice rush of pleasant nostalgia for long-gone restaurants, as I often do, and affirmed that this gentleman has probably been smoking and grilling almost as long as I’ve been alive.

I don’t know the circumstances that led him to resume serving barbecue in this really weird space, of all places, but I’m glad that he’s back. Now that I’m older and know what the heck good ribs are supposed to taste like, I might need to return and try what stubbornness had kept me from trying as a child. While there’s only limited information about Jilly’s online, I’ve asked around and a few friends have since told me that they enjoyed the old Place for Ribs. If you’re among their number, swing by this oddball restaurant and see whether your own nostalgia might be tickled a little.