I’ll tell you, friends and readers, it is always a pleasure when a new, good, local barbecue blog sets up shop and makes an effort to use Urbanspoon to connect with readers. I’ve mentioned previously that there are a few awesome ones in the region, such as Buster’s BBQ Blog, Chopped Onion, and Where’s the Best BBQ?, that just don’t have any interest in connecting with readers through Urbanspoon, and I think that’s a shame. It’s easier for readers to catch updates, and it brings them extra eyeballs and traffic with very, very little work. Seriously, scroll to the bottom of this entry. See the little blue and yellow box with the restaurant address? It takes fewer than five seconds to add to each entry, and it brings me more than a thousand visitors a month. Everybody wins.

Happily, when The Georgia Barbecue Hunt started writing his fun blog, he used Urbanspoon, allowing me to become a regular reader very early on. This is a great blog, and one that all of our local readers should definitely be checking out. The writer is a Texas native, living nearby, here in Cobb County, and he updates about once a week with his take on how the regional scene stacks up against the expectations he’s brought from the Lone Star State. I knew that it wouldn’t be long before he uncovered a place that I did not know, and, sure enough, in September, he gave a very nice review to an unfamiliar place about ten miles up Bells Ferry Road, between Eagle and Towne Lake. Now, I disagree with Dustin pretty strongly from time to time – I think that Smyrna’s Thompson Brothers is much better than the review that Dustin gave it – but a 4-star rating like the one that he lovingly gave to JD’s Bar-B-Que is enough to get my attention. I resolved to check this place out.

JD’s opened in 1999 as a take-out window in a nearby farmer’s market and moved to this building in the summer of 2003. They opened a second location in Acworth earlier this year. The owner’s name is Chip; the J and the D of the restaurant’s name come from his late brother, Jeff, and father, David. He does his family proud with this food. I mostly agree with Dustin’s feelings about this place, with only the mildest quibbling. I did like the chopped pork more than he did, but I didn’t order the brisket, which is what had him really raving. Marie and I definitely had a solid and enjoyable dinner here and would certainly recommend anybody in the area give this a try. Here’s what my plate looked like before I dropped the table’s paper towel dispenser on it and scattered chopped pork everywhere: 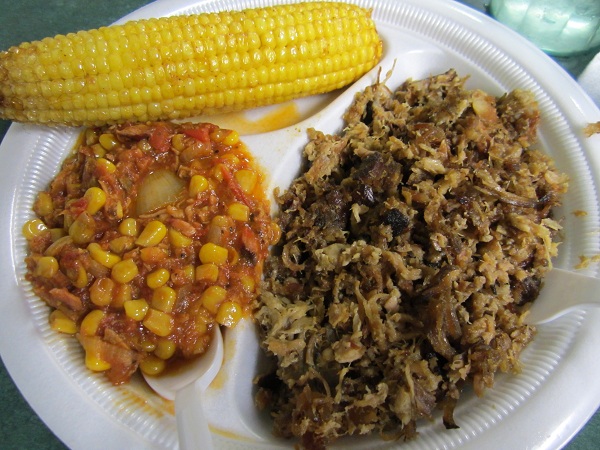 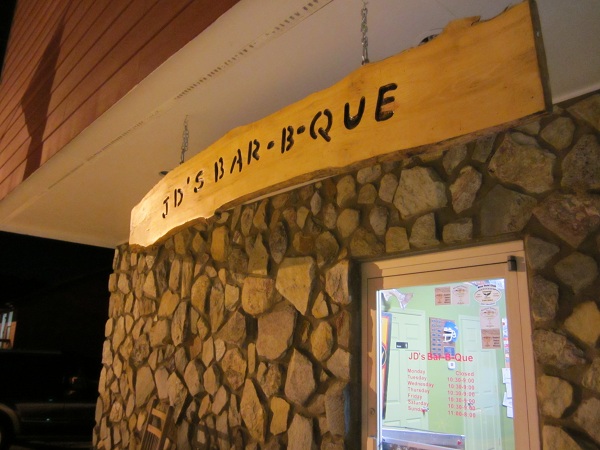 You want to talk about mortifying? We had the baby in his car seat on the table, and I reached around him to bring the paper towels over to our side of the table, didn’t have quite the grip on the wood that I should have, and it looked like somebody set off a bomb. I wasted two or three good forkfuls of my supper!

The chopped pork is dark and dry. It has a very similar texture and taste to The Georgia Rib Company in Marietta. Well, maybe not that similar. Nothing outside of a desert is that dry. There are two sauces here, a sweet brown that the meat really needs for best effect. It’s a good combination, and quite tasty. There is also an allegedly spicier version of the same, but the difference is barely noticeable.

I had my plate with some Brunswick stew, and the server talked me into trying their fried corn on the cob after we determined that both their fries and their onion rings are, sadly, not house-made but frozen. This corn was completely delicious, and I certainly recommend it. On the other hand, had I known that the stew here was packed quite so heavily with corn, I would have passed on it in favor of the cole slaw. There’s only so much corn that a fellow needs! That said, it was still good stew, nice and oniony, but just more of one particular vegetable at a sitting than I would have liked.

Marie had slaw and baked beans along with her ribs, and enjoyed the meat much more than the sides. They were really excellent ribs, with barely a nibble of fat, and the pork was incredibly tender. I thought that my chopped pork was just fine, but the ribs were much better. The only downside were the baked beans, which were really packed with garlic, to the point that neither of us could enjoy them.

It was a good, inexpensive Friday night supper, punctuated by the amusing sounds of the pinball machine near the door. I apologized for the childlike mess left behind by my idiotic paper towel bomb and we drove back south. Between Black Friday shopping and work and the baby getting extremely cranky and upset in the middle of the afternoon, we were spent and exhausted and called it a night at something ridiculously early like nine. Every so often, as a group with the silly name of Balloon once sang, after we’ve lived each minute as three, we end up feeling our age.