The day after Thanksgiving, I spent the morning exhausting my baby boy. He started crawling the day before, and, with his day care closed and potential baby sitters out of town, I took him to work with me. It was one of my short shifts and he got appropriate levels of admiration and tickling, and really showed off some crawling. We then drove to Dunwoody to visit Marie at work and allow her to nurse him and visit with her co-workers, and then he and I went to lunch. He missed it entirely. He fell asleep on the way there, and snoozed all the way through the meal, only waking when we returned home to the suburbs.

Completely overshadowed by the celebrity-driven launch of Hd1 has been the debut of a great little place right at the northern end of Buckhead called Ringside Franks & Shakes. It’s another hot dog joint and, if I might be bold, one quite superior to the flashy and expensive place down in Poncey-Highlands. With the closure of the barely-inside-the-perimeter America’s Top Dog – mercifully, its Duluth location is still with us* – Ringside makes a good case for being one of the best hot dog options ITP.

It’s owned by Mike Nelson, Clay Harper and Jeremy Kelly. Nelson and Harper also own the locally popular chains La Fonda Latina and Fellini’s Pizza, and this is located in a building right next door to the La Fonda and Fellini’s on Roswell near Wieuca. In a refit worthy of a spotlight at Not Fooling Anybody, the building looks a whole lot like it was a Taco Bell in the 1970s before spending decades as a Wolf Camera. Nelson and Harper briefly played with a frozen yogurt stand in the building before settling on hot dogs and sausages. The result is inexpensive and very tasty. 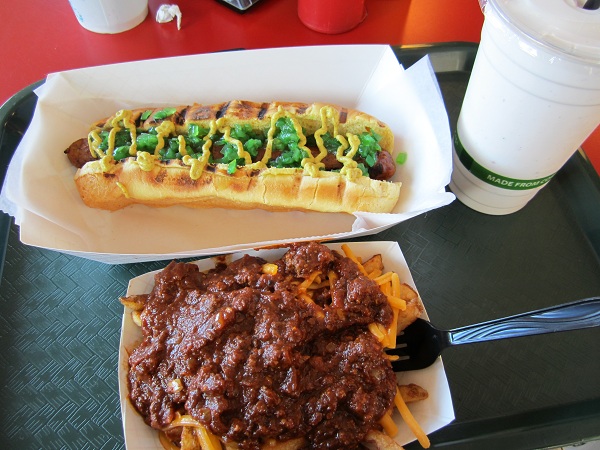 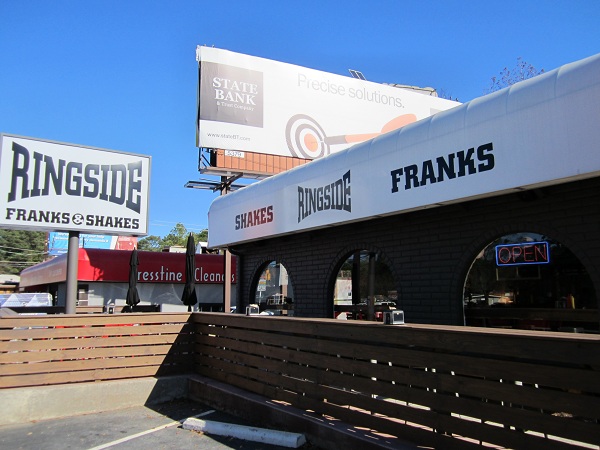 Other hobbyists and bloggers have slowly been finding this place and enjoying it. I quite liked reading Spice’s Bites‘ writeup. She helpfully included photos of the menu boards, one of which assures guests that their meat includes “NO MSG, No Fillers or Animal Byproducts added, No Artificial Flavors/Colors, No Corn Syrup Ever, No Irradiation Ever, NO JUNK EVER.” I sure do like the sound of that. The meat comes from Wienerz in Marietta and the bread, reports Foodie Buddha, is delivered daily from Entemann’s Bakery in Norcross. Food & Beer Atlanta‘s Tom Maicon notes that, if you pay attention to the costs of your desired toppings, you can feed your family here for under $20.

Charging for some of the toppings puts this pretty far behind America’s Top Dog, in my book. There’s nothing here remotely like that place’s awesome 40-item topping bar, although almost everything that they serve up is still really good. I had a chicken sausage with spicy mustard and neon green “Chicago” relish along with a side of chili cheese fries. I wasn’t mad about the chili, but the fries that it covered were very good, hand-cut and cooked in peanut oil. The sausage was terrific and the bread, grilled to give off a little pattern of char across the top, was just wonderful.

I added a mixed vanilla-strawberry milkshake, made with Breyer’s ice cream, and happily drove home with that. The milkshake was a payday indulgence; without it, my meal would have been only eight bucks and incredibly filling. When Marie and I had supper many hours later, I still really wasn’t very hungry.

*Well, it was, for a few weeks after this entry was originally posted, anyway.