Several weeks ago, when Marie and I went to a little media event for Outback Steakhouse, we got to meet several area bloggers, including two writers from Exclusive Eats, and shared some favorite restaurants and meals. Asked about my favorite sushi, I found myself unable to come up with anything other than Ru San’s. I mean, I know that I’ve had sushi in some other places – I was taken to a surprisingly good place in Macon once – but, at least since we began the blog last year, we’ve only ever gone back to one of Ru San’s stores.

I’m also aware that their reputation is less than sterling. I don’t know whether there’s a culture of sushi snobs that gets as uppity and adamant about things as some of us barbecue bloggers are known to do, but finding bad reviews of Ru San’s is not difficult. I think that’s a shame and genuinely don’t care what people say; I think that Ru San’s sushi is just fine. But Exclusive Eats did remind me that, in order to provide a more well-rounded blogging experience for our readers, we should probably sample a few other restaurants in each category, and so I resolved that we would try some different sushi someplace else when the chance came.

A few Saturdays later, as related in the previous chapter, we were “enjoying” a relaxing weekend without any plans whatever, which meant that I paced back and forth, restless, until the Bulldogs game started on Peachtree TV, and resumed pacing restlessly as soon as it finished. I asked Marie what she was in the mood for, since, lack of plans be darned, we needed to eat something. She suggested we go to Ru San’s for tempura and fried rice, and I suggested we give someplace new a try. Marie doesn’t actually care for sushi, madly, but she does like tempura vegetables and, occasionally, a ridiculously oversized and gigantic bowl of soup. I looked around and saw that Atlanta Restaurant Blog had given a not-entirely positive review of Kuroshio, which is only a few minutes further away from our neighborhood’s Ru San’s, but I read there enough promise to give them a chance. Additionally, “Kat Food,” an online acquaintance, called their chicken fried rice the best that she’d ever had. So did it deliver for us? 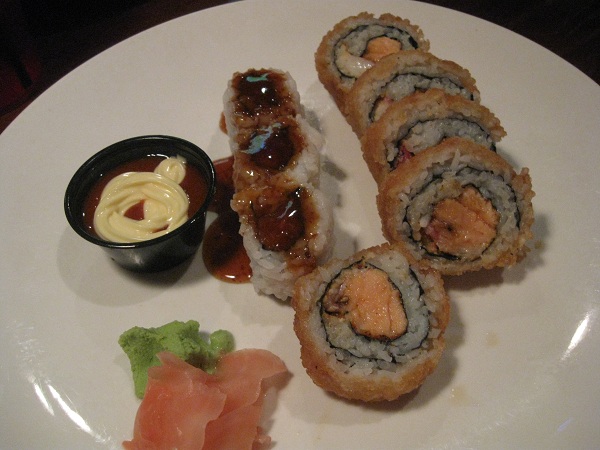 Honestly, two out of three things ordered, I would have been just as well or better off sticking with Ru San’s. The chicken yakitori sticks were just the driest and most tasteless chicken I’ve ever had, and I ended up eating them soaked in sticky sauce and the carrot garnish just to give the meat some flavor. On the other hand, the UGA Roll, which I ordered in celebration of our beating Kentucky and winning the SEC East earlier, was pretty good. I’m wondering how it got the name; it’s a mix of salmon and tilapia with a gooey sauce, fried with a crispy coating. I liked it, but I know that I’ve had better. On the other, other hand, I added a little order of spicy tuna from their dollar menu, and Ru San’s doesn’t have anything at all even remotely that good on their daily specials. This tuna was completely fantastic, and I loved the thick brown sauce. I’d have done better to have just called for four orders of that, and then I’d be raving about it.

Marie had some very good tempura vegetables that she enjoyed, and confirmed that the chicken fried rice was excellent. Other than my disappointment with the chicken sticks, we were very pleased with our supper here, from the service to the very nice, relaxed and comfortable design of the interior. It’s certainly worth another visit, but I figured that that we’ll try to expand our knowledge base a little the next time the mood struck us.

There’s a place called Sushi Bites that’s right around the corner from Kuroshio, but the first place that we went after making this resolution was several miles south. We hadn’t been back to Yakitori Jinbei in Smyrna since we went there with Randy and Kimberly after we saw Miyazaki’s film Ponyo. Yes, we went to a Japanese restaurant for lunch after seeing a Japanese cartoon. We’re predictable that way sometimes. Similarly, this place gets ridiculously busy once every September when Anime Weekend Atlanta is going on about a mile down the road. 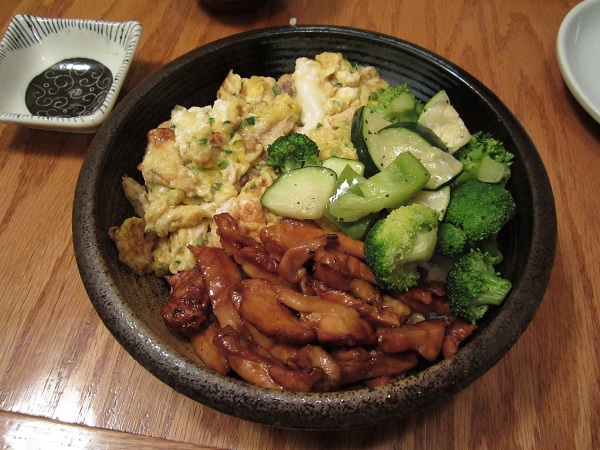 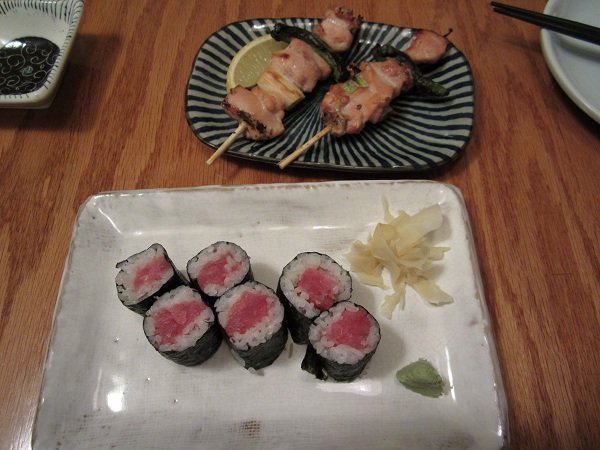 We visited about two weeks after the trip to Kuroshio. It’s a very small little place in the same strip mall as Thompson Brothers Bar-B-Q, and I first went over here with David about four years ago. They specialize in yakitori, which, if you didn’t pick up on it before, is kind of like Japanese kabobs, various meats and veggies on short skewers. Here, the yakitori is grilled over imported binchōtan oak charcoal, and that is said to make all the difference. The yakitori is served either with a dark, sweet sauce or with sea salt.

The children and I met Marie here on a Friday evening when the traffic was particularly hellish, sparing her at least part of that bad commute. She had a teriyaki chicken bowl, with rice and vegetables and an insensibly tasty egg. My daughter had the basic starter order of yakitori, three skewers of chicken with the sauce, and an order of California rolls. I had the yakitori negima, which they describe as young chicken, served with grilled onions and peppers, and an order of spicy tuna sushi. The prices here are considerably higher than Ru San’s, and came close to $45 for the three of us after the tip, but the meat was so much better. This was some of the tastiest, juiciest chicken that I have had in quite some time, and I could have gladly indulged in more.

Interestingly, reading some of my fellow hobbyists’ opinions about this place – good grief, just about everybody local’s reviewed it – it seems that this is one of the very best places in Atlanta for ramen. I’m rarely ever in the mood for that myself, but Marie occasionally gets a craving. Perhaps we’ll give the ramen a try the next time.

A couple of days later, we gave Sushi Bites a visit. Somehow or another, the chicken yakitori here conspired to be every bit as dry and awful as the stuff at Kurushio, but the rest of our visit was quite nice. Neal joined us, and he ordered what they call a Monkey Roll, a mix of smoked salmon, cream cheese, cranberries and jalapenos, and said that it was very good. He also enjoyed the bacon scallop yakitori, which I promised myself I would try the next time. My spicy salmon sushi was not bad, and I enjoyed the shrimp tempura. My daughter had chicken yakisoba, and Marie had an order of pork fried rice.

We liked everything except for my chicken yakitori, and also liked the price. The food is mostly just as good as Ru San’s, and the service was charmingly attentive, yet scatterbrained. Early on, having delivered our drinks, our server asked whether we were ready. Indeed we were, for menus.

Of the three, Yakitori Jinbei was clearly the best, but it was still nice to find some very reasonably-priced alternatives to Ru San’s in our neighborhood. Having said that, now that we’ve gone out for fried rice three times in a month, it’s possible that Marie is now satisfied enough that we may not be back to any of them any time soon!

One thought on “Sushi in the Suburbs”