There are coincidences and connections all around in the restaurant business. Sometime in 2008, I read some people on a message board raving about Big Shanty Smokehouse, up in Kennesaw off Wade Green Road. I took the children up there for what would be the first of many terrific meals, and we noticed, along the way, this little burrito place in a strip mall closer to the interstate. I said then that, one of these days, we needed to stop by and give them a try. It was not a priority, as longtime readers might have read, as I have been losing my taste for, and interest in, American-styled burritos and tacos. Somebody really needs to prompt me to go get a burrito anymore.

So several months passed, and we drove up there one Sunday, only to find them closed. They don’t open on Sundays. They also take a short vacation and close down around the Fourth of July every year. I know this because around that date in 2010 and again this year, we tried coming by and, stymied, left with a shrug.

A couple of Fridays ago, we decided it was time to let Marie relax for a weekend. We complement each other very well, I think, but one way that we have really started to differ since we had the great emotional drain that is a baby is that I spend all week antsy for the freedom to get out and drive and relax by getting up at the comparatively late hour of about seven and finding someplace miles and miles away to eat, and Marie, who’s much more of a workaholic and has a more demanding desk job than I do, and could, given the chance, sleep for a whole lot longer than anybody, enjoys the occasional weekend where she can stay in bed until ten – ten! – and not do anything for two and a half days. Weekends where I really, really relax leave her completely exhausted, and weekends where she really, really relaxes leave me completely unfulfilled. We compensate by allowing me weekends where I overplan and completely fill it with things to do – oh, and I’m two months away from the most awesome weekend ever – and, once in a while, allowing a weekend with not a single thing on the agenda.

This was one of those Fridays. I asked what we were doing for supper and she said that she’d simply like to get a burrito from Willy’s. I suggested that we might could go a few exits up and give Buckhead Burrito Grill one last try. If they weren’t open, we’d come back to Willy’s. Not only were they open, and excellent, but we also learned that they moved to this location from the very space into which Big Shanty Smokehouse, the restaurant that we visited when we first saw these guys, opened. If the Buckhead Burrito Grill had not been successful enough to move into a bigger place with more parking, then the Smokehouse would not have started up in the space that they vacated, and we would never have seen this “California-style” place. Well, I think that it’s weird, anyway. 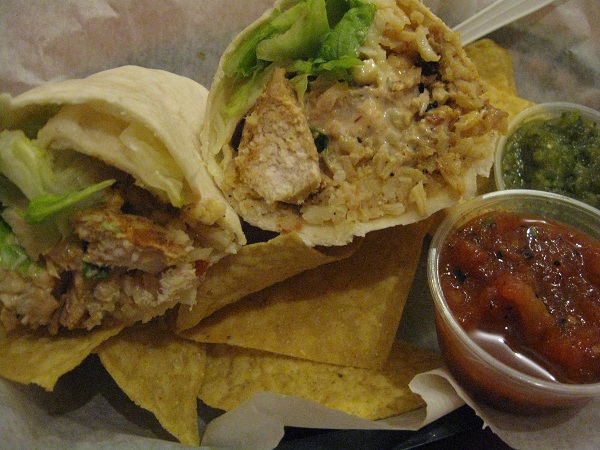 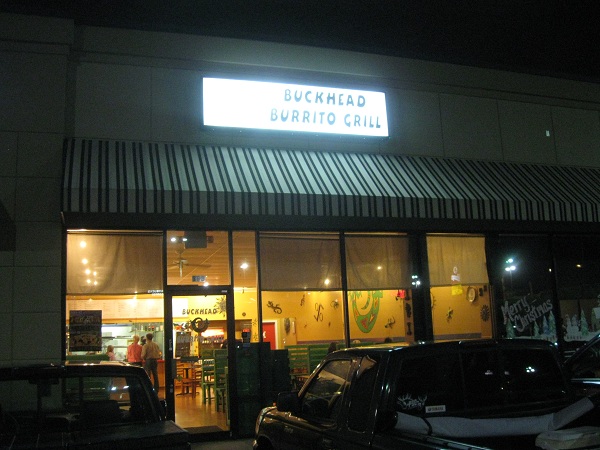 Bob and Melissa Ross started the restaurant, so named because, when they opened about ten years ago, they felt that you had to drive down to Buckhead to get a decent burrito, and they still own it. We didn’t know when we arrived that their signature item was the fish taco, and so Marie and I each had burritos. She had the “house” style, made with your basic chicken, rice, beans, cheese and pico de gallo, and I had the “Rio” style, which was chicken, rice, cheese, lettuce, and two sauces, one a hot red sauce and the other thick, creamy and peppery. They were both perfectly acceptable and tasty, probably better than what we would have had at Willy’s and leagues better than what they sell you at Moe’s. I feel like they could probably spare a few more chips in the basket, however. The salsa bar here is stocked with really terrific and tasty blends, even if, like most places, they offer little plastic dipping cups that are just too darn small, and I would have gladly indulged in many, many more chips after I finished the puny number that came with my meal.

There are a couple of newspaper reviews on the wall here, and after we read those raves, we realized we probably needed to try the fish taco. This thing deserves the hype. It’s tilapia fried in a batter full of ingredients that the woman at the register would not divulge, and served with onions, cabbage, cilantro and a really unique jalapeno yogurt that they call “Mexican tartar sauce.” Marie liked it more than I did, and I liked it a lot.

They seem to rotate their unusual desserts, which are usually deep-fried American snack foods served in a burrito with whipped cream. When we went, Snickers were on offer. Personally, I don’t like Snickers at all – a friend in middle school once described the sensation of spitting out little peanut crumbs two hours after he had a bar and I’ve never forgotten the accuracy – and so I passed, but my daughter just loved it.

Honestly, it was good to finally try this place. It’s not my favorite type of food in the world, and, to be honest, I’d be happier driving a little further down to the Smokehouse, but the fish tacos were quite surprisingly good. The next time that Marie gets a hankering for California-styled Mexican food, we’d do all right to see whether this place is open before trying anybody else in the area.