Every so often, dealing with teenagers, you hit a wall. A couple of Saturdays ago, we told our daughter to get ready, as we were going out to lunch. She asked where we were going, and Marie said that we were heading out for cheesecake.

“Ugggh!” she replied. “I hate cheesesteak!” This was a remarkable response, considering that she has been known to devour a good cheesesteak.

“Not cheesesteak,” Marie said. “Cheesecake.” She said that she hated cheesecake even more, an equally remarkable response. Well, we may not have a really shining track record at raising teenagers, but we’ve enough sense of self-preservation to know when it’s best to leave the girl at home to eat ramen and not ruin our meal by being terrible company.

The Atlanta Cheesecake Company is a bakery a few exits north in Kennesaw, on a road just below Buckhead Burrito Grill and Barbecue Street. You really have to know about this place ahead of time; it’s not very likely that your personal business would take you past it, and if it did, you’d probably not realize that the big office building that houses their bakery, delivery and mail order services has a restaurant that is open to the public. It simply looks like a big medical records place, or a call center, but it has a small and elegant cafe that is open for lunches. 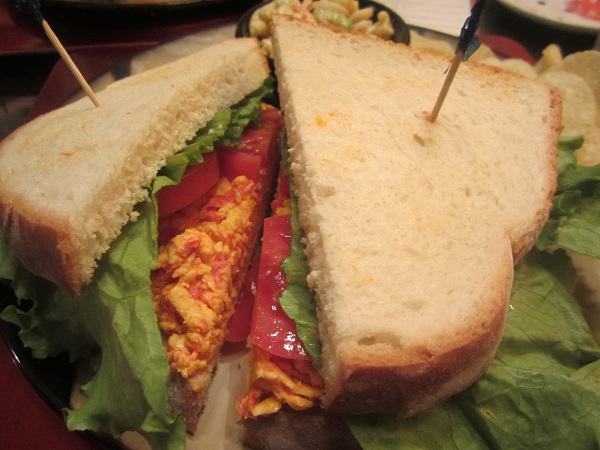 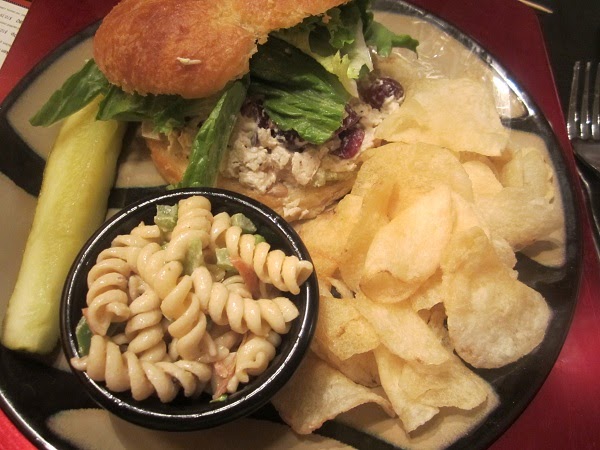 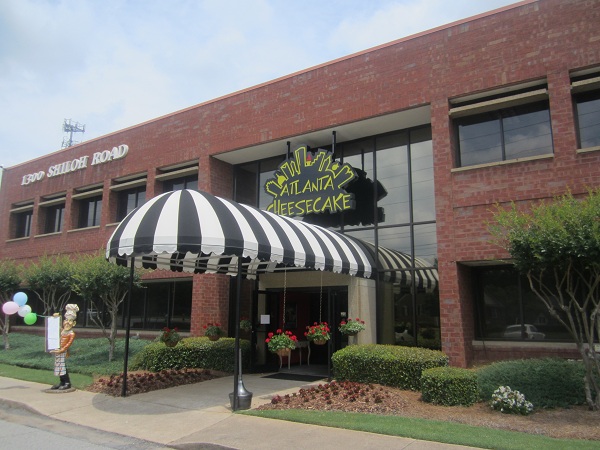 The cafe is very nicely designed, although the furnishings have been subjected to a surprising amount of abuse from guests, with a little torn upholstery visible. It’s a great little getaway for Ladies Who Lunch, or for people planning parties or weddings who’d like a sandwich or a bowl of soup as they sample desserts for their guests. There are racks of magazines tucked here and there among the booths, so that guests can read back issues of Bon Appetit or Food Network while waiting for their lunch, which is preceded by a little taster snack of cake bite truffles.

I had the pimento cheese sandwich and it was beyond enormous. It was a really great recipe and served on gigantic slices of bread. I had half of the sandwich for lunch the next day. Marie ordered chicken salad, which she really enjoyed. It was served on a slightly smaller bun than mine. Each of our sandwiches came with chips and a side. We both just went with pasta salad.

I passed on dessert, but Marie spent a few minutes looking over her options before settling on a slice of cheesecake with strawberry topping. My photos of this were particularly hideous, and I hope you’ll understand that’s why I didn’t include one in this chapter. It does seem a little silly that we went out for cheesecake and I didn’t bring you back a picture of one! I had a bite and agree with Marie: it is perhaps not transcendent, but still very, very good. If you’re among those who always think of big chains like Copeland’s or the Factory when you are in the mood for cheesecake, I would suggest that this place is every bit as good, if not better, than those, and locally-owned. It’s a fine suggestion for a very quiet getaway, maybe two minutes from the interstate, which nobody seems to know about. You can get there before the word gets out.