As soon as I learned that there was a place called Moxie Burger in Cobb County – it’s in Paper Mill Village over off Johnson Ferry, where Cobb thumbs its nose across the river at Fulton, taunting “Ha-ha! We have more lanes than you!” – I wanted to visit, because I am shallow enough to appreciate businesses just because of their name. Very, very few people around these parts seem to care for the soft drink Moxie. If locals have even heard of it at all, it’s a surprise. Most people who do try it recoil from the bitter taste, baffled as to how something that still has fizz could taste so flat.

Even plenty of Yankees object to it. When Marie and I were in Vermont three years ago, I stopped by a gas station and bought a 16-ounce Moxie, and the older lady at the register told me that she’d lived there almost all her life and had never tried one. Everybody she knew had told her not to. “You should ignore those haters,” I told her.

I mention this because, one Saturday evening last month, Marie and I brought the baby to this new place, navigated a ridiculously huge crowd of families who are just knocking this place over, and I spotted a 16-ounce bottle of Moxie in the window between the registers and the kitchen. The gentleman asked what I was drinking and I replied “Heck, if you actually do carry Moxie like you have there, I’ll have one of those.” But no, it was only decoration. Turned out I was speaking with the manager, Brandon Eisenhart. He told me that he wouldn’t carry Moxie even if he could get a distributor here. “It would never sell and everybody hates it.”

He’s probably right. More’s the pity. We had water. 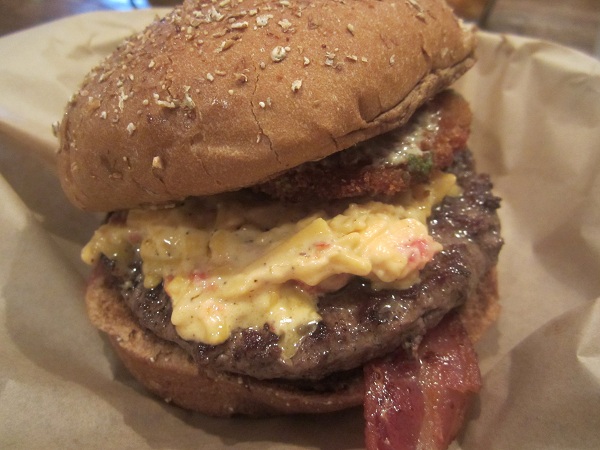 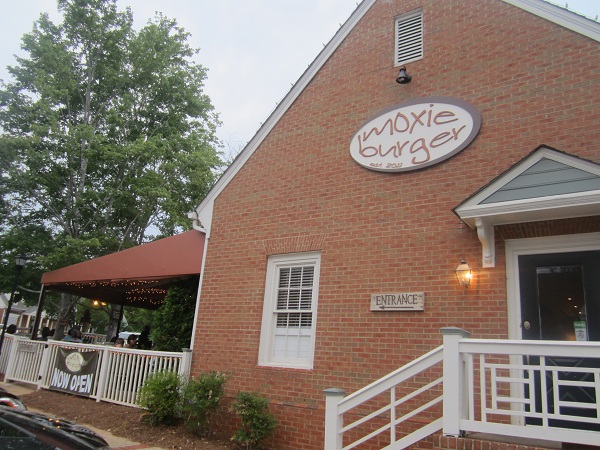 We also had some impressively good burgers. Marie just went with a basic build-your-own and kept it simple, while I tried the fantastic house special. The moxie burger comes with bacon, pimento cheese, and fried green tomatoes with a smear of the house sauce. This is that ubiquitous stuff that tastes like ketchup with mayo or thousand island dressing that every other burger place around Atlanta makes and calls their house sauce.

In fact, it’s very much like the sauce at Village Burger in nearby Dunwoody, which makes sense, as the entire experience was very much like Village Burger. It really feels like a good neighborhood hangout, more than a destination. It seems to keep to itself and has been rewarded with surprisingly big crowds. The hand-crafted burgers and hand-cut fries are all better than average, and they keep the taps flowing with an endless stream of typical ballpark beers.

Overall, it’s a fine little place. I doubt that we will be frequent guests – it is not quite our neighborhood, after all – but certainly, once the baby is finally walking, I’m sure he will love to join the crunch of the gaggle of other kids at the play area at the patio while Marie and I enjoy good burgers. Isn’t that just beautifully suburban? I can imagine some of our childless, intown friends just cringing at the thought.

A couple of weeks later, we brought the girlchild along for a second visit. We were in the neighborhood, planning to stop by Christos’ Pizza for lasagna, only to find that place surprisingly closed, and preparing to reopen under a new name a block and a bit away. So we came back to Moxie instead. Marie was so taken with her build-your-own with lettuce, tomato, cheddar cheese and avocado that she had another one, while I tried the Heater, which is served with jalapenos, spicy ranch and a hot sauce. I didn’t think it nearly spicy enough, and not a patch on the fabulous moxie that I had on the first trip, but it was still a very good burger and a fun trip. Definitely get the fries with pesto mayo on the side like we did this time, as they go perfectly together.