So Johnny Rockets, a deeply 1980s concept restaurant which occasionally attempts to evoke the 1950s, invited some local media to come visit their newly reopened store at Phipps Plaza and learn about their company. The store in the Phipps Plaza mall had been there for many years, but the entire mall food court was gutted last year, along with several clothing stores on the upper floors, to make way for the Legoland Discovery Center. By all accounts, this attraction is doing very good business – there seems to be a ridiculous amount of things to do here – but the restaurant’s shindig was held at the time that Legoland closes each weekday, so we didn’t see any rampaging mobs of children, or gangs of obsessed grown-ups desperately digging through the bins in the gift shop looking for the last, elusive bricks that they need in order to replace the red half-height two-by-sixes that they lost when their Harry Potter Quidditch set fell off the mantle and some of the Legos fell into the fireplace.

Yeah, that’s right, I said LEGOS. I PLURALIZED your brand, Lego. And I might do it again.

I’ve always been a little fascinated by the world of marketing as it envelops and restricts concepts like Lego, and like Johnny Rockets, and Moe’s Southwestern Grill, which is located next door. (“Remember, kids, you can’t spell MEDIOCRE without M-O-E.”) Actually, while writing the first draft of this chapter, I realized that I was not spelling the restaurant in question correctly. I was giving it an apostrophe, because I thought, for decades, that the idea was this place was meant to evoke a 1950s rock-and-roll diner, as though it was owned by a fellow named Johnny. Turns out that the name came from the merger of Johnny Appleseed and the Oldsmobile Rocket 88. According to the restaurant’s web site, this name evokes “the concept of classic Americana and the promise of the future.”

The result is an incredibly odd and very silly experience, enlivened massively by an all-singing, all-dancing staff of hamburger flippers and servers who break into enthusiastic dance routines every ten minutes or so. This was new to me; I have only visited smaller Johnny Rockets stores before, which are evidently too little to allow room for the dancing. So is this place, but the staff rushes out into the mall corridor and does their dances to classic rock oldies in front of the counter. I was not surprised to learn that Johnny Rockets has opened locations inside various amusement parks; it is a Disney version of what people wish that hamburger stands had been like in the 1950s. 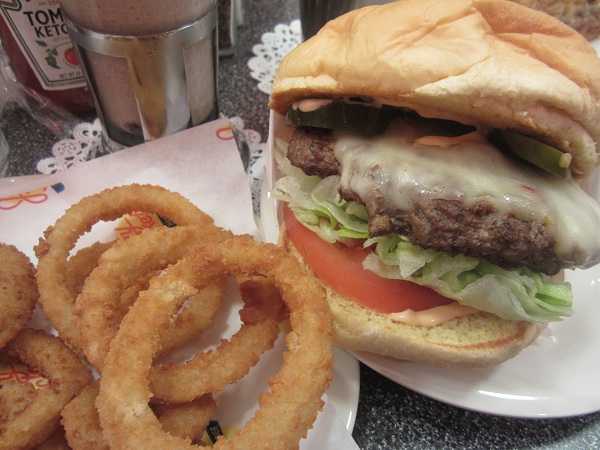 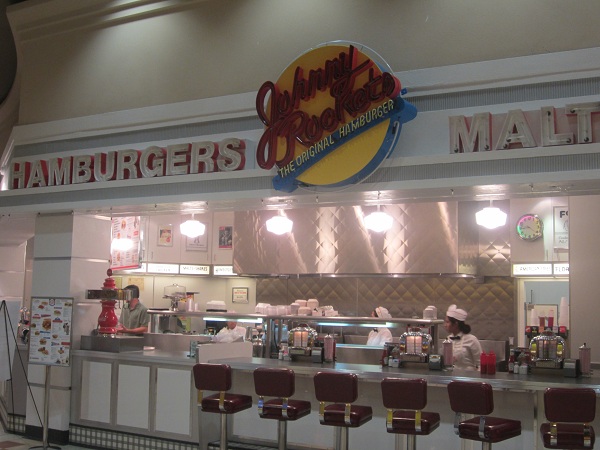 Really, though, the people here hope that guests just kick back and relax and not overthink things the way that I certainly do. They’re out to win loyalty by giving guests a really good time, and if the smiles on the kids that we saw here are any indication, they’re succeeding. Much in the same way that my experience with a superlative pizza can be lessened by having it served by grouchy or inattentive staff and restrictive rules and signs (see Antico), my experience with average food can be brightened by having it served by people acting like this is the greatest job in creation, and who are willing to do whatever is necessary to ensure their guests are having a ball.

The burgers here are a little bit better than standard fast food burger patties, enlivened by a larger-than-normal set of variations and toppings than guests might expect, but unfortunately, the fries are the sort of awful, frozen delivery-truck fries that lose their taste and flavor immediately upon cooling. Part of their shtick here is to draw a little smiley face with ketchup when they deliver the fries. Perhaps this is meant to distract from the reality that these fries taste horrible. The onion rings here are much, much better than the fries, thanks to a decently seasoned and sweet batter, and go well with the burgers. Interestingly, Johnny Rockets offers a sensible “half-and-half” combo of each on their menu of sides, which every restaurant should follow, although why on earth any restaurant would serve fries this bad is beyond sense. I had a Houston burger, which was not quite as spicy as I expected but perfectly tasty, and Marie had a patty melt, which she enjoyed, with the caveat that there were rather more onions on it than she was expecting.

The truly exceptional part of the meal was the milkshakes. Honestly, we could talk for hours about Johnny Rockets and their overreliance on trucked-in, frozen food with the prominent labels of national brands visible everywhere you look, and how much better the food would be if some freshness was apparent, but these milkshakes are downright amazing. I had a cookies and cream and Marie had a chocolate banana – we seem to have defaulted to our go-to favorite flavors here rather than trying something new – and they simply do them right here, with the resulting treat being really thick and rich and creamy. This may sound ridiculous, if not downright blasphemous, but these shakes – and they brought out samples of several other flavors – really are in the upper tier of what’s available in this city. They assuredly don’t have that watered-down taste that I’ve been detecting at certain other places during their “half-price” sale period.

If you’re wanting a good milkshake, then Johnny Rockets is a good place to go for a little getaway, just a simple hangout to visit with friends while waiting for a movie at the AMC here at the mall, or for your kids to finish brick-building in Legoland. We certainly enjoyed talking with Rebecca from Atlanta Foodies, and meeting Danielle from Dine With Dani, and saying hello to some other area bloggers, but I don’t know that any of us were really talking about the food so much as we were just having a pretty good time. I wouldn’t object to spending time with company here again, because eating out should be fun, but it’s not the sort of place that I’d retire to by myself while reading a book, if you take my meaning.