For the first time since starting the blog, Marie and I were waylaid one weekend by a plague. It was not the fault of any restaurant; rather, the toddler brought it home from daycare. So it was that, after a pretty good Friday lunch at Pho Dai Loi, and, after Marie’s brother Karl arrived for a weekend stay, a downright excellent supper at Moxie Burger, we spent Saturday in bed being awful hosts, asking the girlchild to step up and watch the baby, and left Karl to the TV and books. I was too miserable to even try to watch the Dawgs get five yards from beating Bama.

By midday Sunday, having phoned in to work, I was feeling better and climbing the walls. I just had to get out of the house. I was due for some cheap gas at Kroger since I had some points to cash in, and since my Saturday intake had consisted of half a waffle and two liters of Powerade, I was ready to eat something. A few weeks previously, we’d dropped the girlchild off to visit a friend who lives behind Windy City Grill, a new little place that opened this year in one of those cursed restaurant spaces. You know the sort: I’ve lived at this address since 2003 and seen at least three restaurants in this building, including Aunt B’s Oyster House, Telecotes Grill, and Highway 5 Wings, come and go. Bappi Rahman and his family opened in the late summer offering breakfast, burgers, and Vienna Beef dogs. I figured I’d give them a try. 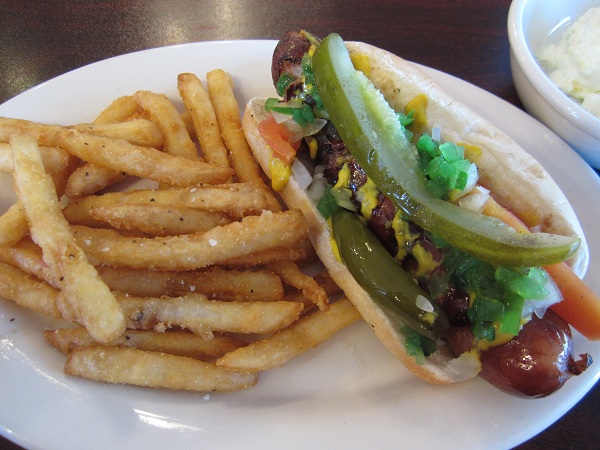 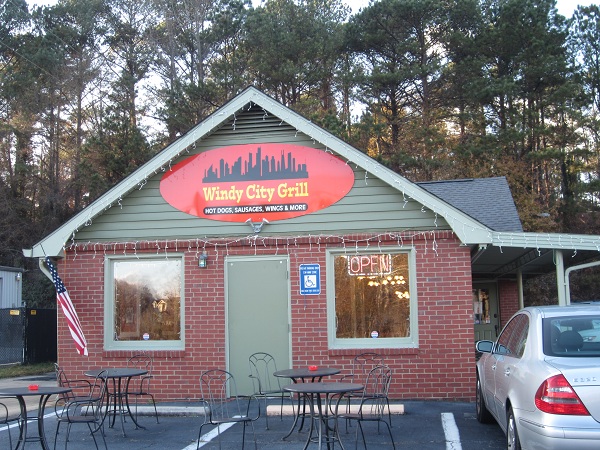 Boy howdy, did this ever hit the spot. I really needed a simple dog done right and, in deference to the very low calorie consumption of the previous day and a half, I indulged and had a side of potato salad. Longtime readers may recall that I very rarely have this anymore – it’s among the costs of trying to eat a little bit better – but I treated myself.

The dogs here seem to cost a little more than some of the other Vienna Beef places in Cobb, but they also come with a side, typically homemade chips. The only disappointment was that these weren’t available today. My server explained that they were trying out a new produce company, and the potatoes that they brought didn’t make for really good chips. But that was okay. I was just glad to be out of the house, enjoying a Polish sausage done Chicago style and watching some football – the tail end of the Miami loss to New England – pleased to be feeling better, and very happy to be enjoying some good food again.