Here’s an example of some pretty nontraditional barbecue. Waikikie would probably not have shown up on my radar if they didn’t have “barbecue” in their name, as what they serve isn’t much like pulled or chopped southern-style pork or chicken. It’s a very curious little place on Briarcliff just north of Lavista Road that serves a pretty fun lunch.

Hawaiian-style cuisine incorporates influences from lots of different places, but Japan seems to be the principal one. They use lots of teriyaki here – and the house barbecue sauce is, again, teriyaki – and chicken breasts served katsu-style, with a light fried coating. The dinner combo plates offer two meats over a little bed of cabbage, along with two scoops of rice and one scoop of a remarkably tasty macaroni salad. Some of the meats are swiftly grilled over charcoal, and that’s all of the “barbecue” that you get here. It’s not bad for what it is, but what it is not is “low and slow.” Should I return, I think that I’ll probably stick with the Asian-influenced dishes and the macaroni salad, as I really liked my katsu chicken and the side, while the “barbecue” was less than thrilling. 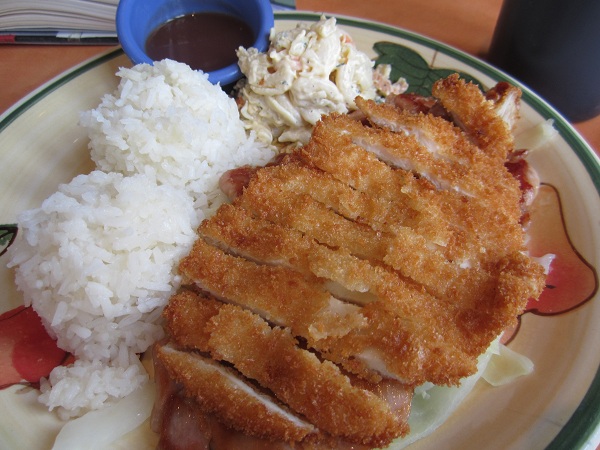 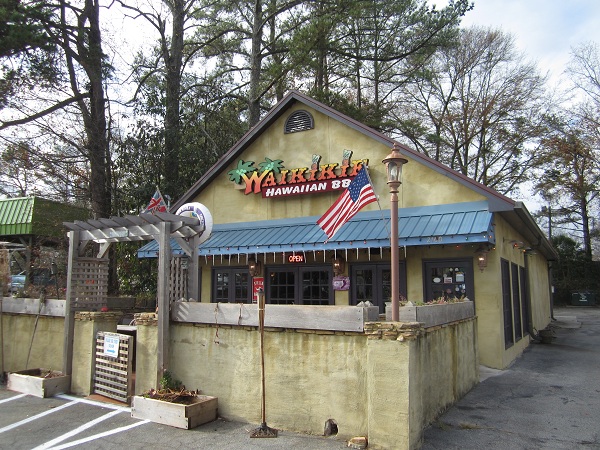 Waikikie opened in 2004, and the owners chose the unfamiliar spelling to avoid confusion with an existing chain of Hawaiian-style restaurants on the west coast. It is decorated in the expected over-the-top style, with colorful shirts and tiki torches. I certainly enjoyed the food when I stopped by, but my lasting impression, bizarrely, will probably be of TV’s The Price is Right.

I’m not sure whether the few other guests on this Thursday morning were regulars who usually step in to eat and watch this show or whether they just got into things along with a couple of the staffers, but the TV was ridiculously loud and everybody was having a terrific time playing along with the show, shouting out prices and groaning appropriately when guesses went over the actual retail price. It certainly made the nicest possible change from going someplace where everybody was trying to ignore the political propaganda on some dumb “news” channel or other.

Other blog posts about Waikikie: