In the previous chapter, I reported that my mercurial teenage daughter had, abruptly, turned on hot dogs with a vengeance. It’s best not to challenge teenagers when they’re in the middle of one of their seismic changes of mood; it’s best to ride it out and whack ’em with reality a few days later.

So it was that, five days later, my daughter was out of school and it was time to take her to get something to eat. “We’re going to a couple of places to get hot dogs,” I told her. Her eyes bugged out and she was about to protest before I shushed her. “Don’t even. You loved hot dogs your whole life, and I’m not dealing with you being contrary just because. Shush and get your shoes on.”

I had it in mind to have a couple more Vienna Beef brand dogs, but I felt like visiting two different places to enjoy them. First up was the nearby location of Hot Dog Heaven. The original, a few miles north in Woodstock, is the more popular and well-known of the two, but there is another on US-41 between Barrett Parkway and McCollum Air Field, which opened a few years ago. It is in a very unassuming building with outdoor seating on a covered porch. Both stores are owned by Barney and Becky Wentzel, but if I understand correctly, Miss Becky stays with the Woodstock store while Barney works in Kennesaw. 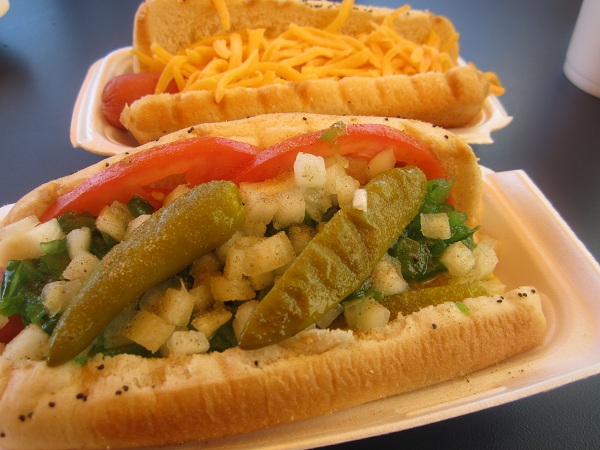 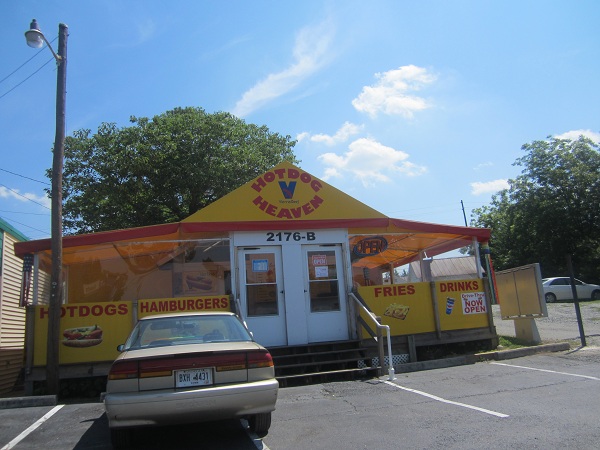 As mentioned in the previous entry, there really is not a lot of difference or variation in what you get at Vienna Beef stores. The company exercises some pretty strict quality control, regardless who is selling their product, because they don’t want anybody to associate a bad experience at some place with all of the dozen or so signs for various Vienna Beef products around any given restaurant. It’s telling that, in much the same way that once upon a time, any given dairy bar in the southeast might have just been offhandedly referred to as “a Dairy Queen,” one of these places might just be called “a Vienna Beef,” as though it is the name of the restaurant.

So my daughter and I enjoyed dogs at Hot Dog Heaven and at Marietta’s Taste of Chicago. I had a Chicago-styled dog at each and could not tell you the difference between them. Well, I exaggerate; at the second stop, I had a Polish sausage dressed Chicago-style. The only things that marked the visits at all different were the staffers: effervescent and bubbly at Hot Dog Heaven and where-ya-been-my-old-friend from Taste of Chicago, where I had not stopped in at least three years, and maybe three times before, period, but the gentleman there remembered me. My daughter instantly got kicked back into shape and sense by the good lunches at both places, and hopefully, this nonsense about her not liking hot dogs won’t ever resurface. The idea! 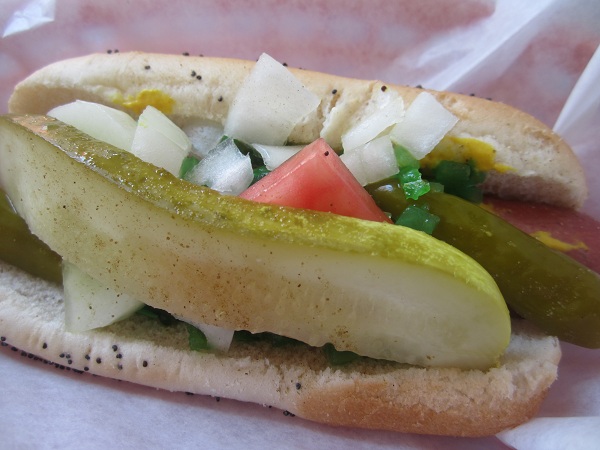 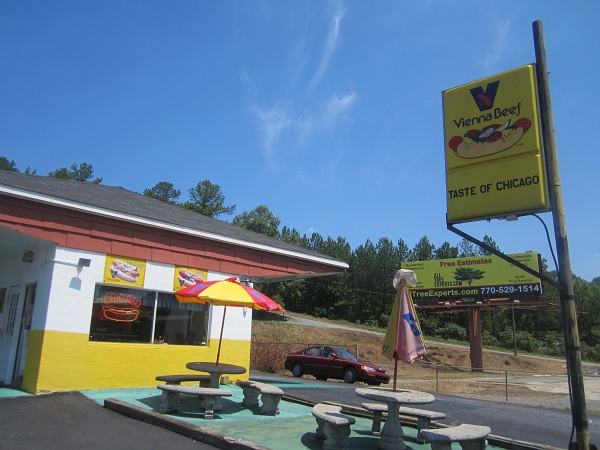 One very odd note about this little two-stop lunch is that both locations, weirdly, have been cursed with having one of those obnoxious title loan places open in the space right next door to them. You know the one with the white lettering on green? That one. The one on Powder Springs has taken up shop in what was originally a Dairy Queen, painting the DQ red into that livid, awful green.

Taste of Chicago itself opened in what had once been a Golden Gallon Milk Jug store, and, unsurprisingly, there is not very much space inside to eat. There are only three tables. Golden Gallon Milk Jug is mostly forgotten these days and information about them is not easy to come by. In the late 1950s, a building with multiple refrigerated coolers to store milk to take home was still something of a novelty. In short time, larger convenience stores would make space for the coolers that we don’t blink twice at, and Golden Gallon Milk Jugs found themselves uncomfortable relics of the past; most were gone by the mid-1970s. As ever, the Chattanoogan newspaper can be relied upon for background about these stores. Have a look at this 2004 feature. Frankly, I’m not sure how long this building can be expected to still be standing. The neighborhood has plummeted downhill in the last decade, and is a stone’s throw from some condemned apartments, plus, you know, it’s next to a title loan place. Not the nicest neighborhood anymore. I would not be surprised to hear that this whole stretch of Powder Springs Road is scheduled to be razed and rebuilt in the next decade.

Of all the Vienna Beef stores around our house – there are at least five – I think that I enjoy Chicago Delights on Roswell Road the most, because of the awesome display of Windy City sports memorabilia, but any of them will provide a fine lunch. It’s true that I’d rather go to Brandi’s than any of them, but it’s good to change things up every once in a while. Besides, Brandi’s doesn’t serve their dogs on these wonderful Rosen’s poppyseed buns. I never thought of that. Wouldn’t that taste great?