About a year ago, Marie and I visited a restaurant on Collier Road in Atlanta called Patrick’s Sub Shop. It is set up in a former Shrimp Boats building, one of an estimated 95 that were erected around the southeast in the 1960s and 1970s, before the chain, a small-player rival to the likes of Cedric’s and Captain D’s, folded. When I wrote that entry, I wondered whether we would run across any other repurposed Shrimp Boats buildings.

Two weeks ago, Marie and the baby and I had supper with our friend David. He was in the mood for chicken, and Urbanspoon offered this place on Sandtown Road in Marietta as a suggestion. I felt certain that we were in an old Shrimp Boats building, but it wasn’t until I could get home and compare the pictures that we took of Patrick’s a year ago – click the link above and see for yourself – before I was satisfied that we had found another.

Yes, we do have smartphones these days, and yes, I could have pulled up the old entry on my phone and looked at the picture right there, but these gadgets are still new to us and it did not occur to me. We adapt slowly to these things. 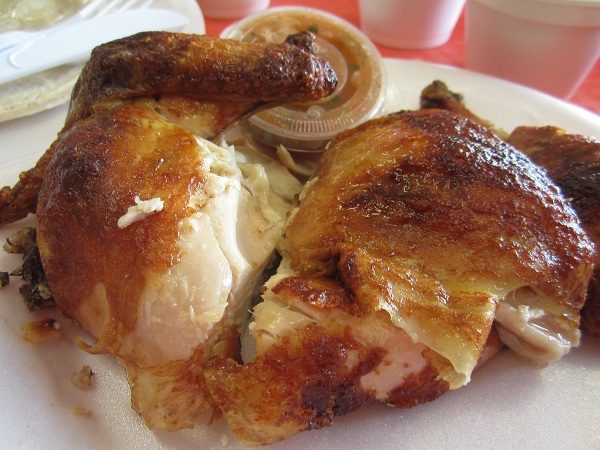 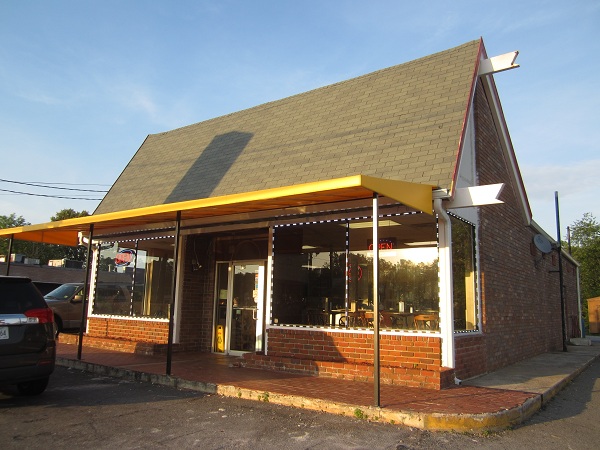 Unfortunately, Shrimp Boats is so old and forgotten that El Pollo Dorado’s owner, Jerry Luna, had not heard of it. He moved here from California in the late 1990s and opened this place in 2003. He recalled that it had been home to several places in the years before he opened. He knew that it had once been the home of a restaurant called Eddie’s Steaks, and, most recently before he moved it, a place simply called Super Burrito. And for readers – all three of you – who enjoy “not fooling anybody” repurposing of old and distinctive buildings, this whole beat-up neighborhood is full of them. There’s a former Pizza Hut now doing business as a package store across the street, and, around the corner on Powder Springs, there’s a former Dairy Queen now home to a title place, and a former Golden Gallon that’s home to Taste of Chicago.

Anyway, the food here is better than you’d expect from reading an entry in which I spend three paragraphs yammering about old buildings instead of the meal. Roasted chicken is the specialty here, and it is very tender and really juicy and not unlike the Sinaloaense chicken that we enjoyed on Buford Highway a few months ago.

I enjoyed a half-chicken which comes piled with sides – rice, beans, potato salad, and piping-hot tortillas served with a little cup of salsa – for just under seven bucks. A steal for this much good food. The baby chowed down on most of my sides and enjoyed them, particularly the potato salad. This was very good, but, as longtime readers might recall, I (mostly) gave up potato salad for “this has too many calorie” reasons when we began exploring more and more restaurants.

Marie was delayed at work and was only able to join us after we’d been there for a while. David had finished his massive tacos and I figured that, since I only ate about half my chicken and less than half my sides, I’d go order one of those myself. These are not like any others that I’ve seen anywhere around here, gigantic California-style tacos with lettuce, cheese, and tomatoes on soft shells, filled to overflowing with chicken. Two of those are meal enough for most people, and three would be pushing it even on a day of indulgence. I’m amazed and baffled why this place has not received any hobbyist curiosity for its decade in business. It’s very good food, in some cases very much unique, at a really reasonable price. We’d love to have some of our fellow bloggers stop by sometime and see what they think.