Asked what she would like to have for supper a couple of Saturdays back, Marie settled on cheesesteaks. Rather than going by our favorite place in the region – Roy’s – we decided to go hunting. It looked like there would be a good possibility at this new food truck park on Howell Mill and 75. Have you heard about this thing yet? Not having succumbed to the food truck hype, I remain skeptical. It sounds like the same thing as a mall food court to me.

So we dropped our daughter off to spend the weekend with a friend, and spent an hour or so playing with the baby at the children’s museum, and, shortly after five, arrived at the food truck park. There were three trucks, selling snacks and things. This was their opening Saturday, and lunchtime sales were so crazy that almost every truck had to close up and head home, leaving behind a stream of traffic coming in to see what all this food truck business was about. Well, you could stand around and buy frozen yogurt from one truck and cupcakes from another, and I forget what the other truck was selling, but it was not cheesesteaks.

Okay, so that is maybe a little unfair. I wish this enterprise great success, particularly in light of all the civic shenanigans that have followed over the last two weeks, with antiquated ordinances being enforced and police shutting down trucks. You can read about all this stupidity over at Creative Loafing or Eater Atlanta, and sadly nod your head, remembering that this is the same town that’s lost two NHL teams and somehow thinks we need to spend a billion bucks on a new stadium, but the number one police priority must surely be those blasted trucks, selling food at multiple locations!

That said, I’m also sure that we were not the only curious people to arrive and leave on opening day both baffled and disappointed. There was a pretty steady stream of people showing up and looking awfully confused as to why so much fuss was made in the media over three trucks. More trucks arrived after we left; in fact we passed the Yumbii truck, which was returning to the plaza from its home base at Hankook, on our way to our eventual dinner destination, and when we made it back to the interstate, we could see that there were at least six trucks parked and a good crowd. I don’t get it, but good luck to them, and we’ll try again sometime.

One reason that I don’t get it is that there’s no history with a truck. Part of what makes dining out so fun is the history of a place. I usually find that there is much more to say about places that have been around for years than the ones that are riding a new trend. Take Patrick’s, for example. Just the building alone says more to me than the content of anybody’s truck, and that’s despite the business having so little sense of its own history that the present employees were not able to confirm whether or not there actually was a Patrick when the shop opened almost forty years ago. But before this place was Patrick’s, it was one of nearly a hundred Shrimp Boats. 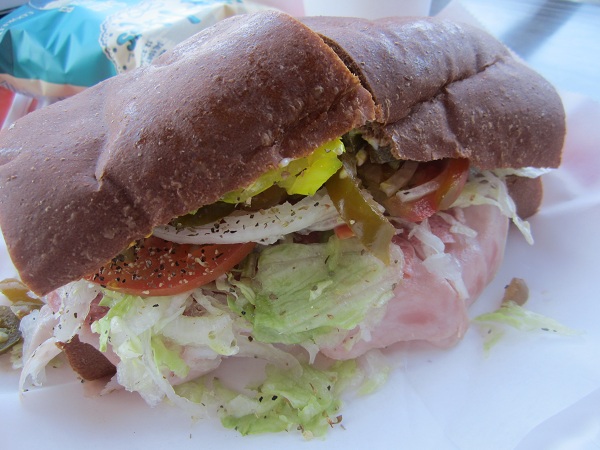 Fast food fish restaurants started up a few years after the hamburger chains reached critical mass and could be found coast-to-coast. In 1969, Captain D’s started up in Tennessee, and the first Long John Silver’s opened at the same time in Lexington. In 1970, Cedric’s Fish and Chips opened its first store in Columbia. Another chain called Moby Dick started in Louisville in 1975 and seems to have opened as many as thirty stores; perhaps seventeen are still open today. It was into this crowded concept that Shrimp Boats opened, with distinctive, high-ceilinged orange buildings, and wooden “pier” poles in the concrete out front.

Unfortunately, virtually nothing is left of this chain, which, according to the Duke University student paper, reached 95 stores at its peak. I’m not even sure at this time where it began, but only a handful of stores, including Durham, Milledgeville and Rome, seem to still be open, and they are all independent now, the franchise long gone. There were, once upon a time, perhaps five or six around the Atlanta area. This one, on Collier and Defoors, was only open for about two years before it failed. Patrick’s Sub Shop opened in its space in 1973. A Korean family, the Kims, owns the business today. They had two employees working the night we came by, and they closed early because the rest of their evening crew did not show up, and they couldn’t run delivery subs and keep the store running.

So Marie had her cheesesteak, which she said was pretty good, and I had a completely loaded Italian sub, which was miles better than what you may buy at a Subway and yet not a patch on what we could have had at Baldino’s. This is not destination dining, but it is certainly a very reasonable place to grab lunch in the neighborhood.

My own interest in Shrimp Boats, beyond just the “it is neat, old and obscure” factor, comes from my time living in Athens. At my hungriest and poorest in the spring of 1990, the surviving Shrimp Boats in that city, which was located atop Baxter Hill across from the high-rise dorms, offered a tremendously good deal in The Red & Black‘s “Coupon Survival Kit,” something insane like a meal, fries and a drink for $2.49 on weekends. So almost every Sunday afternoon, I left my dorm – Reed – and trudged up that hill to get a big, cheap lunch. When I tell this story, I tell people “You know Long John Silver’s fish? It was like that.”

About four years later – you’re going to think that I’m lying – the owner sold the business to one of those Chinese food emporiums with the menu of half a million items, which does most of its business by delivery, and tastes exactly the same as every other Golden-This-Happy-That place in town. Eventually, the new owners changed the name and the sign to China Boat, but when I entered one day in, likely, 1994, it still had the Shrimp Boat signage, and I wondered whether this would end up being any better, or any different, than all of Athens’ other identikit Chinese takeaways. It was not. Except that they had a curious thing right on the bottom of the menu called Peking Fish. I’d never seen that before, so I ordered it.

Now, bearing in mind that this is exactly the same sort of crummy place with the same “Chinese Zodiac” placemats and the same sweet and sour chicken served in that Clifford-the-Big-Red-Dog red sauce, we can, with the benefit of hindsight, know that this isn’t going to end well. And what I got was not at all good, but I had it coming for seeing Peking Fish on the menu and expecting anything else. When the new owners took over the place, either they still had several dozen frozen fish fillets back in the freezer, or they hadn’t canceled their contract with Sysco (“I said the S Word !”) before they started getting their food deliveries from Golden-This-Happy-That Asian Restaurant Specialties, Inc., and they got lumbered with a case of the stuff and had to sell it. So what they served to unfortunate schmucks who ordered Peking Fish was the same cod fillet that you’d get at Long John’s or Captain D’s, just drowned – and I mean swimming and drowned – in soy sauce, with some chopped green onions on top. It was, of course, utterly disgusting.

China Boat went out of business after a run of eight or nine years. Patrick’s Sub Shop has been hanging on for nearly forty. I wonder how many other restaurants are hanging around today in one of those 95 Shrimp Boats buildings.

So, indulge my curiosity, good readers! Did you grow up with a Shrimp Boat in your community? Do you know where the chain started? Do any other examples of their old building survive, reworked by some other restaurant into something new? Leave us a comment!