I occasionally keep a lurking eye on the 285 Foodies Forum for news and opinions about Atlanta’s restaurants. One of their regulars is a friend who goes by the handle Barnum, and he reported on a new little place that had originally been in the works to serve house-made sausages. The family changed directions and went with burgers instead. Driving around in November shortly before they opened, Marie and I saw their little storefront on Defoors Ferry at Collier one Sunday.

They’re in a teeny space in a decaying strip mall. It’s a great little intersection, really. When you visit Ssam Burger with your co-workers for lunch one day, you can give a friendly wave to the garish orange building of Patrick’s Sub Shop, across the street, and say to your buddies, “That there’s an old Shrimp Boats building. I know this because I read Marie, Let’s Eat!.”

Since they opened in early December, Ssam Burger has been attracting a little buzz. Zagat had some hype about them within weeks, prompting one of Spatialdrift‘s associates to recommend it for a visit. I stopped by a week after Emily, Anish, and their crew did, and enjoyed a very, very good burger. (In fact, I *think* it was my tweet on the 10th about enjoying my lunch that reminded Emily that she wanted to get a post about it up!) 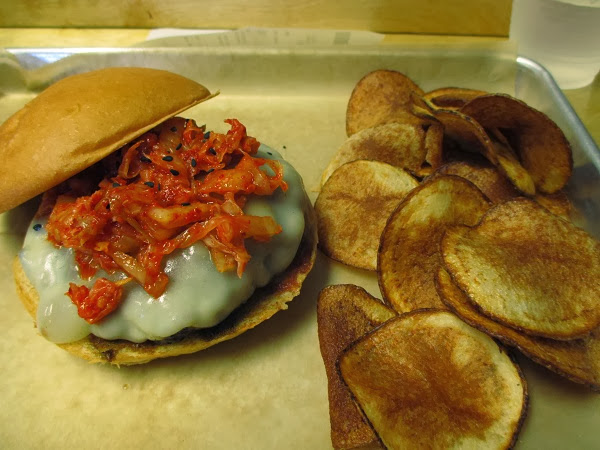 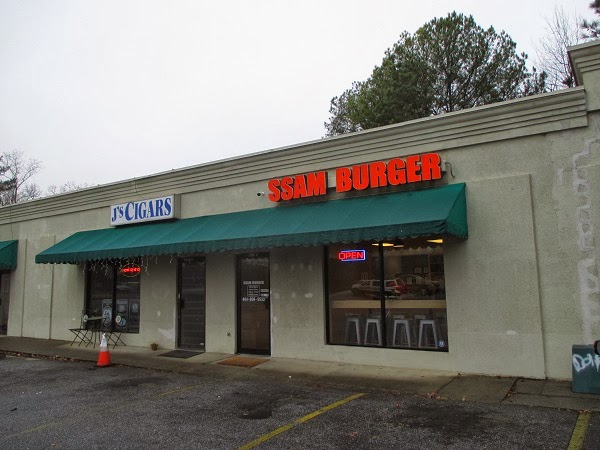 I like the way that Ssam Burger has a slightly similar feel to Hankook Taqueria down the road. Both places are playing with Korean fusion meals – there, with tacos and nachos, and here, with hamburgers. I ordered a Kimcheese burger. It’s an angus patty with a special sauce made from miso stock. Atop that, there’s a slice of provolone cheese and some kimchi relish. It’s $7.50 and comes with a side. I picked the house-cut chips and was very, very pleased with them. (I’ll never understand, however, why any retail place picks a price that rings up just over a whole dollar when you add tax. $7.50 becomes $8.03 in Atlanta. Price it at $7.47 and it’s an even eight, you know?)

Honestly, the burger is simplicity itself, but it is incredibly tasty. I like it when a small, family-owned place opens and starts getting honest and legitimate buzz from people who really enjoy the flavors, instead of the utterly unwarranted pre-release hype and noise of a crash-and-burn catastrophe like Yum Bunz. This was a very pleasant surprise and a really good lunch. Drinks include canned sodas and bubble teas – neither sweet tea nor a liquor license here – and while the spartan interior and counter seating looks a little grim and unfinished, I guarantee you that you’ve had far, far worse burgers than the Kimcheese, and probably paid a lot more for ’em, too. Definitely give these guys a try.