This is Marie, contributing an article about another location of a place we’d been to and enjoyed, and we wanted to see what (and how) the original was doing. Booming business, it appeared; the place was completely packed and there were ridiculous lines for the food bar. But I get ahead of myself.

The Real Chow Baby has three locations, at Howell Mill, Mall of Georgia, and Ponce De Leon avenue. We visited the Howell Mill location. There used to be another, at Cumberland Mall, that has spun off under independent management and turned itself into Big Chow Grill. That location has more upscale fittings and two service lines. The fittings are irrelevant, but having two lines would have been a great help!

We went with four of us, but since there was no way on Earth that even our vacuum cleaner of a toddler could finish a full serving, they graciously allowed me to share with him (a privilege otherwise forbidden for obvious reasons). There don’t seem to be many options for child portions on their menu, though I could possibly have overlooked something. Choosing food suitable to both my palate and the toddler’s somewhat limited my options to the less spicy end of the spectrum, but I don’t mind. Besides, I was keen to try the peanut sauces that I hadn’t tried before (I probably just hadn’t noticed – they have an astonishing number of options). My first bowl had two kinds of noodles with various veggies including peas, red pepper, zucchini, etc., fish and pork and an egg, and a mix of the peanut pesto and regular peanut sauce. That was pretty good, but I enjoyed my second bowl with the same veggies, but substituting coconut curry for the peanut pesto made the second bowl even better; the first two sauces are a bit thick and the second combination made a better coating for the other ingredients. 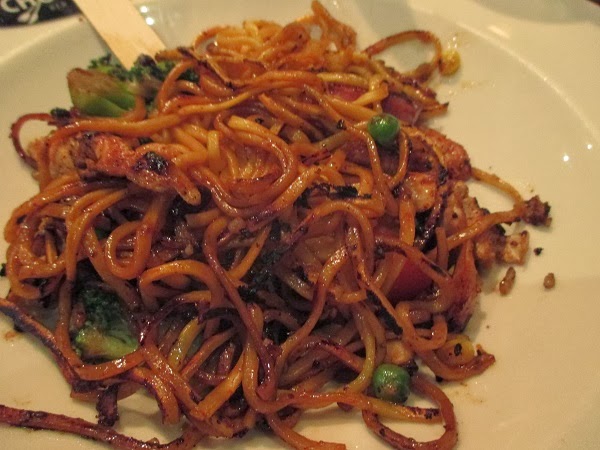 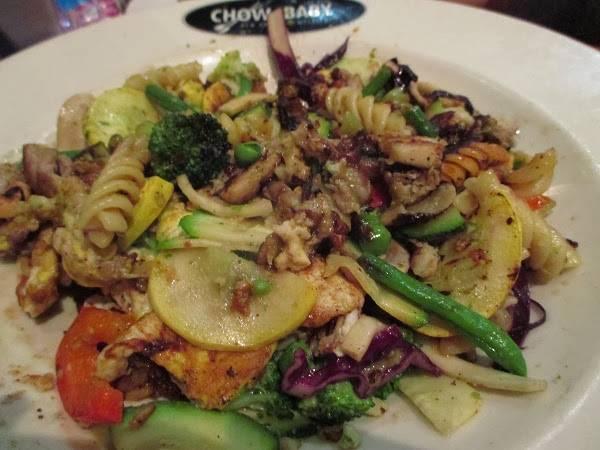 The toddler’s spice tolerance is very slowly going up, and curries seem to go down easier than most for him as they are less likely to make his mouth “sad.” He also enjoyed the second bowl better because the thinner sauce meant fewer toasty fry marks on the noodles. He objected to those for reasons universal to toddlers. I also put sesame seeds on both bowls. The girlchild had noodles with corn, cheese, broccoli, tomatoes, peas, sausage, chicken, teriyaki sauce, and cajun seasoning; she tried the same mix with sweet and sour for her second bowl and seemed to like that one better.

There are a wide variety of options available, and it can get overwhelming. If you want, there are little menu cards that make suggestions for how to make particular dishes that go well together. Do note that you may have a missing ingredient or two if they have something that rotates out, or if there is a bin of green onions instead of Chinese celery. But considering you can try and try again, I do recommend forging your own way, at least once you’ve gotten comfortable with the options available.

Every table there was full, with a wide mix of customers. There were some trendy twentysomethings, a pair of older ladies exchanging gifts, a couple of other families with toddlers, and many others; about the only thing I didn’t see was someone in a formal suit and tie. And he might have even been there as I could easily have missed him in the crowds! As I mentioned, the lines were very long due to the crush of customers. At one point I was behind a young couple who were arguing in fun about whether the male half’s sunglasses were for old people or not; they called on my opinion and I passed, but said my stepdaughter was all about sunglasses and they could ask her. They then gave me a lovely compliment, as they expressed disbelief that I was old enough to have a stepdaughter. Well, thank you, and I wish I’d been more admiring of the disputed sunglasses! 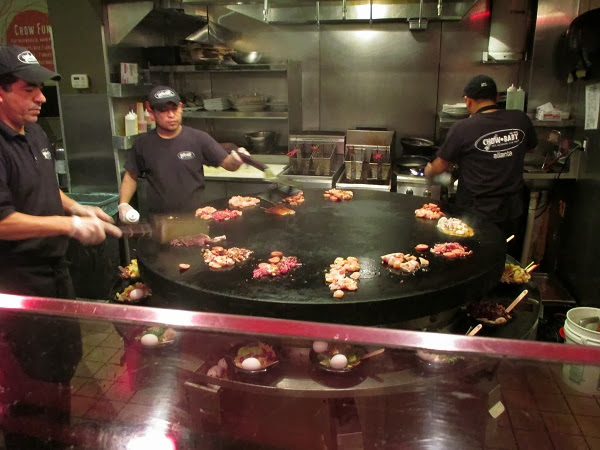 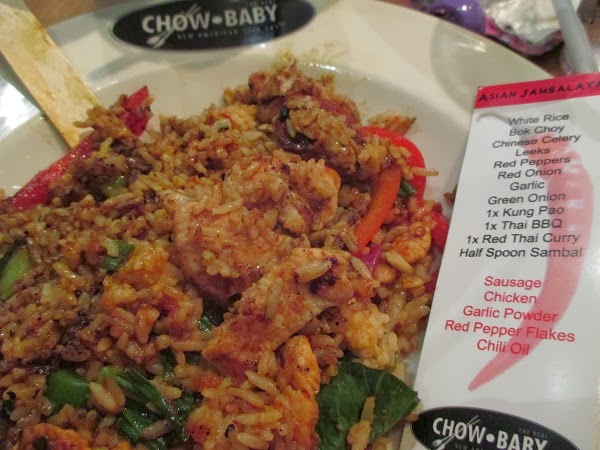 You will note a row of colored plastic sticks just before starting to load up your bowl; they include options to add shrimp, roti, etc. This is where they have options for allergies or vegan folk. If you are in either group there is a stick you add to your bowl and your meal is fried up in a separate container rather than on the communal fry table, so you don’t find up with any surprises. As you can see in the photo above, most of the bowls are fried up next to each other, so it is easy to get a stray bit of chicken or sprig of broccoli that escapes from your neighbor’s bowl; I got a shrimp once. Or, more ominously for the allergic, have your meal fried on the same spot that my extra-peanutty meal was cooked prior to yours. So if you are in that group, please remember to look out for the vegan/allergy option in the sticks.

I was pleased to see that the restaurant was doing so well as Real Chow Baby has an excellent product. It’s very pleasing to be able to customize your plate without inconveniencing a waiter. Grant has made enough fun of me over the years for substitutions (though I have NEVER been as bad as Sally in When Harry Met Sally) and here it’s not an issue at all. You can also order off the menu, but as we really enjoy the make-yourself bowls, we’ve never had the urge to try those out. If you have, please let us know what you thought of the options!