I had planned to put together another beer post last month, but I had a tough time deciding what to try. Around Christmas, I asked my brother for his input. I was looking for another brewery from the southeast where I could easily sample three or four beers. He suggested Back Forty, since the great people at Ale Yeah! in Roswell usually have at least three of their eight beers in stock.

I was charmed by Back Forty’s moxie in even getting together in the first place. Craft beer lovers in Georgia have some legitimate gripes about some antiquarian laws that definitely favor larger corporations, but we’re an anarchic paradise compared to our neighbors in Alabama. Until 2008, you couldn’t even produce a beer with an ABV higher than 6%, and there are still onerous and downright stupid laws restricting what businesses may legally invest in breweries. They require a lot of capital when they’re trying to get off the ground, you know.

In 2009-2010, Jason Wilson leased space from a brewery in Mississippi to get his company’s first two beers going. (This doesn’t seem to be uncommon in the craft beer world; Georgia’s Wild Heaven, for example, has been made in Greenville, South Carolina, for a few years and is only now beginning the move to production in their Avondale Estates facility.) His company’s first two beers, available principally in the Birmingham area, were Naked Pig Pale Ale and Truck Stop Honey Brown Ale. Naked Pig was one of three that I sampled. Back Forty moved into their own facility in Gadsden two years ago and have been steadily increasing production as their beers are finding new shelf space throughout the southeast. 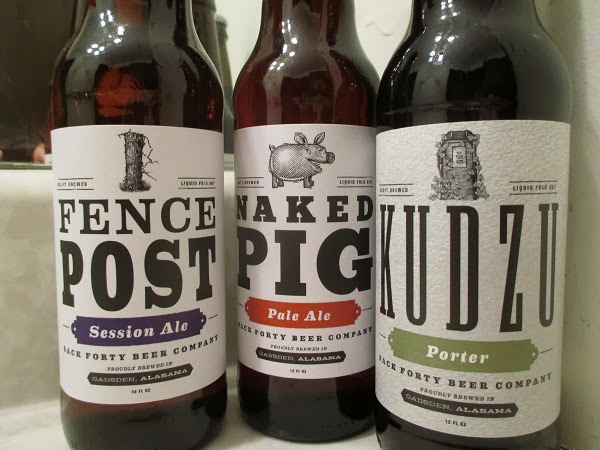 Here’s what I brought home and what I thought.

Fence Post Session Ale: I’d never heard of a session ale before. The site Beer Advocate describes it as a Kölsch-style beer. Kölsch, for many decades, had been a very specific and tightly-regulated specialty of the German city of Köln (Cologne) and has only been cloned and reformulated by American microbreweries in the last few years. Basically, this ale is said to have a slightly hoppier and less bitter taste than the better-known German pale lagers, but the ale is nevertheless so much lighter than most of its cousins. I honestly wasn’t a fan.

Kudzu Porter: On the other hand, this is terrific. It’s red-brown, and does not have as full a body as, say, Bell’s amazing porter, but I could absolutely drink a gallon of this. Very smooth, with mild smokiness. This has been one of the most pleasant surprises of this experiment in finding new beers, and I’m ready to pick up a couple of six-packs on another trip to Ale Yeah!.

Naked Pig Pale Ale: Another solid winner. One of the best American Pale Ales that I’ve tried, this is light and flawlessly balanced. I taste the citrus, the hops, and a caramel malt taste in perfect rhythm, and was smiling happily throughout. The taste ends with a perfect little bitter bite from the hops.

What seems clear from my first impression is that while the session ale was not to my taste, Back Forty is working with some very tight recipes and quality control. Okay, so I’m sure that’s ideally true of every small craft brewery, but something about the complexity of their recipes and the excellent balance of each drink impressed the daylights out of me. I’m interested in trying more of their beers, and soon. They seem to have five more flavors out there, and I hope to see them on shelves.

Hey, readers! I promised you five chapters about beer as I learned a little more about craft brewing, and this makes five. Would you like to see more? Is there a southeastern brewery that you would like me to sample? Please drop me a line and give me your thoughts!