Greenwood’s is one of those restaurants that opened in the wrong time and place for today’s hobbyists. Between fifteen and twenty years ahead of the trend for new Southern cooking, Bill Greenwood moved down from Maryland and came up with an oddball recipe for fried chicken that he was certain would turn people toward the less time-intensive comfort foods on his menu. It didn’t work, because people love it. The chicken takes between twenty and thirty minutes to prep, and is fried in a peppery bath of honey and lemon. The crust is unlike any I’ve ever tasted, and is certainly one of the most interesting and tasty in the Atlanta area.

Marie and the baby and I went up to Roswell one Saturday last month. We had initially planned to let the toddler play a little further north at the gigantic play fort at Wills Park before having lunch in Alpharetta, but it was too cold, so we postponed that. Nevertheless, I did have to go to Roswell at some point, because the good people at Ale Yeah! had, happily, sourced some Bell’s Cherry Stout for me, and so we selected this place to get some lunch. 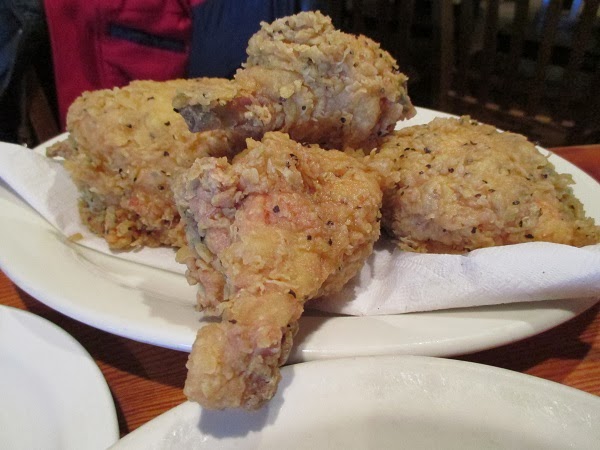 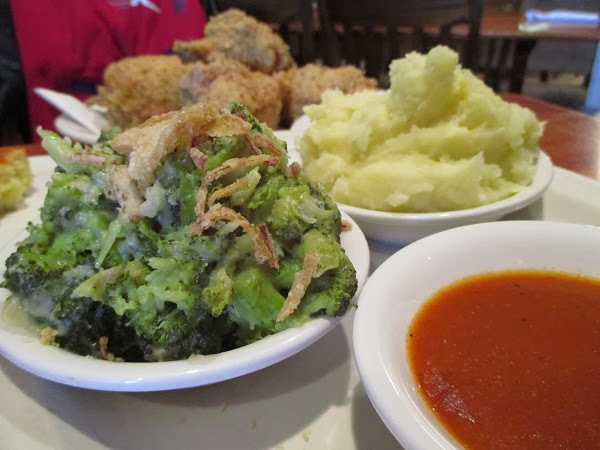 It is a very oddball property. The building incorporates part of a very old log cabin, with some of the timber dating back to the 1810s. It’s surrounded by folksy yard art and peace symbols in a lawn that hasn’t been mowed properly in years. I love the place. I’d like to move in.

The portions at Greenwood’s are completely gigantic. We ordered the fried chicken, which came with two sides, and a four-veggie plate. Not only did this satisfactorily feed the three of us, we took lunch home to the girlchild, who agreed that the chicken was fantastic. 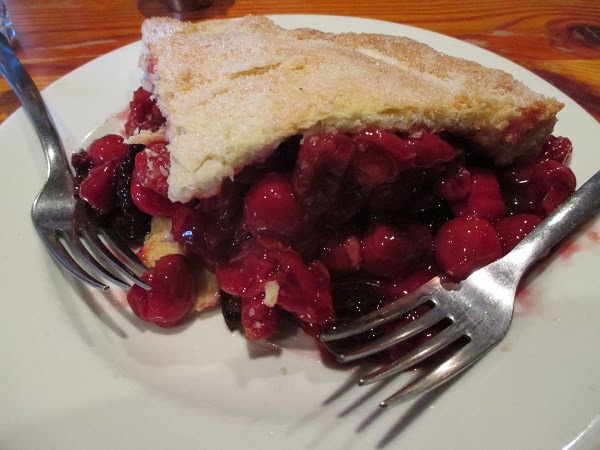 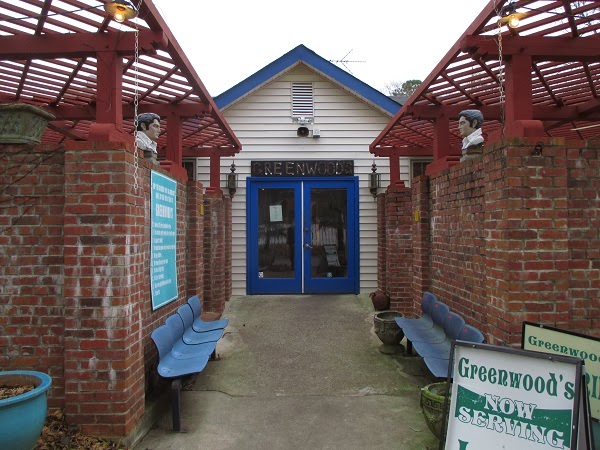 We started out, however, with dessert. Since the fried chicken has a longer-than-usual prep time, and since asking a toddler to remain happy and quiet in a highchair for half an hour is a pretty unreasonable idea, we figured to share a slice of cherry pie. They sent out a gigantic quarter of the very tasty pie, and we happily munched on that, and some corn muffins, while we waited.

The veggies were all very good. Greenwood also operates the barbecue-and-live-country joint Swallow at the Hollow*, across the street, and while I am no fan of that barbecue, I have been complimentary about their sides. The fried green tomatoes, creamed corn, cheese grits, carrots, and broccoli casserole were all of very high quality. The mashed potatoes came with a really tasty and unusually hearty brown gravy.

It seems that most of our town’s hobbyists have not really given Greenwood’s a try. Having experienced this place, I think that Greenwood is a spiritual ancestor of Ford Fry and Hugh Acheson, and a very early proponent of locally-sourced, farm-to-table cooking. His plum rotisserie duck is often praised by diners and sounds like it would be worth a taste on another visit. Just remember to order sensible portions – your bill will be a little higher than most suburban nights out, but you’ll be taking home some really, really good food as well.

Other blog posts about Greenwood’s:

*I learned an interesting thing on this trip. On the inside front wall of Greenwood’s, a story from a 1992 Hudspeth Report described the property across the street, now home to Swallow at the Hollow, as The Georgia Pig. I dropped Cathy Miller at Hudspeth Report a line, and she confirmed that Ed Powers, who owned the venerable restaurant in Brunswick (it lasted from 1973-2012), did indeed open a second location in Roswell.

Chris Hassiotis from Zagat wrote us to add that after a few years of doing business, Powers ran afoul of a local ordinance about preparing meat. He had been smoking using an open pit outside, which either Roswell or Fulton County decided to regulate. (I recall that Smokin’ Joe’s in Demopolis AL had the same issue once.) After closing for a few months to rebuild in compliance, they reopened, but the opinion of the community was that it was not the same, and the restaurant stumbled and closed for good around 1995.