In the early morning hours of November 27, there was a small fire at the justifiably legendary Scott’s BBQ in Hemingway, South Carolina. Nobody was hurt and most of the property was undamaged, but even a small fire can be a very costly nightmare in the restaurant business.

Rodney Scott has a lot of friends and supporters in the business, and a lot of starry-eyed food tourists who’ve made the long trek into the Lowcountry to see what all the fuss is about and come back just this side of speechless. I was there in October 2012 and it was darn near a religious experience. With several weeks of repairs to complete and lots of funds to raise, Rodney has taken to the road to share his excellent recipes and whole hog style with people across the South.

The Fatback Collective, a group of “chefs, restaurateurs, thinkers, writers, and entrepreneurs who gather often to invest energy and intellect to forge stronger communities,” put on the Rodney in Exile Tour, which concluded on Monday. Jim ‘N Nick’s Bar-B-Q donated supplies like plates and sides, and area businesses donated space for little pop-up restaurants serving Scott’s barbecue, usually both in low-priced sampler lunches and in higher-ticket dinners to raise money to rebuild his shed and pits. The tour dates:

You’d better believe I was at Gunshow for the opening day of this tour. 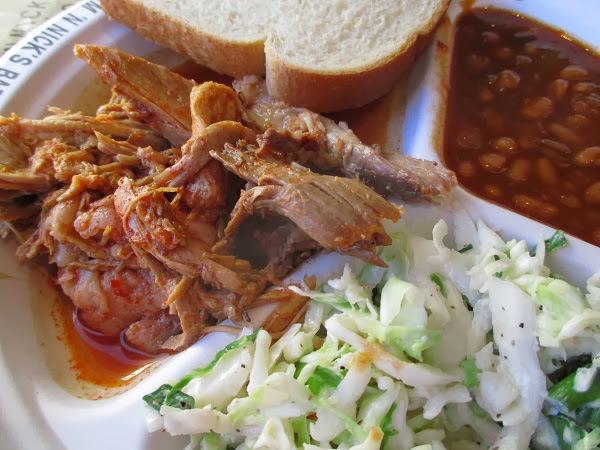 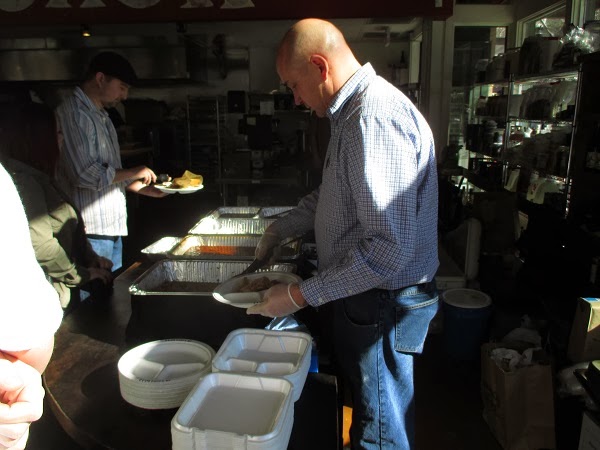 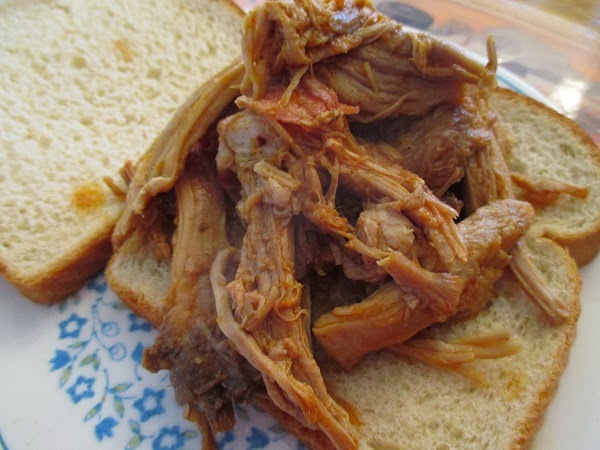 The lunch menu at Gunshow included $10 plate lunches and $5 sandwiches. I enjoyed one plate about two in the afternoon, and then bought four sandwiches to take home. This made up a little for me going off on one of my circumnavigations and telling Marie about this unbelievable food I found in Mobile / Muscle Shoals / Hemingway. (Why is it that on all three of these jaunts, the very best barbecue I found was halfway through the tour, at the furthest point from Atlanta?) I honestly don’t know that I’d agree with my memories about the sauce, which, in my dreams, was blacker, more peppery, and blissfully painful than the equally wonderful thin, red, spicy brew spooned over this succulent, light brown meat. Oh, I’m having hunger cramps just remembering how good it was.

Anyway, Marie and I enjoyed sandwiches at home and she nodded in satisfaction, impressed that, for once, my hype was pretty darn justified. I took the rest of the meat to work with me the next day, and even after all that time in the fridge and a zap in the microwave, that was still one mighty fine lunch. I made sure to have a Pepsi with it, just as it’s served in Hemingway.

My sincere thanks to Kevin Gillespie at Gunshow and all the Fatback Collective team for putting on this event. I hope y’all raised boatloads of money to get all of the property rebuilt. Barbecue lovers, if y’all have any business in Florence, or Myrtle Beach, or anywhere past your own driveways, you need to detour to Scott’s. This tour left a lot of very impressed, happy eaters nodding slowly in amazed agreement.

Other blog posts about the Rodney in Exile tour:

(I would love to share more… that’s why I held off on posting this until the tour was finished! If you attended an event and wrote about it, please let me know.)