Since the last time that I wrote about Tin Drum, back in August of 2012, the small chain has expanded a little more. There are now thirteen stores in Georgia, although their Birmingham store shuttered last year. The most recent addition to their chain is near Town Center Mall, in the same strip mall that is home to Twisted Kitchen and a Cheeseburger Bobby’s.

Proving that the best way to get us to sample your restaurant is to open up shop within five miles of us, Marie and the toddler and I went here for lunch one Sunday in December. They’d been open about three weeks, and, with that timeframe in mind, we found the experience a little frustrating as the staff took an incredibly long time getting the kitchen up and running. We placed our order right when they opened at noon and got our food more than twenty minutes later. 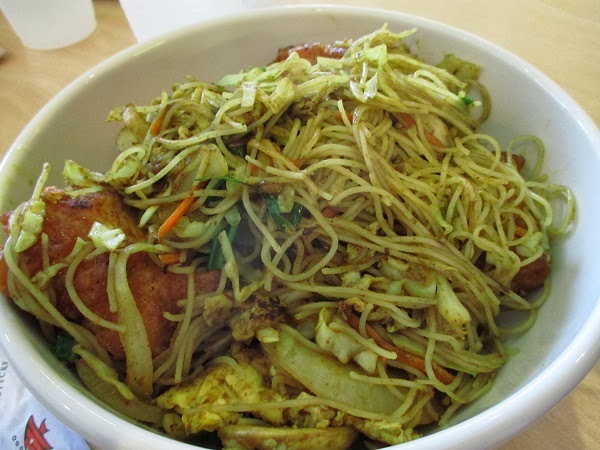 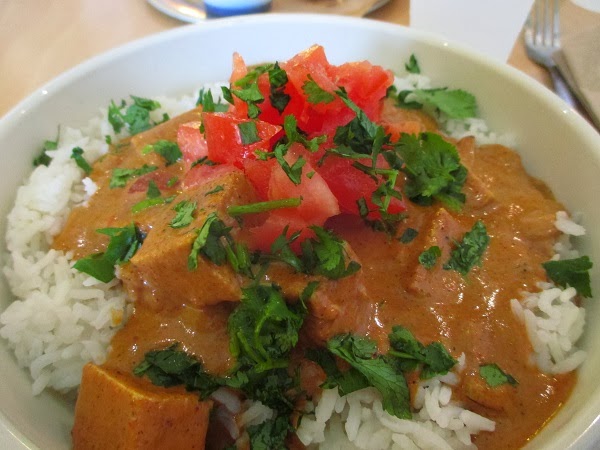 Actually. just deciding what to order was confusing and frustrating. I recall that the menu at the downtown Tin Drum was also a little cluttered and busy, but the one that we were given was a complete mess. The seventeen entrees are divided into three completely arbitrary headings. Pad Thai Noodle is not a Street Noodle, but an Asian Classic, as is Teriyaki Stir-Fry, and yet Mango Stir-Fry is a House Dish. Making a division of rice vs. noodle, or even the original nation of inspiration, would make more sense than this.

Also disagreeable: a hidden dollar-plus upcharge for switching from meat to tofu, despite the menu listing that vegetarian options are available for certain dishes. This whole thing badly needs to be reworked.

At least the food was good. Marie ordered the Sing Chow Men Noodles (which are not actually part of the culture of Singapore) and I had Tikka Marsala with tofu. They were both very good, cooked right and spiced right. I’d have liked a few more vegetables in my dish, though. Some chopped carrots would have been downright lovely. 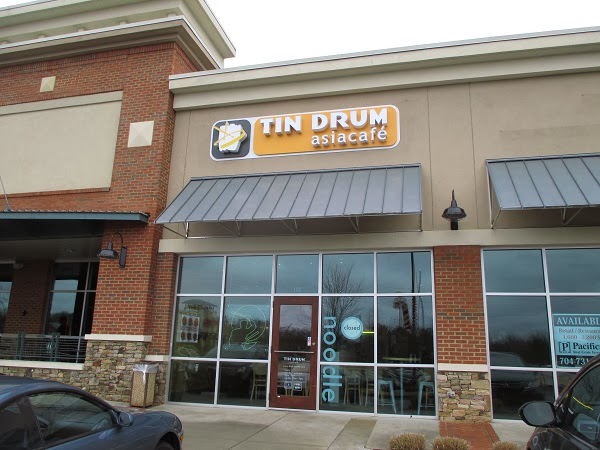 Well, the food is good despite the menu being a mess, but I was also, selfishly, disappointed in the design of the place. The great big wall-sized portrait of David Sylvian from the cover of the 1981 album Tin Drum is missing, and the interior instead looks like a temporary pop-up restaurant, with no ceiling and unfinished wood. It is deeply ugly, and reminds me of when I was a teenager and would have a break-time sandwich in the service corridor behind the mall store where I worked, sitting down on a rickety old chair on a hard concrete floor.

Perhaps it is meant to evoke something simple for street food, but I felt that the fun character of the downtown store was long gone. Then, as we ate and listened to the quite pleasant mix of music, “Money for All,” a song from one of Sylvian’s many bands, Nine Horses, came up. Okay, so at least they haven’t strayed too far from the original inspiration. If there’s a next time, though, I’ll take my food home. Home’s less grim.