Over Labor Day weekend, we sampled a couple of new-to-us restaurants, but we did so under the chaos of festivals and conventions, when nobody is at their best. With that in mind, I thought I’d break up the routine by running down all the dining out that we did over the weekend, both new places and old favorites.

For lunch on the Friday, my boss and two of the directors invited me along as they walked up the hill to the Peachtree Center Food Court so that we could people-watch as Dragon Con got started, bringing 60,000 hungry people to town. We went to the window with the shortest line, and that was for an Indian place called Turmeric, where you can get one meat, one vegetable, rice, and some pita bread that pretends to be naan for $6.50. I chose the Chicken 65 and some potato curry. Some people may debate whether Zyka or The Mughals has the best Chicken 65 in the city. Turmeric will never be included in such a debate, as evidently their recipe simply calls for undercooked, tasteless chicken pieces to be rolled around in some red food coloring. Even understanding that festivals tax the resources of restaurants as the madness of the crowds spirals out of control, this one had only been open for business for one hour when we arrived.

My daughter and I had a far better time in the evening, when we picked up our Nashville friends Tory and Holly from their Dragon Con hotel and drove to Buford Highway. They had never experienced the fun of this corridor before, and I thought that we’d try a new-to-me restaurant, Mariscos La Riviera Nayarit, which has been on my to-do list a little while. Stepping inside, our friends were less keen on the idea, as the odor of seafood was overpowering. So we left and popped to the strip mall that is next door. El Señor Taco is a place that I enjoy a great deal and which I’ve visited three or four times. Holly was fairly pleased, but Tory, while diplomatic and courteous, was really not. It really didn’t compare to one of her favorite places in Nashville, Mas Tacos Por Favor. I was very happy, though. The chicken tacos here are outstanding and I love all the great salsas.

We had much better luck when we went to Sweet Hut for dessert. My daughter had some pastries and our friends enjoyed their drinks a whole lot. The experience was a huge treat, since our friends are not aware of any similar Asian-owned bakeries or drinks places like this in Nashville. Pointing out all of the similar bakeries, like Milano and Mozart, on our way north to the perimeter just had them drooling for more chances to eat on Buford Highway. Well, y’all should come back and see us more often!

Marie and our son stayed home while we played because he had been running a fever and had a frog in his throat. On Saturday afternoon, I stayed home with him while Marie and the girlchild went out for lunch down the road at The Vineyard Cafe in downtown Marietta. They enjoyed quiches and cakes and teas.

Many hours later, after some napping and some football, my daughter and I went out to collect some sandwiches from Firehouse Subs to eat while we watched the Georgia-Clemson game. Oddly, we live almost exactly between two stores in this still-growing behemoth of a chain, but the one in Kennesaw never has my favorite hot sauce, Gator Hammock, so we started going to the other one.

Actually, I should point out that we would only ever go to the nearby Baldinos when we want sandwiches, if only they were consistently open for supper or on Sundays. This is the only business that we’ve ever frequented that literally requires a telephone call every single time we want to go. And this isn’t “oh, they closed early today for some stupid reason,” it’s that they have changed their printed hours – on the door – something like fifteen times in the last decade.

Anyway, Firehouse is not as good as Baldinos, but they’re reliable and tasty and they seem to keep employing boys so adorable that my daughter gets tongue-tied and starts blaming “anxiety” for her inability to forge a coherent order. Plus they (and they alone) have that awesome Cherry Lime-Aid in the Freestyle machine, which is the very best beverage in any Freestyle machine. I got a big ole cup of that and my usual turkey and ham sandwich, and then had the frustration of them not having any Gator Hammock sauce. I should probably just buy a bottle of it myself and quit giving the stores grief, I suppose.

This Firehouse location is set up in the former home of a locally-owned sandwich shop called Smothers. This place had been in business for something like a quarter-century before closing. The last two years saw three fairly old sandwich shops in this stretch of Marietta, between the square and the other side of the hospital, all shut down: Tommy’s, Smothers, and Qubie’s had probably all been in business for a collective seventy-five years. Strange that they all went down like dominoes. 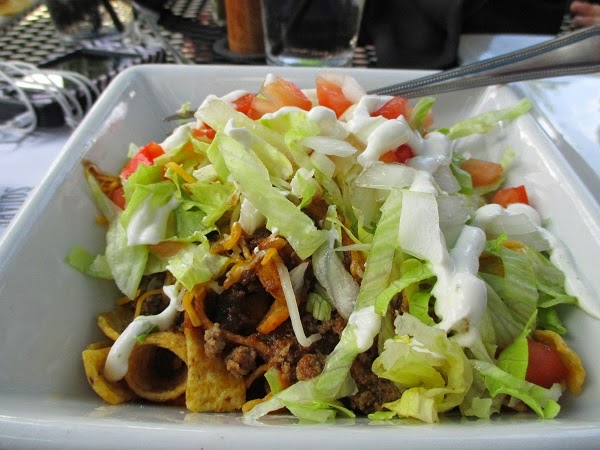 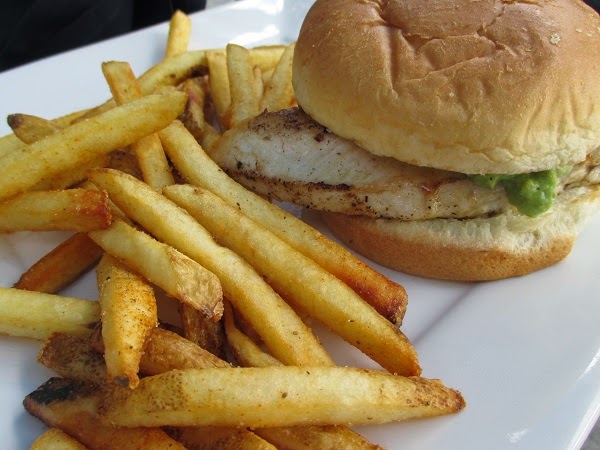 Our son was feeling better on Saturday night and slept just fine, so we took him with us to the Decatur Book Festival on Sunday, where I had to do some PR work for my real-world job. Yeah, on this weekend, Atlanta was host to two football games, one baseball game, several NASCAR races, Dragon Con, the Decatur Book Festival, and Black Pride Weekend. If you were looking for something to do in Atlanta, you weren’t paying attention.

Marie selected The Square Pub for lunch, and it was also suffering from festival overload, but we had a really terrific server, and we made sure to tip her well, even though the entrees that she brought were incredibly uninspired. The kitchen was badly backed up, but I don’t know that should excuse this Frito pie, which should be made with chili, and not loose ground beef with what tasted like thin taco sauce. The chicken sandwich was likewise disappointing and dry, but the awesome hand-cut fries, salsa, and cheese dip that we enjoyed suggest that when the kitchen is on point, this could be a very good lunch choice. 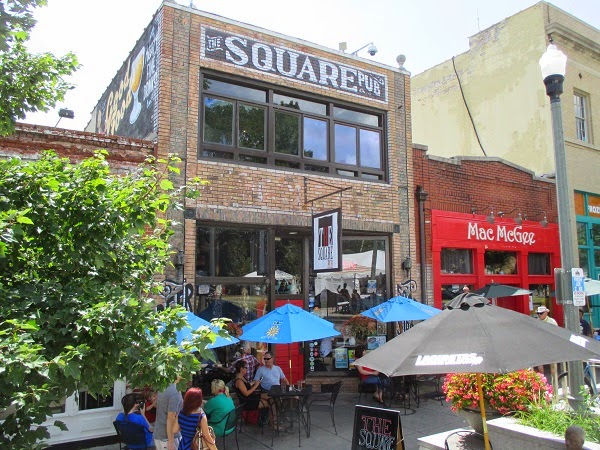 The Decatur Book Festival was fun, but also very, very exhausting. It did not help that it was mercilessly hot and humid, that the noise of the snare drum that signaled the start of the children’s parade scared the bejesus out of our son and kept him crying for twenty minutes, and that, on the clock and working a booth at the event, I was dressed to sweat, but, even worse than that, on our way to Decatur on the train, I sat down in a puddle of water on one of the seats. (We’re pretty sure that it was water, anyway.)

So we were pretty worn out by the time we got home. My daughter fell into one of those comas that only teenagers can experience, and slept for literally fourteen hours. She missed out on supper; Marie almost always cooks on Sunday night and we almost always have a meal together, but she just drove over to the nearby Tin Drum Asiacafe to get carry-out since she was too beat to cook. We were glad to give this location another chance after its start-up stumbles earlier in the year. The Penang Curry is terrific and they really do give you a decent amount of great food for your money.

That was our Labor Day weekend; we hope yours was pretty good, too! It’s unfortunate that the meals that we enjoyed the least were the ones that may have been impacted by festivals, but that’s how things go, I suppose.

One thought on “The Unfair, Fickle Finger of Festival Weekend”