This is Marie, contributing an article about tea. Specifically, about a cute little restaurant which serves tea along with desserts, soups, salads, and an awful lot of little girls. Technically the little girls aren’t on the menu; it’s just that this appears to be a popular spot to bring kids for tea parties.

The restaurant is above a gift shop which is open every day of the week. That was disconcerting, because the first time I stopped by, I had consulted the gift shop hours and was disappointed to find that the restaurant portion of the business is not open on Sundays. As a result, this place lingered in my memory and the next time our paths took us through the Marietta square, I decided it was time to go. My husband is not as fond of tea as I am. He can be impressed by sweet tea with ice in, but hot tea is just not his thing. However, we were going to be having pizza later in the day (which is currently off-limits for me) and therefore he was willing to be extremely patient while I enjoyed myself.

I don’t remember a time when I haven’t liked tea, though I do vaguely recall adding milk and sugar because it tasted too strong. Now, this was not in the context of a tea party like the little girls at The Vineyard, at least one of whom had a tiara and feather boa. It had to have been at my grandparents’ place in the Netherlands based on the context, which means I was probably 8, and the tea was just what was available to drink. Well, there was also the fact that my grandmother would not give me cookies every time I asked, but there was always a cookie with tea. Since caffeine and sugar are my two vices, it’s good to have a link to family history. And a reminder that I have apparently been motivated by food for a very, very long time. 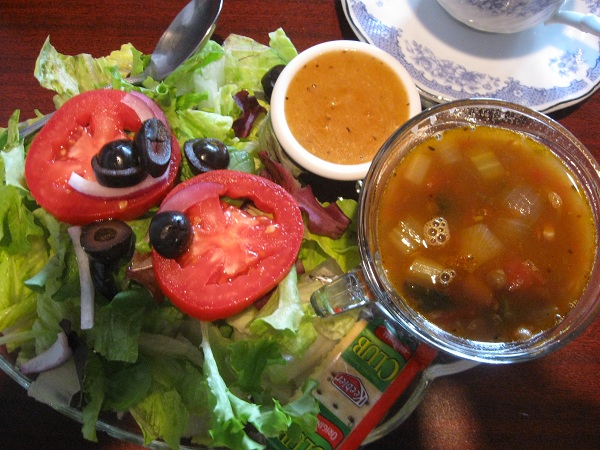 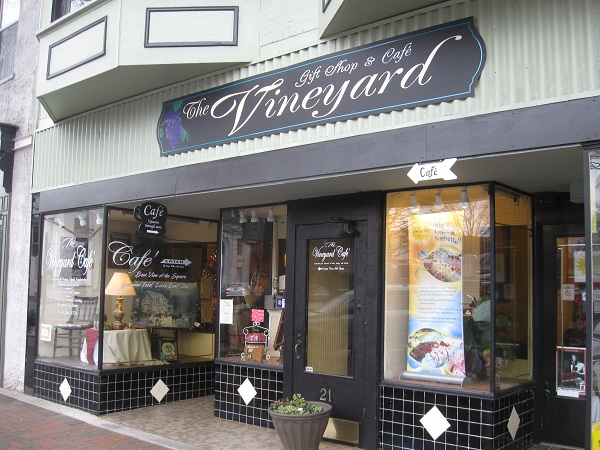 The cafe is upstairs in a little room looking over the square, which makes it something of a challenge to get into (not many restaurants are forced to have their customers pass by the kitchen in order to get into the dining room) but once there it’s very pleasant. We didn’t have a table next to the windows and were still able to have a great view. The server was very helpful. She made sure that all her customers knew how to use a French Press, and gave good advice to the couple across from us who were somewhat daunted by the tea choices and wound up both getting the same thing. She also was kind enough, having answered questions about which soups were non-dairy, to have the kitchen leave the cheese sprinkles off my salad without being asked.

The food options are mainly either light snacks like the tiny but very tasty bowls of soup, a certain prize-winning croissant sandwich, and desserts. I would definitely like to revisit this place when the dessert menu is back on my options list, as I could sit with a friend talking about books over many, many cups of tea and slices of cake or croissants. My soup and salad were excellent – I wonder where they got such good tomatoes in the winter, and the dressing was interesting too – but a slice of cheesecake would definitely have set off my tea more effectively. The Vineyard Café seems to have parties, bridal showers, and such as a significant portion of their business, but I would have to say that if I had time to be in a book club I’d vote for this as one of the main destinations.