One of the most interesting new restaurants in Atlanta that we have visited recently (not, as you have probably noticed, that we are all that well known for visiting the newest restaurants) has been The Pig and the Pearl, a curious mix of a raw bar and a smokehouse that Chef Todd Richards and his team have opened in Atlantic Station. If you want good barbecue in midtown, it’s here. If you want good oysters, they’re here as well. Marie and I were invited by the restaurant’s PR team to sample the menu, and Chef Todd put together a pretty stunning tasting menu for us.

Raw bars have been bubbling up as one of Atlanta’s newest trends, as sparked by the mold-breaking success of The Optimist, but I went in thinking that oysters and barbecue were something of an odd combination. We’d visited a place on Tybee Island that served up a combination of shrimp and barbecue in July, with mixed results, but emphasizing oysters with smoked meats was new to me. After the meal, and after Marie, her “baby alarm” blazing, had departed, Chef Todd took me on a tour of the kitchen and to see the smokers out back. The Pig and the Pearl employs a pair of Southern Pride uprights in a fenced-off area behind the building, and he uses a 70/30 mix of oak and pecan in them. I asked Chef Todd what sparked the idea and he explained that, growing up in Chicago, it was customary for his family to pick up dinner from a number of places to please and feed everybody. Barbecue and oysters came from separate restaurants in Chicago, but found a great place together at his family’s dining room table. 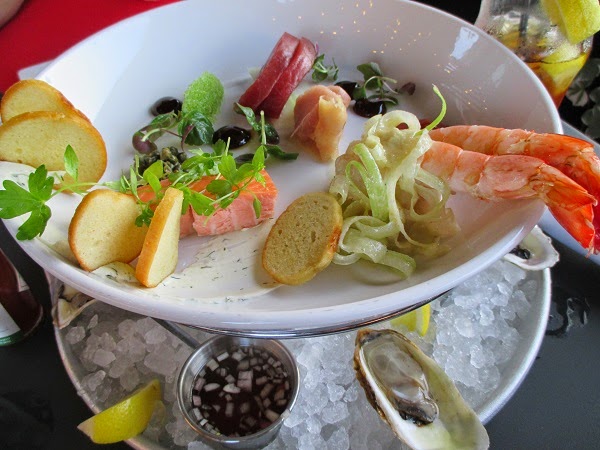 We sat outside since the weather was so mild and wonderful, and we started with a mini-tower of seafood, including four oysters, two shrimp, smoked salmon, and tuna sashimi. We effectively split the tower in half – Marie took the bottom because, criminally, I am actually allergic to oysters – while I enjoyed the top. I loved the little toasted bagel chips with cream cheese and capers, and the perfectly smoked salmon went so well with it. Marie was pleased with the oysters, which, Monday through Thursday, are available for just a dollar apiece during happy hour.

For the second course, we enjoyed a pair of really tasty appetizers. Wonderful smoked whole wings in a soy vinaigrette sauce were accompanied by pork belly, served with a bourbon apple sauce, skins, and some interesting fried Brussels sprouts. 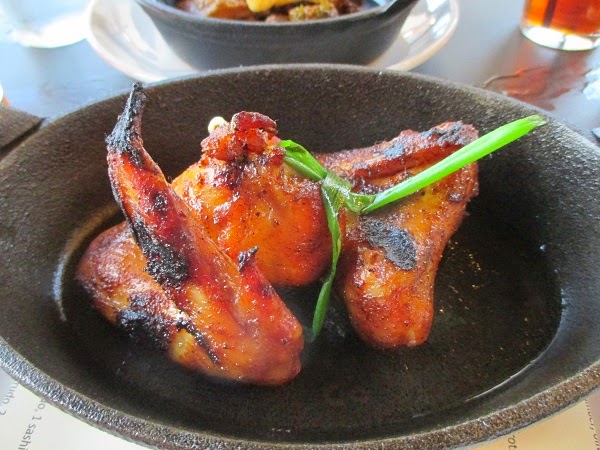 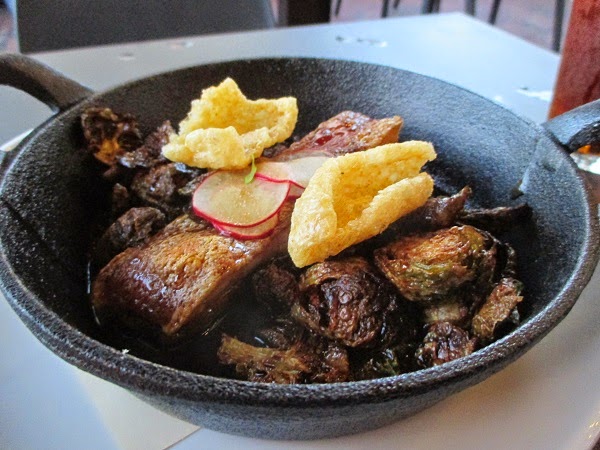 I’m afraid that we lost the light just before the third course arrived, and the resulting photos were unusable. Nevertheless, we enjoyed a sampler platter that included two spare ribs, which Marie contends are among the best that she’s ever had, some brisket, smoked trout, and home fries topped with smoked duck. These were joined by some pretty amazing mustard greens that are cooked with pulled pork and onions, and double cream mac-n-cheese made with cheddar and Tabasco sauce. Great heavens, this is good barbecue.

I was interested to learn that the preparation is similar to how they prepare the chopped pork at The Original Ridgewood Barbecue in Bluff City TN. After the meat has finished smoking – the brisket and the pork go on in the evenings and through the night, with ribs and other meats starting in the morning – it is not kept in a hot box, but rather goes into the cooler until it is ordered. Then, it is cooked on a wood-burning grill. I will agree that the ribs are quite good, but it’s the brisket that wowed me the most.

There are three sauces available: hot, hotter, and bourbon hot sauce. These are all deep red to brown and none of them are overwhelmingly spicy, but the brisket paired with the bourbon sauce is absolutely heavenly. 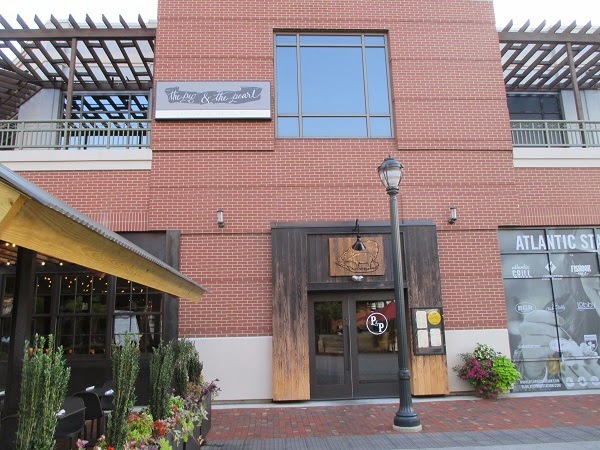 The prices are a little higher than most barbecue joints in town, reflecting the chef-driven nature of the menu and the very busy kitchen. Expect to pay about $20 for ten ounces of brisket with one side. So yes, it’s pretty far removed from simple weekend roadside ‘cue, but when the sides include things as interesting as the greens with smoked pork, and that fabulous mac-n-cheese, and some really interesting other things like carrots with edamame and burnt ends, creamed corn with serrano peppers, and smoked sweet potatoes with spicy pecans, it is quite different from the customary sides of stew / slaw / beans.

Summing up, this was a really fun visit to a downright neat restaurant. We enjoyed our food a lot and will definitely return. I’m keen to try that bourbon hot sauce with some pulled pork next time.

3 thoughts on “The Pig and the Pearl, Atlanta GA”