On our most recent trip to south Georgia, I wanted to make two stops in Savannah, and possibly see a little more of the city. We decided to have a lunch there both on the way down and on the way back, and so we timed an early departure from Atlanta in order to get to Gerald’s Pig and Shrimp on Tybee Island just as they opened. We made it on time and their kitchen wasn’t quite ready. We had about a half an hour’s delay. Fortunately, there’s a cheap tourist goods shop across the street, and plenty of space for the three year-old to get his wiggles out while we waited.

Gerald Schantz has been an entrepreneur in Savannah for decades. In the 1970s, after a long stint in the US Navy, he made stained glass in a shop downtown. Eventually, he decided to open a catering service called Gerald’s Chuckwagon, and, later on, a restaurant called Gerald’s Diner. Like a lot of people on the coast, he found himself craving the island life and he eventually moved to this remarkably odd location on Tybee. If you follow US-80 out this way – well, you’ll either follow US-80 or you’ll take a boat – then Gerald’s is the wall-free structure with all the landscaping on the left. (Not on the right, Google Maps!)

Fifteen years ago, there had been another barbecue place quite nearby, called Pavlov’s Pit. I remember that place because it was the first joint that I ever had a mustard sauce with my barbecue. I’ll remember Gerald’s, however, not for their barbecue, but for their shrimp. 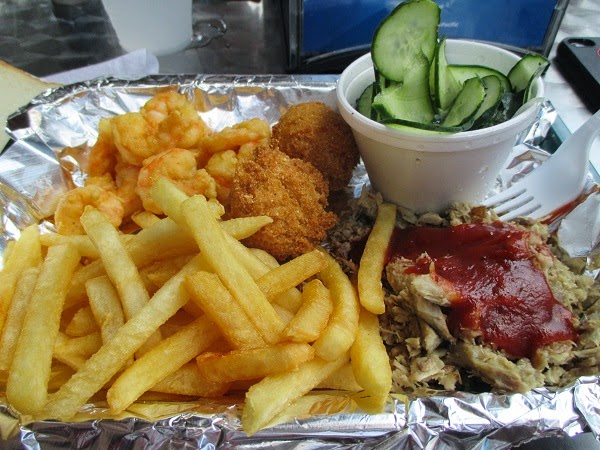 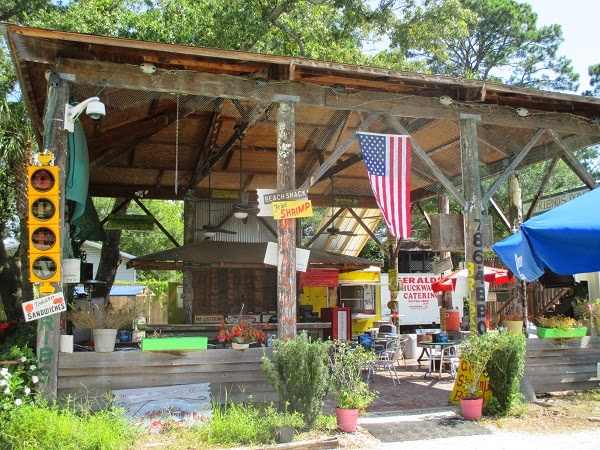 There’s a big painting on one of the trailers that form the one outer wall of Gerald’s. It’s painted with garish colors and cartoon characters and the slogan above reads “Friends don’t let friends eat imported shrimp.” The basic surf-n-turf plate here runs $17.50 and comes with a decent portion of oak-smoked chopped pork and eight absolutely delicious shrimp caught nearby earlier in the week. The cucumber salad is made with basil from Gerald’s garden. The fries, unfortunately, let me down. Our server apologized – she, like her fellows, was resplendent in island tie-dye – but they were not hand-cut like she had told me they were. For $17.50, I’d just as soon pass on frozen truck fries, thanks.

Two chapters ago, I described what I think of as classic Atlanta barbecue. The style is not strictly confined to northwest Georgia; there are pockets of this flavor of chopped pork served presauced all over the state, and here is a fine example of it. The barbecue was pretty ordinary, to be honest, and not as smoky as we like it, and it certainly shouldn’t have been smothered with the tomato-based sauce, especially when there was a much better option on the table. Among the many homemade recipes here, there’s a bottle of a mango habanero sauce that Gerald brews up and which can be bought to take home. This stuff has a tremendous kick and just a little brings out much more flavor from the meat than the tomato-based one.

But truthfully, any future trip to Tybee Island would first see us visiting some of the other restaurants before a return to Gerald’s, and on that occasion, I’d stick with the amazingly tasty shrimp and give those a drizzle of this hot sauce. It’s a pretty good place, with a fun and silly attitude, but definitely the emphasis here is on the shrimp, and not the pig.

One thought on “Gerald’s Pig and Shrimp, Tybee Island GA”