Chuy’s, a successful Tex-Mex chain based in Austin, has opened its latest (56th) store just down the road from us in Kennesaw, and invited me to stop by for a tour and some appetizers. This restaurant, the second in this market following the store in Dunwoody, is located along the stretch of Barrett Parkway populated by quite a few chains that get huge weekend business; in fact, it’s just two doors down from an On the Border, which struck me as curious, but Chuy’s marketing manager, Hilary Delling, assured me that the two restaurants are very different in taste, and diners will have very different experiences. Based on what I saw, I would agree.

Mike Barton and John Zapp opened the first Chuy’s in 1982 in what had been a former barbecue joint in Austin. (I’ve been unable to uncover its name.) The building was in an unbelievable state, and one of its ceilings so pockmarked that they wanted to repair it, but lacked the funds. They decided to hide all the damage underneath several dozen hubcaps, and this design element has carried on into their 55 additional locations. (They also, I’m told, later went back once they had some money and rebuilt the ceiling!) A hubcap room is common to each Chuy’s, as are several ceiling-mounted “streams” of hundreds of small wooden fish – there are 1455 of them in Kennesaw – but each location has several unique design elements as well. The owners want to go against the industry practice of having each restaurant in the chain look like every other. This one, for example, has a dining room with deliberately tacky palm trees made from recycled metal, and the walls of the bar are lined with framed photographs of dogs! 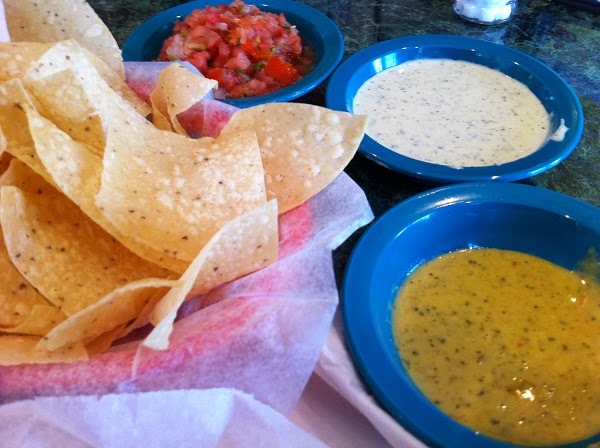 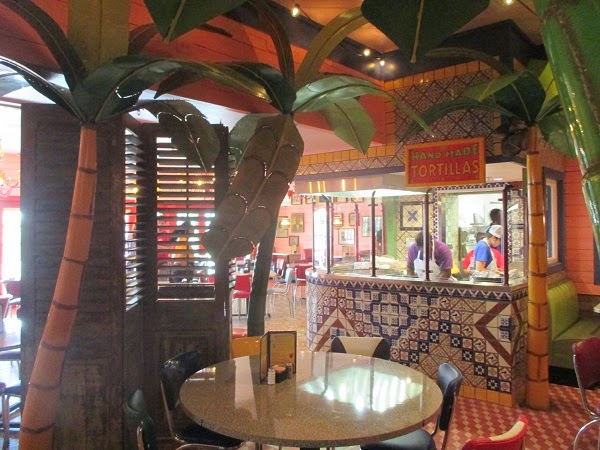 But you didn’t come here to read me wax about design geekery, you want to know about the food. It’s honestly several rungs higher than its contemporary competitors in this market. I got to tour the kitchens, and see the walk-in cooler, where the vegetables – delivered fresh six days a week – are stored, and it smelled like heaven. Chuy’s prides itself on fresh vegetables and meats, and sauces prepared constantly throughout the day. Their freezer is comparatively tiny – smaller than our refrigerator at home – and is used only to store fries and ice cream. That’s Chuy’s bad luck that they invited the only hobbyist in this town to make a federal case out of frozen fries over hand-cut, but you’ve no business ordering fries in a Tex-Mex joint anyway, and at least the ice cream is from Blue Bell. For a Texas-based chain, I’d expect no less!

I mentioned the sauces, and these really did impress me a lot, and promise great things. They have nine on the menu at all times, with an additional six in regular rotation. One of these six is a creamy jalapeño that, after its first month in rotation, went away for a time as planned and was met with howls of protest from Chuy’s fanbase. A Facebook page was launched to bring it back immediately. People claimed to be addicted to the “liquid crack,” and begged to purchase it by the gallon. Creamy jalapeño appears much more regularly now, and you can indeed buy a gallon of it, for $43.29. 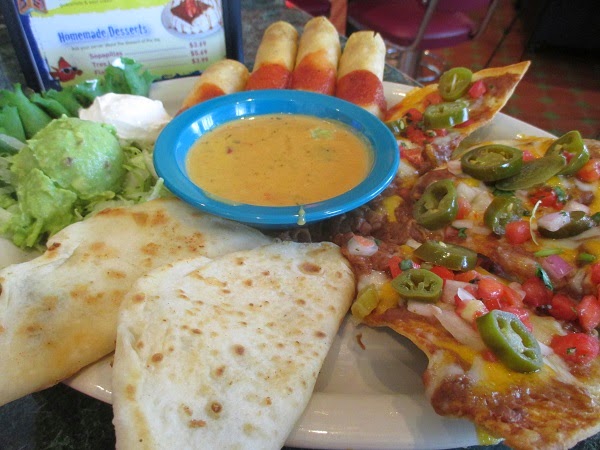 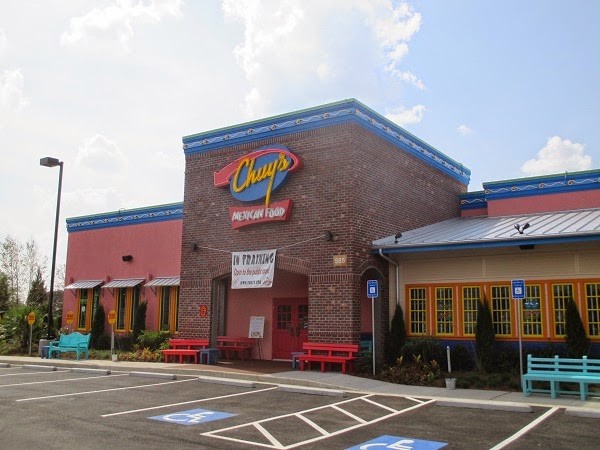 My favorites of the sauces, however, were the hatch green chile sauce, which was quite spicy and made with hatch chiles from New Mexico, and the boom-boom sauce, made with cheese, tomatillos, chiles, onions, cilantro, and lime juice. This spicy sauce, often seen ladled over their popular Chicka-chicka boom-boom enchiladas, was one of the options on the incredibly neat nacho car. The restaurant has a happy hour weekdays from 4-7, with complimentary nachos that you can build yourself from the trunk of an old car that’s been sliced apart to serve as a salsa bar.

I split an appetizer sampler plate with my friend Lindsey, who writes the great parenting blog Redhead Baby Mama, which every dad or mom reading me is bound to enjoy. The appetizer plate comes with chicken flautas, nachos on thick tostada chips, deluxe quesadillas with chicken, and hearty scoops of sour cream and delicious guacamole with a cup of cheese sauce. Like a lot of appetizer samplers at restaurants in this demographic, it’s far more calories than one or even two people need to have as an “appetizer,” but everything tasted really great. I kept it to one thing apiece. Along with a half-basket from the nacho bar, that was all the meal that I needed.

So the bottom line is that Chuy’s has a somewhat similar menu to its competitors in this category, but I was much more impressed by the food quality, the freshness, and the flavors than I have been at any of the Brand X guys. I think that, despite the fun atmosphere, they’re still a bit more corporate than I’d like, particularly in the beer department, where the roost is ruled by the same bottles of Bud Light, Corona, and Tecate as everybody else in the field. I understand that Austin has one of the best craft beer scenes in the country, and it would be lovely to see some examples from that world represented here instead of the same-old, same-old. Sauces and recipes as good as these would go much better with some really good beers from Austin. That said, corporate or not, the food is good, and we’ll certainly stop by a time or two to try some more things on their menu. Probably during happy hour.

(As noted, this was a media event and my meal was complimentary. It’s our policy to always note when we’ve received our meal without charge. If you would like to invite us to your restaurant’s media events, please drop Grant a line at gmslegion@gmail.com .)

Other blog posts about Chuy’s locations: