Parish, which I believe opened in 2007, is a restaurant in Inman Park that possibly every hobbyist in town with a blog has visited before us. Previously trading under the name “Parish Foods and Goods” (there’s a market downstairs), in August they rolled out a new menu and new name for their restaurant half, The Brasserie & Neighborhood Cafe at Parish. Chef Zeb Stevenson is bringing in local ingredients and designing some fun, whimsical plates, and these are more than amply matched by the playful new offerings from their new pastry chef, Kelly Lovett, who had previously been with Seven Lamps.

It’s new Southern, of course, and the New Orleans-inspired menu that many previous writers have noticed has been largely replaced. Even the popular shrimp and oyster po-boy has moved on, although they do serve both shrimp and oysters at their new raw bar. Parish’s owners, Concentrics Restaurants (they also run Two Urban Licks, The Spence, and other notable Atlanta destinations), brought us and quite a few others in for a media night a couple of weeks ago to try out this new menu, and see what Chef Zeb has been up to. 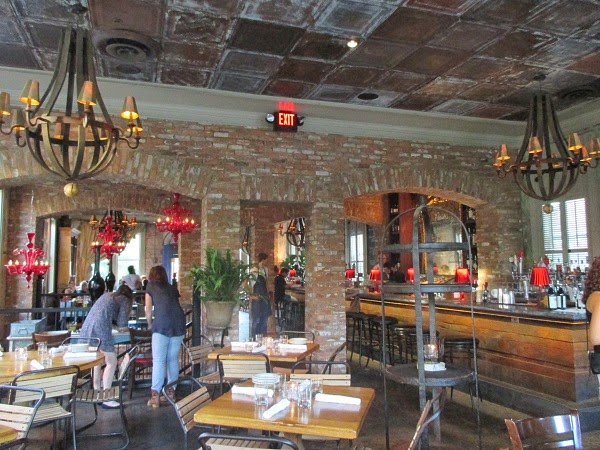 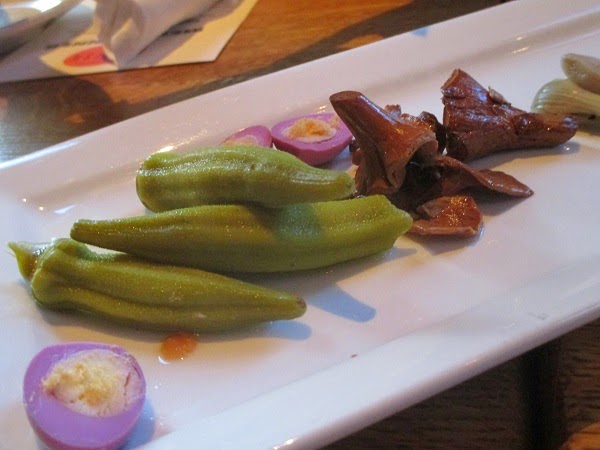 Parish is in a completely beautiful space, the only piece left standing from Atlanta Pipe and Foundry Company’s terminal building, constructed in the 1890s. We absolutely loved the exposed brick and the ceilings, and they found some gorgeous lighting fixtures to show off.

Chef Zeb is a big fan of pickling. We started with a great little sampler plate with eggs, mushrooms, onions, and the most heavenly pickled okra in the world. Wow, this okra was very tasty. Marie preferred the mushrooms to the okra, which she’s never cottoned to, but at least she tried some. 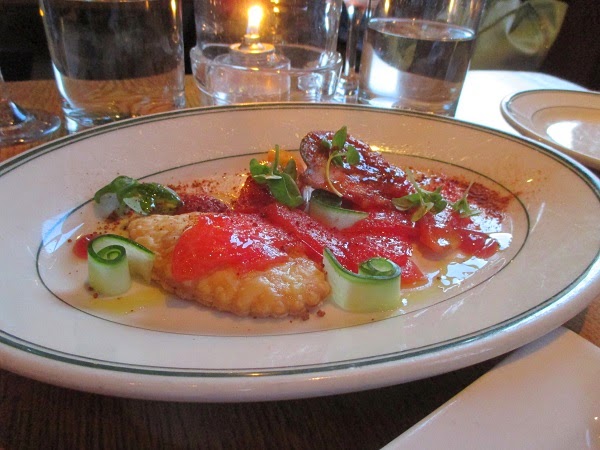 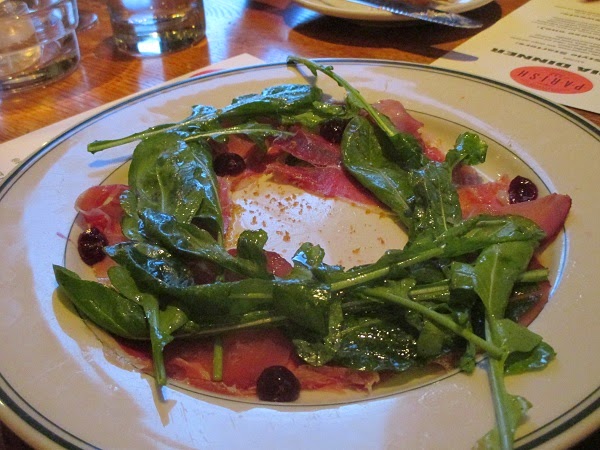 Our table got to sample several small plates. The black truffle grilled cheese sandwiches were insanely popular with everybody except me, so what do I know? I was wild about the tomato confit “tart,” made with some really good and extremely flavorful tomatoes, a little vinegar, and cucumbers. I also quite liked the poached wild pears with arugula and honey. Marie’s favorite item was the Korean-style fried chicken, done with a sweet kimchi glaze.

It really is a coincidence that, of all the lackluster photos that we took, the grilled cheese and the chicken, which Marie enjoyed the most, turned out the poorest quality. It is. Actually, I quite like that photo above of the tomato confit “tart.” That turned out well, didn’t it? 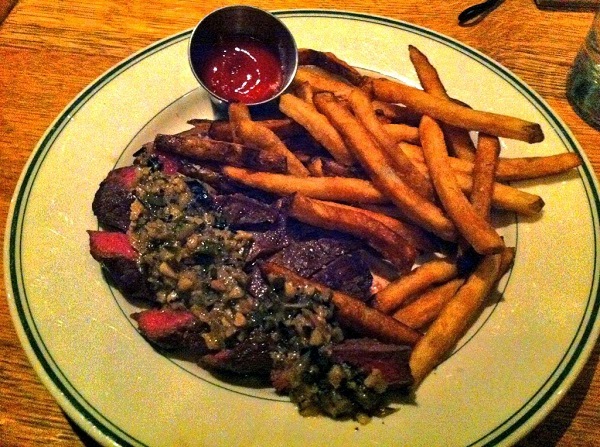 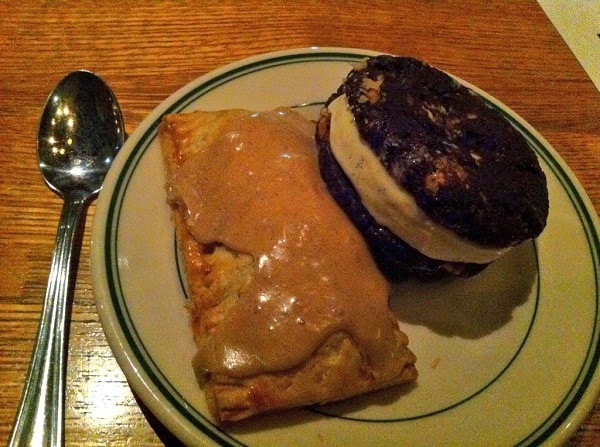 I wasn’t even thinking about the sides when I ordered a butcher’s steak; I was thinking about how, after a fairly good steak earlier in the month, I wanted a really good one and the odds favored me getting one here. I didn’t notice that it came with “pommes frites,” and was faintly jealous as other people were getting really lovely vegetables with their meals. But these fries turned out to be amazing. Chef Zeb told me that he believes that the fries, even more than the wonderful vinegar and garlic chimichurri, makes this dish. They’re fried in beef fat and they’re completely wonderful, especially with the potatoes soaking up the steak’s juices.

Marie ordered the salmon, which was served with a wonderful Hollandaise sauce made with corn and tomatoes, and was really pleased with it, although the table’s favorite was a terrific sourdough gnocchi, with mushrooms, a kale pesto(!) and tiny little slivers of candied lemon which just exploded with flavor. That was such a fantastic little addition to the dish.

The desserts that we enjoyed were just the definition of fun. I see from earlier reports that Parish has often offered their own takes on classic snacks, including such things as homemade “Zebra Cakes,” and wonder how great those might be when they don’t taste like chemical preservatives. (That’s the main objection in our house to Kellogg’s Pop Tarts, but about once a year, I just have to buy a box…) We got to enjoy homemade apple cinnamon tarts and ice cream sandwiches made with double chocolate cookies and they were both so tasty and inspired so much happy guilt. 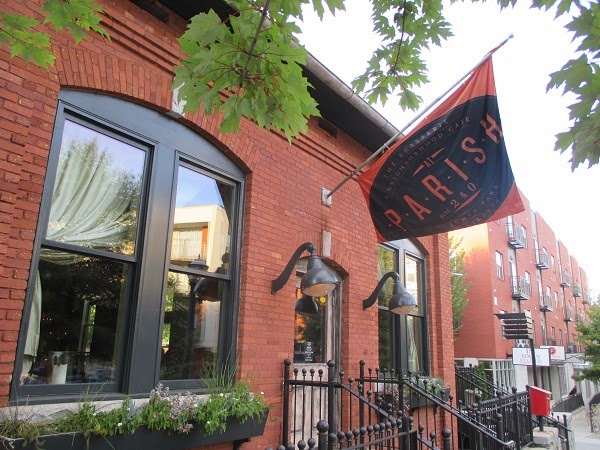 I wish that we had visited Parish before so that we had a direct comparison between the old and the new. We enjoyed ourselves a lot, and agree that this is a fun restaurant with a good sense of humor, making some really good things in the kitchen. The desserts are so fun that even if we’re dining somewhere else in the neighborhood (which, admittedly, we don’t do very often, although Inman Park is full of great places to try), we’d love to stop by to see what old/new treats they have baked that evening.

2 thoughts on “The Brasserie & Neighborhood Cafe at Parish, Atlanta GA”