We get a few more media invitations than we can realistically entertain, but I paused when LongHorn Steakhouse reached out to us, and, after I thought about it, I decided that I’d like to give them a try. A friend asked me whether I was feeling well. I took the ribbing because the simple fact is that, other than its less-than-stellar reputation among us food hobbyists (to put it mildly), I knew next to nothing about the chain. I thought that was unfair and decided that I wanted to see what LongHorn was actually about, rather than relying on perception.

I had not visited a LongHorn in close to twenty years, and was vaguely aware that the chain, which is owned by Darden, had undergone a mammoth refresh of its brand some time back. My parents had occasionally visited a location in the Akers Mill shopping center in Smyrna, and I remembered the experience as being full of tacky Texas shtick like jackalopes and very noisy twangy music, and that they had a loudmouthed comedy spokesperson called Flo, with a big beehive, glasses, and boots. That incarnation of the restaurant no longer exists, thank heaven. Faced with competition from imitators with similarly lowbrow design, like Logan’s and Texas Roadhouse, LongHorn decided to grow up.

I was curious to see what the newer LongHorn looked like, and so I accepted the invitation and gift card from LongHorn and, a couple of Mondays ago, took my daughter to the nearest location, in one of the two outparcel strips in front of Town Center Mall. The design is simple and unfussed, with dark, brown woods and a minimal use of framed paintings of cowboys. The decorations are all even and level, and not deliberately tilted to one side. There were no license plates visible. The music was quiet contemporary pop. While some of Darden’s brands still look like amusement parks, LongHorn Steakhouse has more in common, visually, with their adult-skewing concepts like Seasons 52 and The Capital Grille. 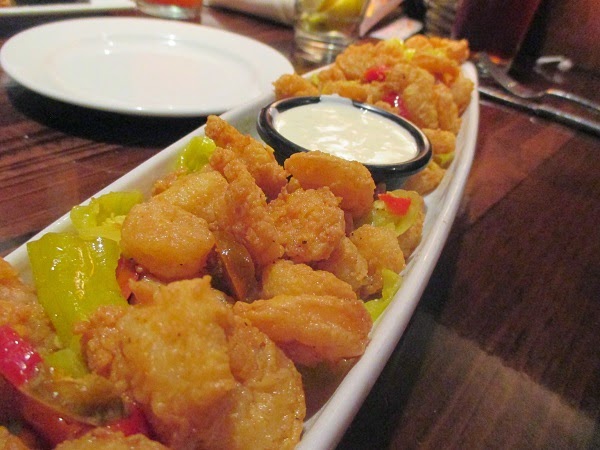 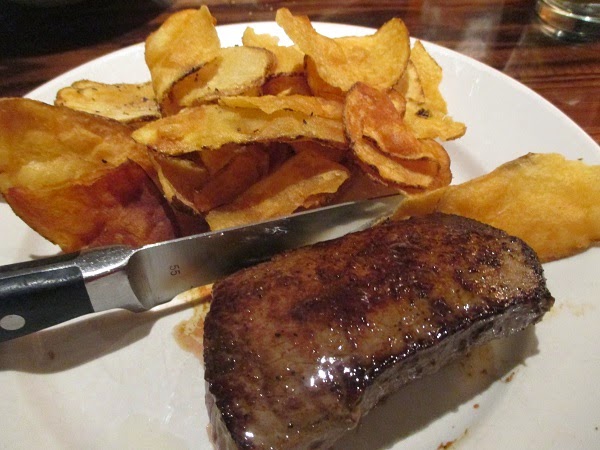 My daughter and I arrived shortly before seven on a Monday and found the place nearly empty. Everybody else who wanted supper at LongHorn showed up right at seven and overwhelmed the service as the large place reached nearly two-thirds capacity. That was very odd.

LongHorn has a busy menu with choices to suit anybody in your party, along with a bewildering number of monthly specials that get rotated in and out via additional cards. Their starters are separated into two batches: one is sized-for-one appetizers and one is for table-sized. My daughter ordered the homemade kettle chips – I had those as my side – and I asked for the Wild West shrimp, which come with banana peppers and a ranch dipping sauce. I’m not sure what makes these “Wild West,” but they were incredibly tasty. 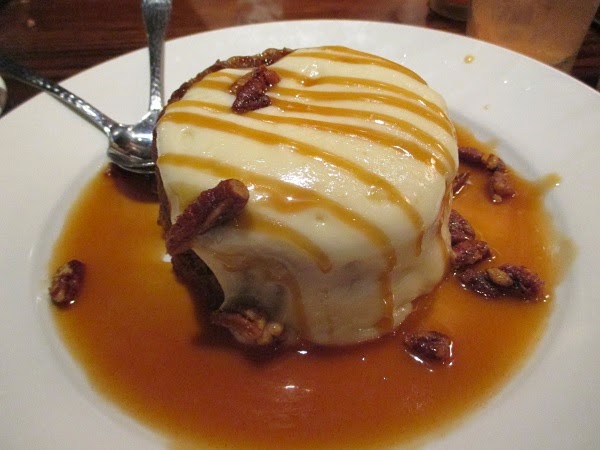 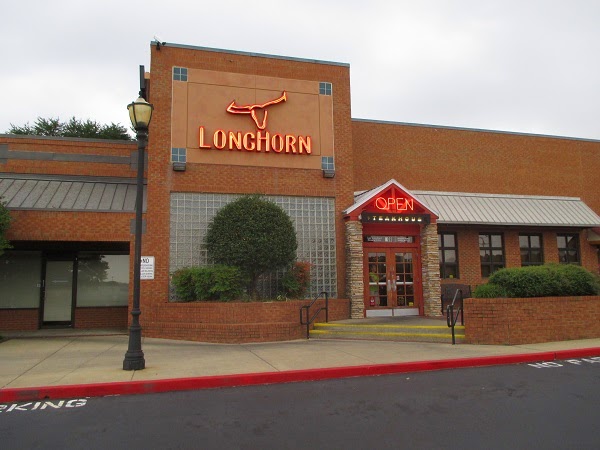 LongHorn built its reputation, before it crumbled away in the eyes of hobbyists, on the strength of its steaks. While it is currently headquartered in Florida with Darden, which bought the chain in 2007, it actually started in Atlanta. George McKerrow Jr., a former manager at the defunct chain Steak and Ale, opened the first store here in 1981. Legend has it that during SnowJam ’82 – the one that everybody talked about before the one this past February – McKerrow started selling dollar steaks and beer to everybody stranded in front of his store. The Atlanta Journal-Constitution’s Ron Hudspeth, notorious then for being something of a drinker and propped up at the bar across the street, saw a story unfolding and gave the struggling restaurant some priceless publicity in the next day’s paper, and the curious crowds that he generated kept coming back. Twenty years after SnowJam, Ted Turner persuaded McKerrow to join him in creating his Ted’s Montana Grill chain. So McKerrow certainly has a long career of preparing steaks for large crowds.

My daughter and I thought that the steaks were pretty good – I had a small sirloin, and she a small “Flo’s Filet,” the name commemorating the tacky faux-waitress of the 1990s, with a loaded baked potato. The quality is on par with LongHorn’s aforementioned competitors in the field, as well as with Outback Steakhouse. Depending on the desired cut, you’re looking at $13 to $40 for a steak with a side and a salad, which isn’t bad.

Actually, my daughter only ate about half of her steak and asked for a box to take it home, because she wanted dessert in the form of a pumpkin spice lava cake. I took one very small taste of the cake and found it too sweet to continue with, but she loved it, which is the important thing.

We found the service to be quite slow, in part, perhaps, because it appeared they were not expecting the large crowd that they received on a Monday. On the other hand, our server was really attentive and kept my daughter’s strawberry lemonade refills coming. We had a pretty good, reasonably priced meal and a good time overall. It may not be essential dining, but it’s certainly better than its reputation suggests, and I loved learning about the old Ron Hudspeth connection. It’s nice to see a local boy make good, isn’t it?