A couple of weeks ago, Marie and I were invited to join other local media at the Buckhead location of Seasons 52 to sample their spring menu. We were not familiar with this restaurant before. It’s a reasonably new “concept,” as it is termed in this business, from Darden, the corporation that owns such excessive-consumption chains as Red Lobster and Olive Garden. The first Seasons 52 opened in Orlando in 2003 and this store, one of two in Atlanta, opened in 2006. They have 27 locations in thirteen states.

Seasons 52 keeps a pretty low profile. They’re an upscale “fresh grill” and wine bar, and the word is definitely out to their target audience, because this chic, elegant space was nicely full on a weekday evening, but I’d honestly not heard of them before. Clearly, I was missing out, because the food here is very, very good, and their chefs and sommeliers do a fantastic job pairing great wines with their meals. The menu at Seasons 52 is updated four times a year to show off treats based on the season, and the restaurant strives to keep their meals themed with what is fresh and available. Coupled with a very interesting wine selection – they are grouped under the notion “Drink them before they’re famous” – this looks like a terrific place for a nice, romantic evening. 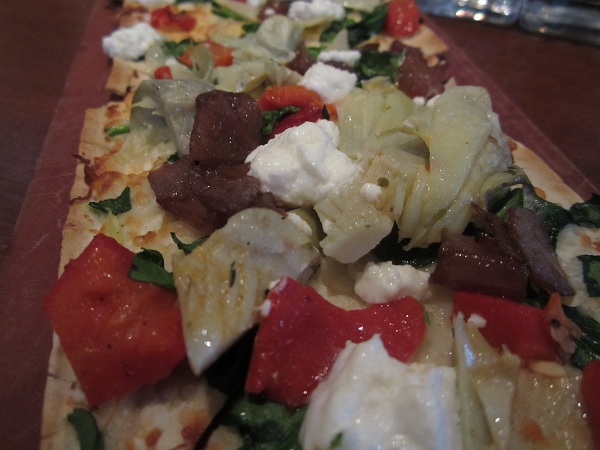 We met this location’s manager, Brian Farkas, who told us a little about the restaurant’s history, and Chef Brian Besaw. We enjoyed two of the store’s flatbread appetizers, a ripe plum tomato variety that Marie really liked, and one with artichokes, roasted peppers and goat cheese that I preferred. Most of us enjoyed a couple of glasses of strawberry Kir royal with them. Marie, who only agrees to wines when they are used in foods and the alcohol cooked away, definitely missed out on this, along with several other excellent drinks. While Marie was not taken with the artichoke flatbread, leaving more for me, she really liked the interesting artichoke-stuffed artichoke leaves, which were very savory and meaty. 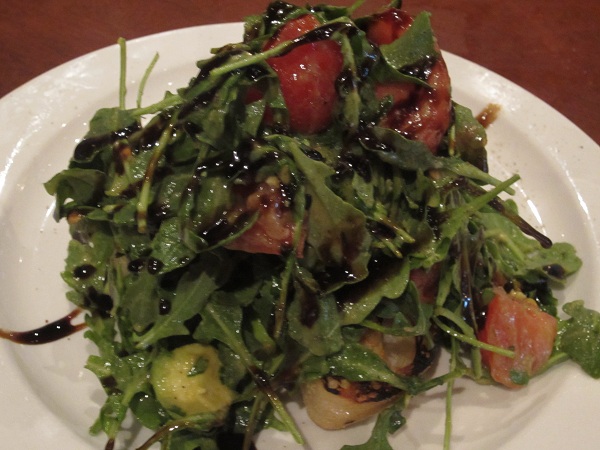 Completely unplanned comedy came in the familiar shape of Godzilla’s arch-nemesis Hedorah the Smog Monster, appearing here as a tomato and Haas avocado salad, made with arugula and served with grilled bruschetta. You don’t see it? Look, it’s simple, those two tomatoes on top are eyes, and… oh, please yourself. Anyway, it’s completely delicious and worth a visit by itself. It was paired with my favorite wine of the evening, a remarkably light and smooth glass of Aveleda Vinho Verde (Portugal 2010/’11). My curiosity about wine far outstrips my knowledge, but I know what I like, and I enjoyed this tremendously.

For entrees, we got to sample the steelhead trout from Washington’s Columbia River, served over basmati rice and with a very light lemongrass sauce, paired with Botani Moscatel (Sierras de Malaga, 2010). The head chef went for what was described as an “Asian spin” with a plate of spicy snow peas and shiitake mushrooms with almonds. This was paired with Lioco Indica Rose (Mendocino 2011), a wine so light that I was certain Marie wouldn’t object to the taste. I was mistaken. That said, this wine is exclusive to Seasons 52, and perhaps you’ll have better luck introducing a nice, light wine to somebody you know than I had. 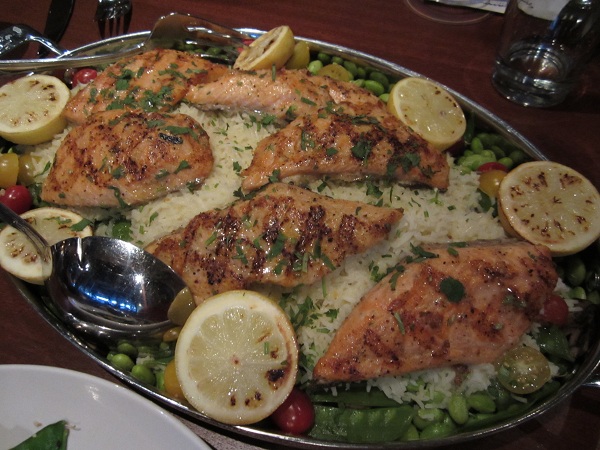 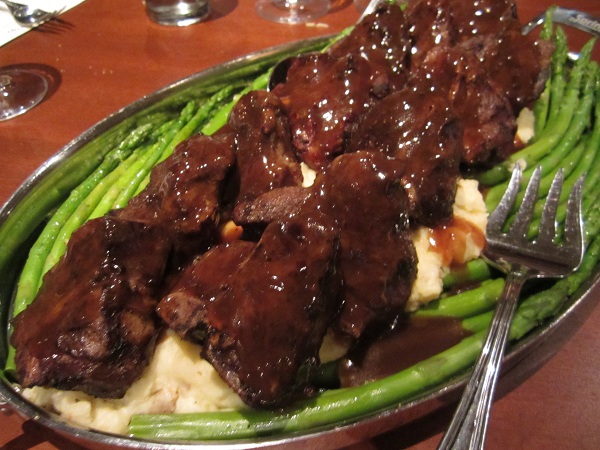 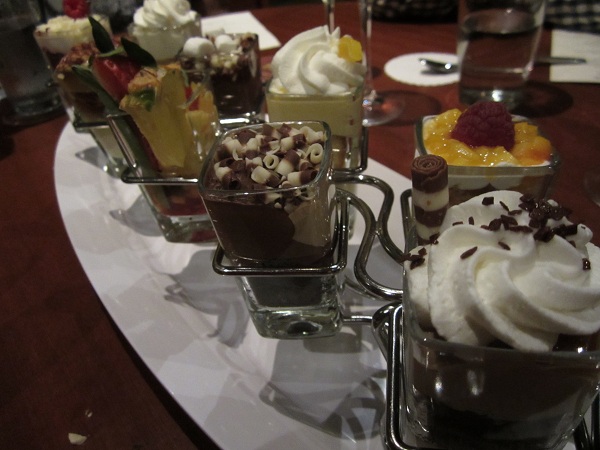 Best of all were the lamb T-bone chops. Ordered from the menu, these are served as three chops per entree, with asparagus, extremely tasty mashed potatoes and a red wine glaze. These were just wonderful and succulent, and we hope that Marie’s brother can come to town to try these. Not only does he enjoy lamb more than anybody else we know, we’re certain he will like this wine. The Allegrini Palazzo della Torre Corvina (Verona, 2008/’09) is what the restaurant jokingly terms a “turbocharged” wine. As I say, I’m still very much a novice and a little unclear on how this was described, so I looked it up. Apparently, with each harvest, 70% of the Corvina grapes are vinified, and 30% are dried until December. These are then used for what’s effectively a double-fermentation, resulting in a very powerful and elegant taste.

We shared a table with an editor from Jezebel and our friends from Atlanta Foodies. Rebecca believes that Seasons 52 originated the “mini indulgence” style of desserts that have been seen at many other nice restaurants in recent years. It’s a stark and very fun contrast to the over-the-top gigantic slices of more-fool-cake-than-anybody-can-eat that some other places that we enjoy offer. Here, the dessert tray brings guests several “shot glasses” of such treats as key lime pie, rocky road, chocolate peanut butter mousse, mocha Macchiato, strawberry shortcake and pecan pie. The desserts were paired with a very nice Riesling, which, because it’s from a German winery and those fellows don’t shy on the syllables, will have you asking for a glass of Selbach-Oster Bernkasteler Badstube Auslese (Mosel, 2006/’10) to accompany them. I’m a changed man: I usually enjoy a glass of milk with key lime pie, but evidently I’m going to need to pick up a bottle of Riesling for the house.

We had a really good time, and enjoyed visiting with some of our other friends in the hobby and meeting new people. If, like us, you’ve not been familiar with Seasons 52, I encourage you to find one in your area and go have a nice evening out.

Marie and I had what might have been a romantic evening for two at Seasons 52’s other Atlanta location, in Dunwoody by Perimeter Mall, this evening, except Baby Made Three, and he also made an incredible amount of noise. That said, the staff was exemplary, and we enjoyed our meal, which included a garlic chicken flatbread, a Greek salad, a bowl of black bean and pesto soup, and Chicken Citron, with a wonderful Meyer lemon, which Marie, grouchily reflecting as we tried to remember what we ate in between bouts of the baby being so uncooperative, she didn’t even eat. 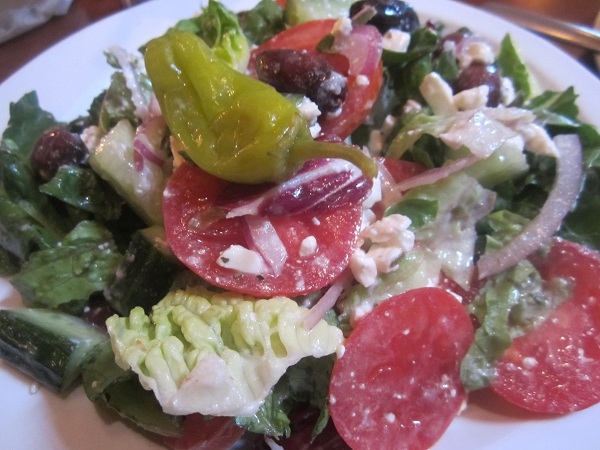 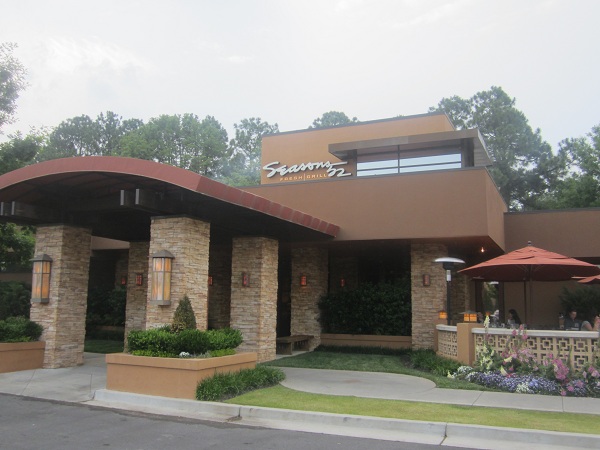