A couple of weeks ago, Marie and I had dropped off our daughter with her godmother for an evening of pizza and dressmaking, and then joined the long, slow crawl of cars making their way along Hammond to replenish our stock of Penzeys Spices from their wonderful store in Sandy Springs. Among other things, we had run out of Penzeys Sandwich Sprinkle; bread was not tasting right anymore. We did not have any specific plans for supper; we figured that we would eat wherever the mood struck. Once we finally made it to Roswell Road, we started moving and passed Rumi’s Kitchen. The name was familiar, but I couldn’t place it. We got a fabulous recommendation from the girl who rang us up at Penzeys, who told us that their Persian dinners were completely wonderful.

Ali Mesghali opened this place in 2006 after finding success working at some other highly-praised restaurants in the city, and conventional wisdom has it that this place is his best yet. He certainly employs an excellent staff. We were only the second couple to arrive for supper – all the better to dine with a more-fidgety-than-normal-baby and not disturb very many other guests – and so we got what felt like an overabundance of personal attention from servers who wanted to take the time to let us know what they offered and what went best together. As the restaurant filled, I saw the same attention everywhere. It was absolutely unhurried and the complete opposite of frantic. Often times, dining out, I don’t mind at all seeing the tornado of chaos around us as the staff tries to turn tables over and get more guests in. It’s refreshing to see a staff take the opposite approach, and give guests time to linger and relax. I would suggest that the curious either book a table or plan to arrive early.

They started us off with a basket of flatbread and a tray with tarragon, mint, butter, radishes, olives, walnuts, and cheese, all the better to clean our palates before the entrees arrived. 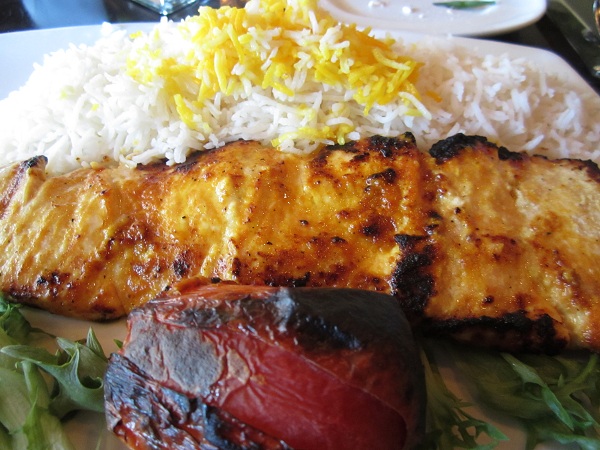 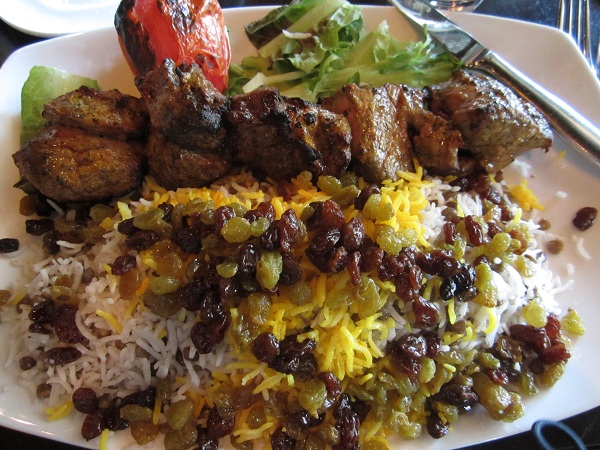 Marie had a lamb dish and I had the chicken barg, and while we each enjoyed the taste of the other’s meal, we both felt that we ordered the right things for ourselves. I was so impressed by how very flavorful the meat was; the spices lingered like they should, staying with me for several minutes. We ate slowly, savoring the taste and found ourselves taking home a fair amount.

The baby got crankier as the evening went on, and so Marie and I were not really able to enjoy what might have been a very nice and romantic meal had it been just the two of us. It’s kind of hard to do that when you’re having to take turns walking the baby out of earshot of other diners. I fear he’s reaching the age where he’ll be like this more often than not.

Other blog posts about Rumi’s: