A couple of Fridays ago, I did not have any lunch plans, and my manager, Krista, suggested I try Crawfish Shack, a restaurant that she and her boyfriend visit for special occasions. While not even remotely a “shack” – it’s in a reasonably new strip mall near the shuttered driving range on Buford Highway, fairly invisible to the street – it looked like this place had won the attention and praise of many of my fellow hobbyists since it opened in 2008. It hit a rough patch of no business soon after it opened and was forced to close for a few months, but it’s been going like gangbusters since they reopened, with a very respectable crowd coming in for lunch and sharing the long picnic tables.

I was pleased to visit a Cajun-themed restaurant without any Mardi Gras trappings. Instead, the interior is done with the same wall decor as, of all things, a Captain D’s or something. The restaurant is, like many on this stretch of road, staffed by young Asian-Americans. The link between Louisiana seafood cooking and the families of immigrants was explored by John T. Edge (he’s been mentioned a time or two on this blog, you know) in a 2010 article for The New York Times. Crawfish Shack is owned by a young man named Hieu Pham, Atlanta-born and Georgia-bred to a father from Vietnam and a mother from Cambodia. In the earliest days, the Phams worked here seven days. Since their success, they’ve been able to hire more staff and spread out the backbreaking among some employees 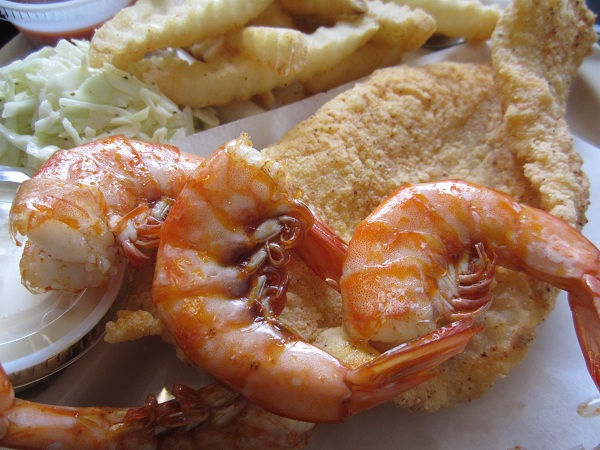 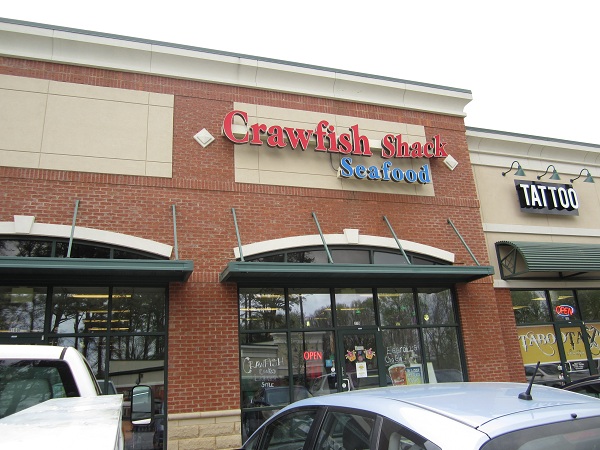 I wish that I could say that my meal was a revelation, that the mix of seasons and styles resulted in something that I’d never tried before, but I can’t. What I can say instead was that this was a very good, albeit traditional-tasting, lunch of grouper and shrimp, served fresh and at a really terrific price. Perhaps I might have found something more pleasantly surprising had I asked, but I was good with something simply pleasant.

For dessert, I surprised Marie by swinging by Frosty Caboose in Chamblee, buying a chocolate milkshake and taking it to her office. We got to spend a few minutes together in her office’s cafeteria before I tackled what turned out to be a horrible early afternoon commute home. We had a pretty relaxing weekend around the house, staying in town, cooking some nifty quasi-chicken pot pie, and trying some popular Atlanta restaurants that we’d not visited before. More about those in the next couple of chapters.

Other blog posts about Crawfish Shack: