This is Marie, contributing an article about Crawfish Shack on Buford Highway. Our regular readers know that we have been diligently collecting restaurants along this stretch of road for a while, though our travels have not left us many opportunities for revisits, or for the family to go together to a place that Grant first visited on his own. But we made time for this one after our friend Leslie, who writes The Food and Me, suggested that we meet here.

Most of the Buford Highway restaurants that we’ve been have been Asian of one flavor or another. Crawfish Shack is (mostly) outside that tradition so it was a bit of a change in pace. The owner is Asian by ancestry and picked up Cajun influence on his cooking because of an annual trip to Louisiana his family took in his childhood, according to the bio on the web page. I can’t say I could detect any Vietnamese influence in the food, but would not be at all averse to checking more of the menu items to try and find some.

The interior is very much like what it would look like if the logo picture on their menu were accurate – their dining room really ought to be placed in a rickety building on the end of a pier with a boat tied up at the side. Instead, it is in an otherwise bland mini strip mall with a big empty lot next door. We were however quite happy that it was set where it is, however, since our dinner company was unavoidably detained and we had to watch the toddler run yelling through the clover, getting his quite considerable stock of wiggles out, and that would have been rather more dangerous on a dock. Sadly, he did not quite manage to exhaust his wiggle supply, but he was still reasonably good once provided with some of the Zapp’s potato chips on sale in the line. He considered them good enough to attempt licking the bag for residual flavor. It’s not the most incredibly baby-friendly location, having very few high chairs or places to put them as the tables are mostly picnic-bench style, and the service is forced to be rather slow due to the cooking process of some of their items. There’s even a good-natured disclosure on the chalk board promising that the po’boys are good enough to be worth the wait. 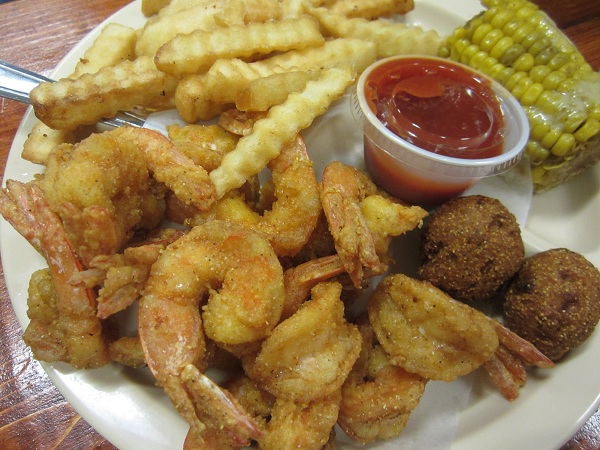 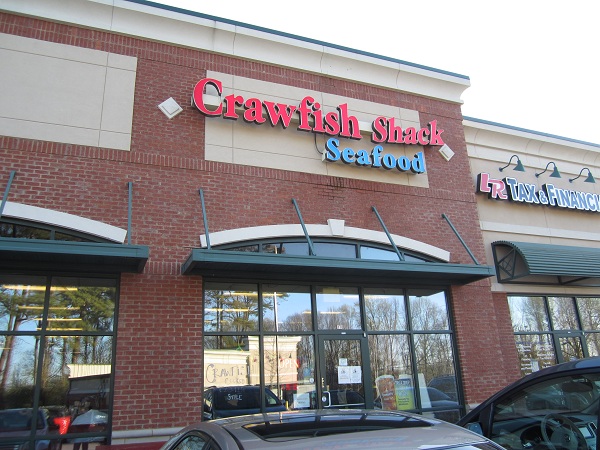 The line for ordering at the cash register was Disney-esque but a little shorter than when we’d originally arrived. I had to admire the huge shrimp in the display/refrigerator cases that the line snakes past. The crawfish must have been in a tank the size of a swimming pool in the back, because there were at least a dozen bowls of them on the tables around the place, and each bowl could have rivaled Darth Vader’s helmet. I apologize for the analogy. I personally can’t eat crawfish as I’m rather tender-hearted so their mode of demise troubles me, but boy did everyone with those helmet bowls appear to be enjoying their suppers.

Grant got a catfish po’boy, which took the implied age and three quarters to arrive, along with four pork boudin balls that he shared with the girlchild*. I got Meal #5, intending to share. That was fifteen shrimp – they actually brought me sixteen – with two sides, which were fries and corn, though I did have to ask to leave off the Cajun spice on the fries for the baby’s sake since he would be eating more of them than I was planning to. While his tolerance is increasing, spicy things still make his mouth sad. My food actually was among the first to arrive.

The girlchild claimed that all she wanted was some chips and a serving of fried mac ‘n cheese, but helped get rid of fries the boychild was too stuffed to handle since hers took the longest to get to the table. We have the most adorable photo of him trying to wrap his mouth around an entire half-ear of corn. Leslie also got a po’boy sandwich and some oysters and also enjoyed her food tremendously.

Overall, I would recommend going here without a baby along, (though there were some others present when we arrived), just because you can’t rely on a table being available and the wait may be more than yours can handle. The food is excellent and visitors should definitely expect the place to be crowded unless you like dining at off hours. Maybe if the business continues as it has, the owner will take over yet another of his neighbors and expand the dining area again.

*Worth noting: earlier this week, the boudin balls were included in Creative Loafing’s latest iteration of Atlanta’s most essential dishes.

Other blog posts about Crawfish Shack: