Not unreasonably, we were once asked whether we ever eat at the same place twice. Clearly we do – hence this month’s trio of “take two” entries – but we don’t really go back to even favorite places all that frequently. One exception, however, is the Cheeseburger Bobby’s near us on Barrett Parkway, where we go as a family about three times a month. Admittedly, you can find three or four better burgers in the city, but we find Bobby’s perfectly fine, especially for the price, and we love the customization and, especially, the service. If there’s a restaurant in Atlanta with a better crew than the Cheeseburger Bobby’s on Barrett, it’s news to us, and you might have noticed that we eat out a lot.

The first Tuesday this month, however, it looked like we’d not make it home for supper. The four of us were down in Vinings for one reason or another, and I-75 and every conceivable artery north were all choked with traffic after a horrible accident at Delk Road. It was just past seven, and the baby needed to eat, so we were thinking about local alternates. That’s when I remembered that Cheeseburger Bobby’s had opened its first inside-the-perimeter location, just a few miles away from where we were.

Mt. Paran Road, for those of you who don’t know it, is just about my favorite in the city. It’s a fun, pretzel-twisty, residential two-lane that connects Vinings and Sandy Springs, and it absolutely should not ever be driven at sixty miles per hour at three in the morning with your headlights turned out, certainly not, you don’t know who is reading these things, and shame on you for thinking such things, you have kids now. Ahem. Anyway, a quick roar – I mean, a safe and leisurely speed limit-abiding jaunt – down Mt. Paran to Roswell Road and south a few lights through Wieuca will bring you to Bobby’s newest location.

Wait ’til you get behind an entire flotilla of bicyclists stretching their stupid legs on a road made for driving fast. Then you’ll know about roaring, and rediscover long-forgotten swear words. 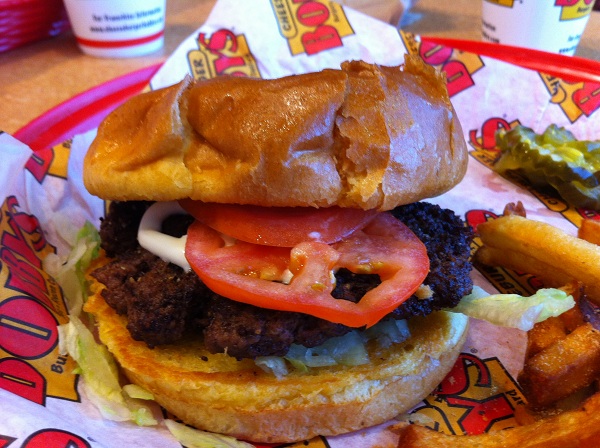 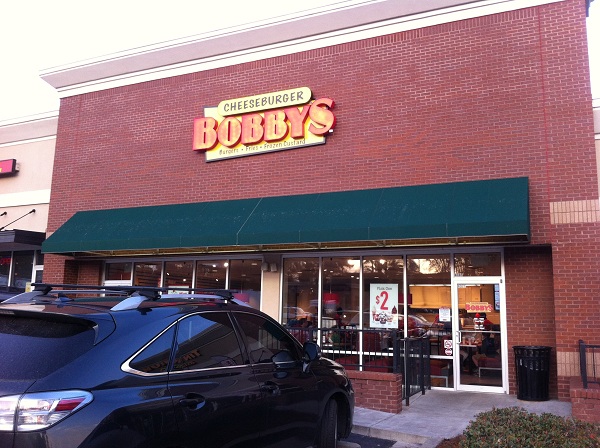 Cheeseburger Bobby’s has been a suburban fixture for more than five years now. They’re still touting the “voted best burger” award that their Hiram location won back in ’07, and their stores in Marietta, Canton, Peachtree Corners and Flowery Branch have all been doing well and packing in local families. Looks like they decided that the time was right to move into the tougher metro area and flex their muscles. After all, anybody leaving Atlanta via the interstate in the last three years has seen their omnipresent billboards already; the brand recognition has been growing.

They’re opening two spaces on Roswell Road, not an easy avenue for a restaurant to thrive. The first to open is this store in the Roswell-Wieuca Shopping Center, on the left as you’re driving south into the city. It’s between a Willy’s* and a Tin Drum, which is awesome for those of us who enjoy the hometown pride of having three small Atlanta-based chains next to each other. The space had briefly been courted by the Varsity, another Atlanta-based chain. In September and October of last year, Tomorrow’s News Today reported that chain’s hopes of opening a new Varsity Jr. in the space, but they withdrew. Cheeseburger Bobby’s opened in March and looked to be doing very well on this weekday evening. Perhaps it was the novelty of something new, but when we visited, it was 7.30 on a Tuesday and the place was still packed with families.

The second location, due to open soon, will probably prove to be Cheeseburger Bobby’s greatest challenge yet. They’re opening just north of the perimeter, in Sandy Springs, in the same low-visibility site where two separate franchisees have failed to make Boardwalk Burgers & Fries work. Our fingers are crossed for ’em!

Is this the best burger? Honestly, no, it doesn’t compare against the Vortex or Farm Burger or Bocado or Holeman & Finch or those big boys. But it’s very good, particularly when compared to its rivals in this “fast casual” category. It has amazed me, and not in a good way, how both Five Guys and Smashburger have deteriorated so incredibly in such a short time, to the point that neither are worth eating, ever. Cheeseburger Bobby’s has maintained a consistent quality and is much better than either of them, so I have no qualms calling this the best and most reliable fast casual burger in town.

Their fries, once upon a time a minor disappointment, were improved some years ago and are always munchable, and their custard desserts are just terrific, with a chocolate dipped cone that rivals the ones at Zesto. I enjoy my burger with a heavy shake of pepper, lettuce, tomato and a little mayo. Marie likes hers with ketchup and sweet pickles. It’s become something we really look forward to every week. The baby finds the store’s name a bit complicated, and calls it “Fries Hot Dogs Yay.” He looks forward to it as well.

Mind you, I’d be happy if we could go one stinkin’ week without the girlchild begging for a custard parfait. One week, that’s all.

*I read at Tomorrow’s News Today this week that this was the original location of Willy’s. I had no idea!

Other blog posts about Cheeseburger Bobby’s: