We finally got back over to Doraville to try a place whose big, sizzling impact on the local food hobbyists has long since faded away, but I’ve got to tell you, Bo Bo Garden still knows how to put together a fine evening full of excellent food. Marie and the baby and I joined a huge mob – 23 adults – for a senses-disorienting couple of hours here and enjoyed ourselves tremendously.

This meetup was organized by a friend named Edgar, who has traveled everywhere and who lived in Hong Kong for a while. He says that the Cantonese dishes at Bo Bo are almost exactly like what he experienced in south China. This is the real deal. He gave our table some start-off suggestions, but it was so noisy and chaotic that I wasn’t able to hear any of the discussion between our table’s server, who was making sure that we got a good variety of tastes and flavors, and the person assigned to order everything. I just crossed my fingers and hoped that I brought enough cash. I did, and $18 a person including tip was remarkably reasonable for a really filling meal that included soup, dessert, and samplings from what I believe were nine different entrees.

When Bo Bo Garden first opened in 2009, it was with Danny Ting at the helm. He had left the popular Wan Lai, which has since closed, and came on board Bo Bo not just as chef but with an ownership stake as well. I think that he was here for about two years before he moved on, and started up a place in Duluth called Golden House. He was there for less than six months before moving on to Coco’s, which didn’t bowl me over at all when I visited. I’m not sure where Danny Ting is now, or whether the current chef and staff at Bo Bo are adhering to his original recipes. 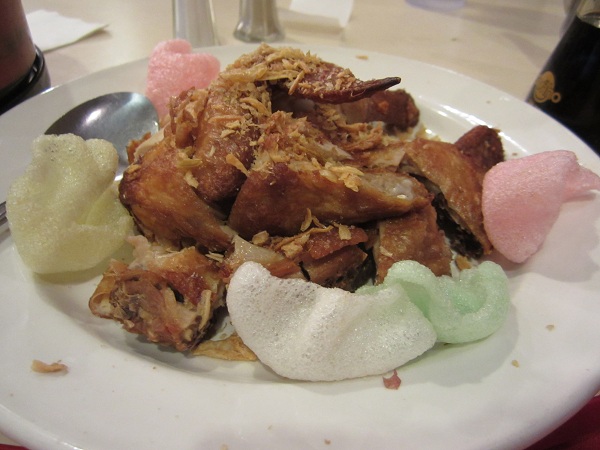 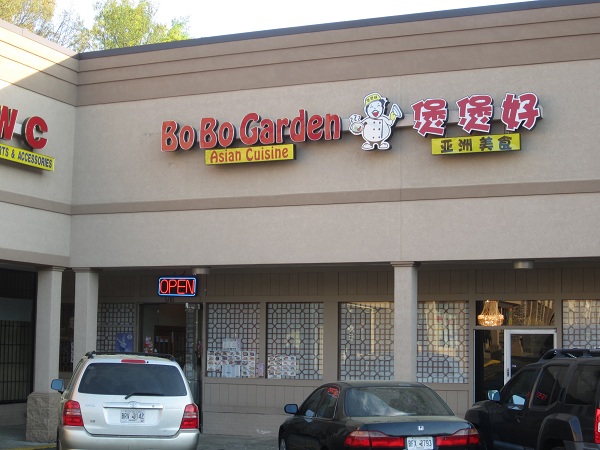 This should have been a meal accompanied by lots and lots of photos, but dishes were coming out and being attacked very fast, and all of my pictures were pretty terrible. We started with a beef and cilantro soup, which was the only thing that I did not enjoy, but then again, I don’t enjoy soup as much as most people. There was a small appetizer of pork leg, and some really excellent entrees. I enjoyed the salt and pepper squid the most, but the crispy garlic chicken might have been the table’s favorite.

Steamed tilapia was also very popular, as was a slightly spicy ma po tofu. I also liked the beef with wide rice noodles and the beef with eggplant. Marie was very pleased with a dish of steamed snow pea shoots, and the baby ate his weight in asparagus and oranges. He was astonishingly well behaved, by the way. He’s terrific in restaurants most of the time, but we were exceptionally impressed with how well he did among a huge crowd of complete strangers. He munched happily on Goldfish crackers waiting for food to be brought out and he tried lots of different things with occasional punctuations of “Mmmmm!” I hope that he’s always this good.