I think that like all of us, even the directors of films that didn’t pass muster with him, I had to pause for a moment of heartbreak when Roger Ebert passed this month. I don’t believe there’s a person in the United States that has penned any kind of film or TV or music or literary or video criticism in the last thirty years who has done so without the influence of “Uncle Roger.” Since I’ve walked those avenues, both professionally and blog-a-fessionally, for more than twenty myself, I’ve always been acutely aware of his writing and his passions. I stopped reading him regularly quite some time ago, around the point where feature films stopped thrilling me the way that they once did, but I almost always went back to check his opinion on whatever movie I had just seen. Or whatever Pedro Almodovar has made lately; I never actually get out to see his movies anymore.

I didn’t agree with him all the time, of course. I don’t think anybody who’s ever written about cinema has ever been as wrong as Ebert was about David Lynch’s incredibly good and superbly entertaining Blue Velvet. Ebert hated it. He just couldn’t stand it. He was so blind to its brilliance – I think it’s one of the best films of the 1980s – that he couldn’t possibly be trusted to be right about anything else. Except when he was, which was, honestly, most of the time. When every geek and nerd in the country finally got the chance to exercise their years of pent-up outrage about Zack Snyder’s mostly excellent Watchmen, I took quiet pleasure in pointing out that not only did Ebert give it four stars, he wrote about it twice.

Ebert’s voice was so well-known that it was a particularly cruel and horrible twist of fate to learn that he’d lost it permanently in 2006. By then, he’d become such a beloved cultural figure that parodies of him were as omnipresent as the appearance of his testimonials on movie posters. My favorite of these was an episode of the TV cartoon The Critic, where the hero arranges a reconciliation between the squabbling Ebert and his partner-in-criticism Gene Siskel. I was always impressed with the duo’s willingness to play along with this, and similar jokes about their friendship.

Along with his voice, though, Ebert lost the ability to eat. There could be no meaner turn of events than that, because Ebert loved Steak ‘n Shake the way that I love barbecue from Old Clinton. He wrote about the chain’s steakburgers more than once. In this celebrated 2009 essay, which has probably been linked to and read more times this month than in any other month since he published it, he shares with the world how much he loves the place. I’m struck by how he writes it in the present tense, and how, even though it had been more than two years since cancer stole his ability to enjoy it, he doesn’t waste time or words lamenting his inability to eat. To use the past tense might imply that his favorite restaurant is not what it was, but he tells his readers with confidence that Steak ‘n Shake is, and remains, and will always be, wonderful. 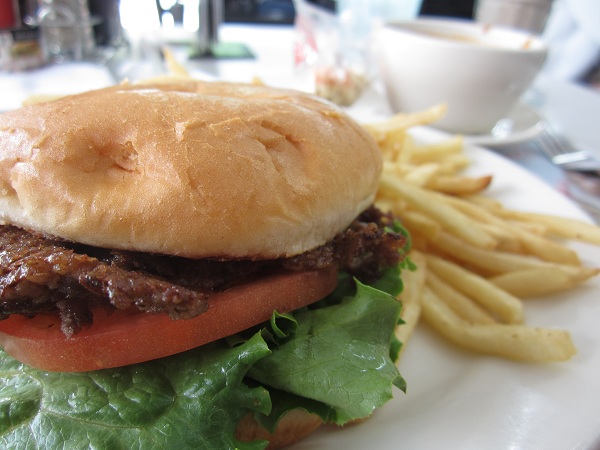 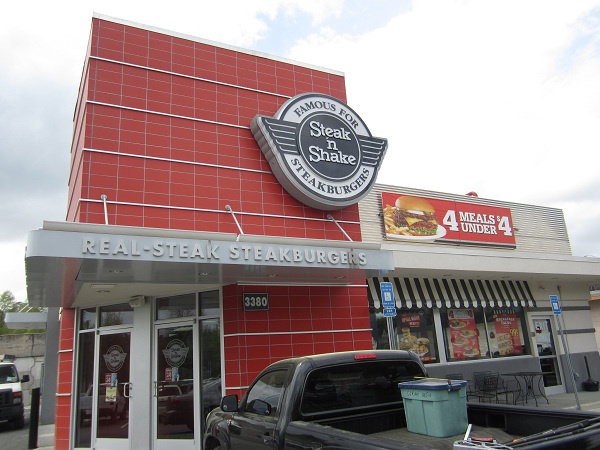 I raised a milkshake to Ebert’s memory a week or so after cancer came back to finish the job it started on his face. I rarely visit the chain anymore, but I just wasn’t able to read all of the wonderful tributes to him without thinking about Steak ‘n Shake. Then some coupons arrived in the mail. A double-patty steakburger, a shake, and two sides for six bucks? And heck, there’s a Steak ‘n Shake right off the highway on the way home. I’m finally – after years of telling you good people about my odd schedule – working something a little more sensible these days, and finish work at 12.30 on Thursdays, by which time every place is open for lunch, and I don’t need to sit under a tree with a book for an hour or more waiting for some place I want to sample to open their doors.

Not that it matters, as Steak ‘n Shake is open 24 hours, but it’s worth saying.

It’s a pretty decent burger, but I wouldn’t make a pilgrimage to Urbana, Illinois for one. I like mine with lettuce, tomato and mayo. I like a little ketchup on the shoestring fries, and I kind of like their chili, which is available in cans at the register to takhom with your sak. I honestly prefer vanilla shakes to chocolate, but I read somewhere that Ebert liked chocolate shakes, so I had one of those, served in a tall and fancy glass with whipped cream and a cherry. This one wasn’t too thick. It felt kind of watered-down.

In point of fact, there wasn’t one item at my table that I couldn’t have enjoyed more somewhere else. But that’s okay. This wasn’t for me, it was for Uncle Roger, and he wouldn’t want anybody to sugar-coat their words on his account. I’m sure that many people will think of Ebert when they visit or drive past a Steak ‘n Shake for many years to come. There are worse legacies than having three or four hundred restaurants around the country constantly sparking memories of you and your words for all the thousands of people who drives past.

We sure will miss you, Uncle Roger.

Some other blog posts about Steak ‘n Shake: