This is Marie, contributing an article about a media event at Seasons 52 for the summer menu launch.

Seasons 52, as you may know, showed up in a prior chapter. They deserve another mention, however, as they work really hard to have a varying menu based on the freshest food available. Their original concept of having whatever was freshest and best on any particular week ran aground on the shoals of frustrated recommendations (“But my friend said you had the absolute best [whatever] and I should have it too!” “So sorry, that was last week. This week we have [new special] would you like to try that?”).

People do tend to go to a particular place for a favorite item, even if only part of the time. If you were a foodie who ate there every week, you’d love the place, and I do rather regret that a) I don’t have the budget and b) they aren’t doing it any more. However, the 4-season menu change means there are refreshing, new things on the menu frequently, and they do still have some specials that come through for briefer times. For instance, you should go RIGHT NOW and get some of the last of their absolutely lovely wild Alaskan Copper River Salmon before it goes away until next year. It is served on a bed of sweet corn risotto with asparagus and roasted peppers and I could have eaten two…if there hadn’t already been several lovely things served before it, and more to come. The lobster spring rolls are particularly nice. The spicy red sauce is the best one.

Now, I have to say that I missed having Grant along for this one because this restaurant in particular is ill-served by having a teetotaler reviewing its menu, because the drinks are a true partner to the food. Grant would have been much more able to speak to them, but the watermelon coolers at the beginning of the meal, the Honig served with the vegetarian option, and the dessert Moscato seemed most popular. Even I could tell that the wines were good, even though I am unable to enjoy them properly. Therefore I will remain silent rather than be seen to damn with faint praise. 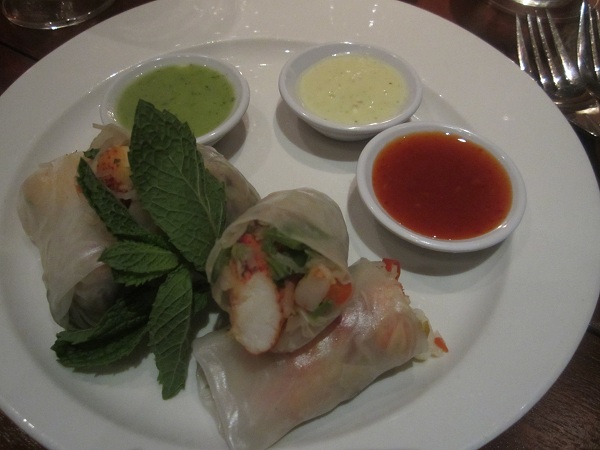 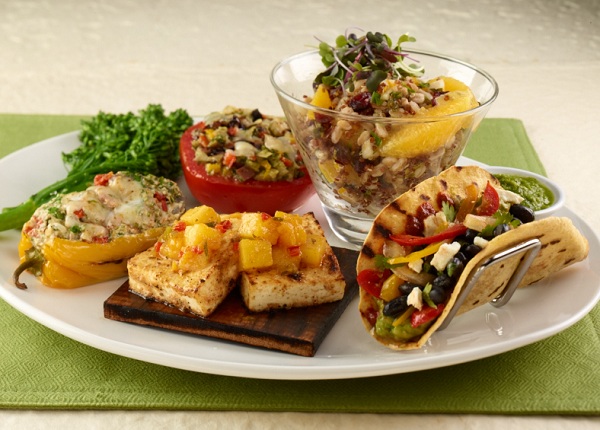 Sadly, the reason I was there without him is because we’d had more than a tough week – we’d had a truly horrible one, with things going every which way but right – and he sent me to take a break from things that he dealt with instead. The visit was a little bittersweet but one of the things about really good food is that whatever kind of week you’ve had, if you sit down to something crafted really well and carefully, with a lot of love put into the small details, it can really help to get you past your troubles. I recommend the vegetarian plate in particular for that. Take a look at that photo above, a publicity shot provided by the restaurant – wouldn’t you feel better just seeing it in front of you? The tomato with balsamic vinegar is particularly lovely. We had a good long conversation about the quinoa in that dish, as it’s one of the few non-animal products with a full complement of amino acids. That of course appealed to the science geek in me, but the foodie part just liked the way it tasted. I want to try it in some other things, maybe with wild rice. The salad we tried was good, too, with golden beets and toasted pistachios. I don’t even like pistachios, and I was picking through the salad to make sure the plate wasn’t taken away with any nuts left on it..

One of the more humorous points of the meal was when they were talking about their Piedmontese steaks. Seasons 52 has a goal of making each meal no more than 475 calories, which has made putting a steak on the menu a real challenge. This particular beef is more related to buffalo than standard cows and helps them fill their needs, but they said that the cattle were particularly difficult to raise because they were just so mean. That for some reason really tickled my fancy (and this is something that no vegetarian will agree with me about) which made me feel quite pleased to eat the steak. Maybe it was just because it felt like getting back a bit at the cussedness of life in general. 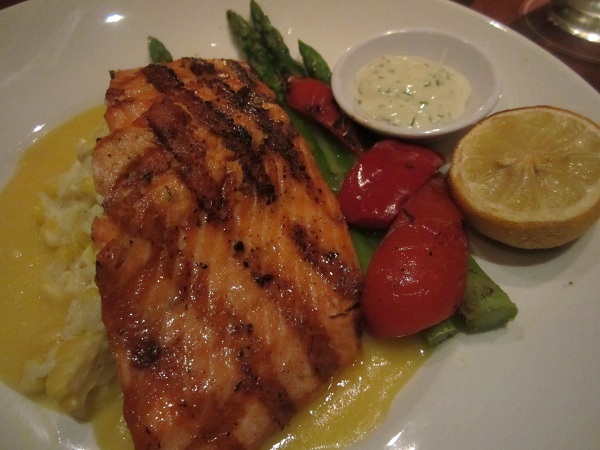 And it just wouldn’t be me if I didn’t take a moment to review the desserts. The two new desserts on the mini indulgences menu for this season were a raspberry cannoli and a blueberry cheesecake, and I got one of the latter. These mini desserts are wonderful little things because the one thing you should not have after a really satisfying meal is a slice of cake the size of your head (you save that to eat by itself as a treat). The blueberries are just perfect with the cheesecake, and even though I am biased because that is one of my very favorite desserts, this particular treatment of it was a very satisfying end to a delicious dinner. 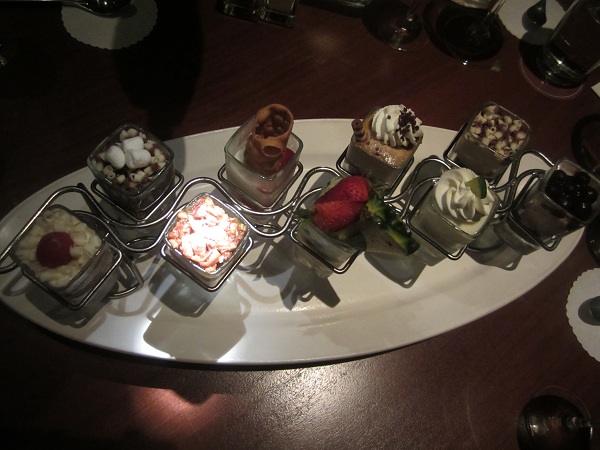 This was a visit that made a real difference in turning around a particularly tough week for me. Seasons 52 isn’t really comfort food because it draws your attention and is rightfully the focus of a meal. Grant and I have been watching a fair amount of the Nero Wolfe TV episodes lately, and I would like to imagine that the detective would find a worthy meal or two here.