Over the years, I’ve taken my share of potshots at a certain type of Atlantan – and these are a very, very small minority of us, I trust – who cannot countenance the idea of traveling anywhere outside I-285. Now, I understand a reluctance to make long, unnecessary journeys, but having been raised as a suburbanite who would, in high school, ride or drive all over the city and the northern ‘burbs looking for certain scarce comics or records, my mindset might be a little different from some. When I was trying to assemble a complete run of Mark Evanier and Will Mueginot’s DNAgents, arbitrary boundaries like an interstate didn’t mean anything to me. Plus, we walked either under or across the darn road all the time. It was just a road, and certainly not a barrier keeping people from tracking down a really good hamburger.

Sadly, though, we must concede that there is an inverse to that equation. Much as I’d like to mock paranoid intowners afraid to leave their bubble, there’s an equally stubborn viewpoint that unconsciously, we hope, infects the suburban mind. I did not know what a Sweet Auburn Curb Market was supposed to be, and for some sad reason, I never took the time to learn. I read that, for example, that the wonderful Bell Street Burritos started life as a stand in that place, and never took the time to learn more. Same with Grindhouse Killer Burgers. I didn’t know what this place was, and didn’t care to learn. That’s no way to go through life; that’s a way to keep yourself ignorant.

A few weeks ago, Marie and I wrote about the Food Truck Park, and reported that I was disappointed that Sweet Auburn BBQ’s truck was not open. Well, if the mountain wasn’t going to come to Mohammed, it was time for me to see what the Curb Market was all about, and get this barbecue straight from the source. What I found was enough to leave me slapping my forehead over my suburban stubbornness, because this is one of the most interesting places in the downtown area, and one that I think all of our readers would really enjoy visiting.

It’s a combination farmer’s market and shopping mall, owned by the city. Here’s the place’s mission statement: “The Sweet Auburn Curb Market exists as an urban farmers’ market that unites rural and urban Georgians through food and activities that celebrate local agriculture, the history of the Sweet Auburn neighborhood and the diversity of the city of Atlanta. To achieve this mission, the market operates as a self-sufficient entity that houses a wide variety of food vendors, including restaurants and food stands, and serves as a year-round destination and lively gathering place for community members and visitors.” 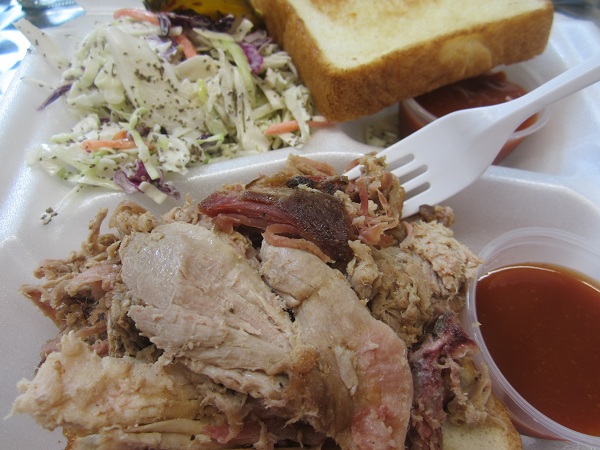 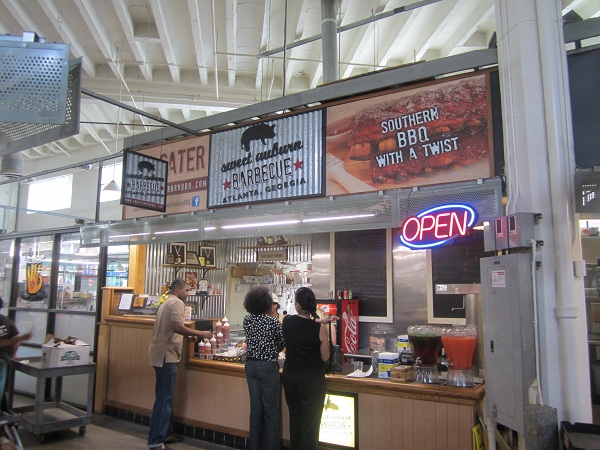 There’s a small pay lot, but almost all of the vendors will give you an hour’s validation for a small purchase, and I can’t imagine coming here and not finding something to buy. Apart from all of the people selling local produce or meats, there’s a used bookstore and a pharmacy, and, oh, several terrific and locally-owned restaurants. Sweet Auburn BBQ started as a catering and competition truck, but set up here last year, and knock me down if this isn’t some of the very best pulled pork inside the perimeter. I know that the hours aren’t all that convenient – the market closes at six and isn’t open Sundays – but this is juicy, smoky and completely delicious and worth making time to visit.

I had a sandwich, served on Texas toast, and slaw and a cup of addictively wonderful sweet mint tea and would have gladly gone back for a second if I didn’t have more to sample from other places. They have a few sauces to choose from, and while I liked the vinegar-based the best, I must speak up for the hot sauce as well, which was sticky and sweet and spicy all at once. And this slaw – Asian pear slaw! – really is something else. There’s just a little mayo in it, and a lot of other things. Some dill seeds and red pepper with the pickles really turned this into a very memorable side dish.

Look, I certainly agree that Fox Brothers is amazing, but if you want something that says “Atlanta” more than it says “Texas,” then I strongly suggest that you try this place, and then plan to bring all your out-of-town guests. They’re new, and don’t have the sense of history that so many good Atlanta barbecue joints have, but the Curb Market, which itself opened in 1918 as The Municipal Market, has history enough to spare. 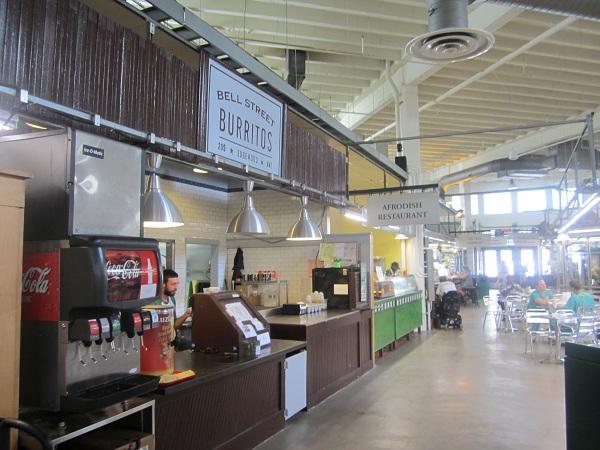 I was tempted to get a taco from Bell Street, but I already know what those taste like – amazing! – and would rather stop by a different vendor for one more thing to try. I actually went by two. At YumDiggity, a gourmet hot dog stand that opened in March, I went with a sausage with mustard, onions and relish, and at Grindhouse, I got a delicious chocolate-peanut butter milkshake to take with me. YumDiggity, a concept from Carson Young, the owner of the Yumbii truck and Hankook Taqueria, doesn’t appear to be quite as radical an experiment as those. Rather, using meats from the Wienerz butcher’s in Marietta, it’s traditional franks done with a little pizzazz. Perhaps the next time I come by, I will try the andouille sausage dog. 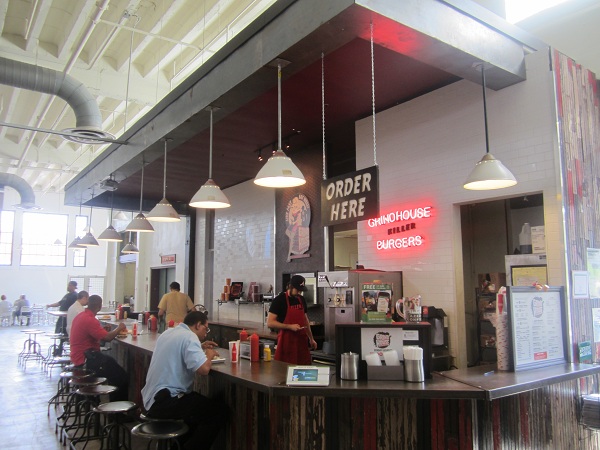 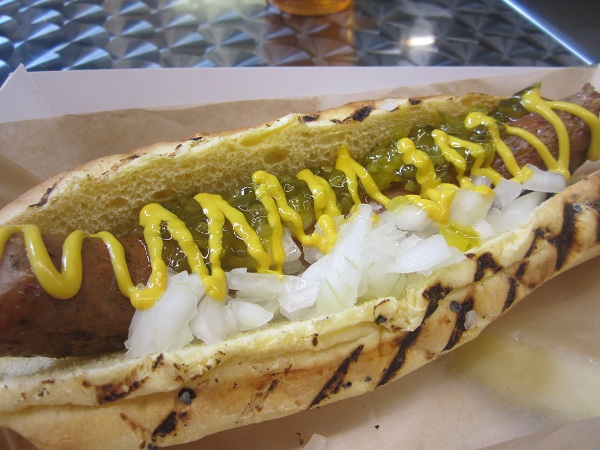 I left just absolutely kicking myself that I had not visited before. There was so much to see, and I would love to come down with Marie to do some farmer’s market shopping one Saturday in the near future. Don’t get me wrong; we really like the vendors at the Marietta Square Market, which we visit about once every three weeks or so, but I haven’t seen chitterlings at a one of them. It looks like there are far more incredibly neat things to see here than a single hour’s visit to eat and explore could reveal. Just make certain to bring your parking ticket with you and get it stamped. That said, from noon to one, this place seems to get so swamped with GSU students and Grady workers that you might end up spending more than the one hour’s validation just because of the crowds! 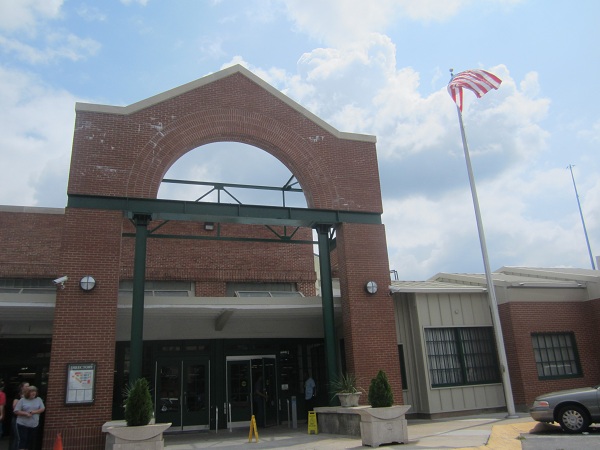 Other blog posts about Sweet Auburn: