Many years back, there was this terrific hole-in-the-wall barbecue place called Benny’s. It was located in that ramshackle strip mall right where Ashford-Dunwoody and Johnson Ferry have that obnoxious intersection, where so many restaurants have thrived for a year or three before vanishing. Once upon a time, French Quarter Too was here. So was this Golden-This-Happy-That Chinese delivery place that had a really curious and impossibly spicy dish called Zyu Cheng Chicken on the menu. And then there was Benny’s, one of the loudest and most wonderfully chaotic businesses that I’ve ever seen. The notion of ordering meat dry never occurred to these good people. You joined a line and a woman bellowed questions at you, ending in “HOT, MILD OR MIX?” I think that everybody who sat down with a plate of food had to wipe their brow, relieved that the interrogation had finally finished.

Marvin Brown has found a home for his itinerant catering and farmer’s market business just two doors down from where Benny’s used to thrive. It seems off to a promising start. I visited on a quiet and slow afternoon and sat down to a gigantic plate of food for about ten dollars. I thought the pricing was a little strange. A sandwich with one side is a quite high nine dollars, and a plate with two sides just a dollar more. Don’t get me wrong; what you see below is definitely great value for money – especially since, if you pay with cash, they give you a 10% discount! – but I’d rather have a smaller portion of meat and one side for seven than overindulge with all this food, no matter how good it tastes. 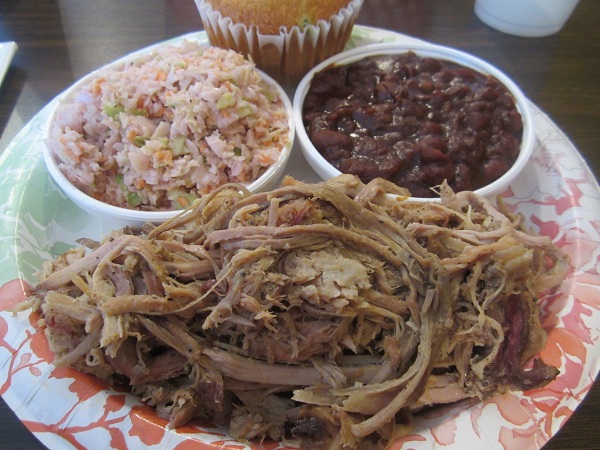 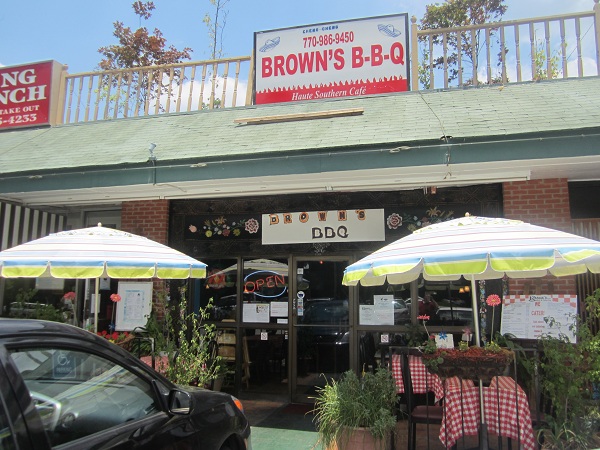 The pulled pork is perhaps a little more moist than I prefer it, but it has a good, smoky flavor. My server told me that Mr. Brown mixes quite a few different woods, including hickory, oak, cherry and “lots of stuff.” It’s a shame that he was not available; I would have liked to know more. The baked beans are gooey and flavorful, if quite heavy, and the slaw is a very interesting recipe. There’s very little dressing in it, allowing the diced cabbage to really show off on its own. Add a perhaps too-crumbly jalapeno muffin, and guests will definitely feel like they’ve indulged. This does not appear to be a business that scrimps.

I was disappointed that the various sauces were not on the table for me to try each one, but the meat was cooked well and I enjoyed the “NC Traditional” vinegar sauce, even if it was a little browner and thicker than what I’d expect from a traditional North Carolina sauce. The other sauces are “Sweet & Tangy,” “Hot BBQ” and “Sweet Onion.” They presauce the meat with one of these four unless you ask for it dry, in which case they’ll bring a bottle of your choice to the table. There is, disagreeably, an additional charge for additional sauce, and Brunswick stew is not available as a side, but as a quite pricy extra item. Those are the sorts of quibbles that can wreck an otherwise good restaurant in my book, since I prefer to have stew as one of my sides, and enjoy alternating bites of pork with different sauces.

All told, this was a good meal at a good restaurant, but not really a great one. I wish that my quibbles hadn’t overpowered the experience. My server, who was enthusiastic and upbeat and just a little silly, invited me to come back and try their smoked fried chicken, which certainly sounds interesting, and gave me one of those repeat business bribe cards that I never seem to do anything with, since we have so few repeat businesses these days. But if that smoked fried chicken is as good as she made it out to be, I’ll probably get one or two more initials on it.

We have featured more than 150 barbecue restaurants here, and you can see a map of them all to help plan your next road trip. Check it out!