So, let’s get the obligatory mention of LeRoy’s out of the way. I liked LeRoy’s. It was pretty good, but pretty expensive, and it didn’t last long, and it closed and a family rented out the property and put their own recipes in the fry vats. Curly’s Chicken is even better than LeRoy’s and less expensive.

In fact, it was the price of somebody else’s chicken that sent me to Curly’s in the first place. There was some place that I was considering eating, and I looked up their menu after reading some people raving about the fried chicken and said to myself “That just can’t be right.” But then I started craving fried chicken, and remembered that Curly’s had been on my to-do list for months. It was really worth the wait!

Readers will, I hope, forgive the truly horrible photograph below. It did not occur to me that shooting underneath a red umbrella would have a really pink impact on the resulting picture. Oops. 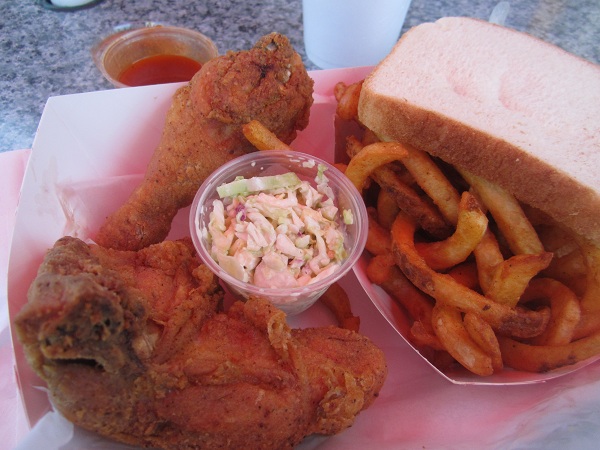 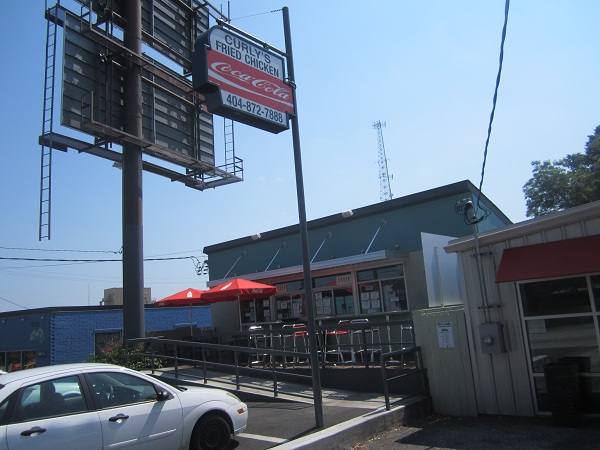 I came by on a Friday morning about ten minutes before they opened, but I had time to spare and brought a book and figured I’d enjoy the breeze until they were ready to take my order. They took it immediately. I guess that I should clarify that by “they,” I’m referring to an awesome and large family. The owner’s name is Steve, and Curly is his father. They’re using his recipe and frying in canola oil. All of their combos are named for family members, and the ones working on this Friday morning were as pleasant and friendly as can be,

I had Shay’s combo, with two pieces of dark meat chicken, a little cup of slaw, a slice of bread, a drink and a side for just $7. I just ordered fries because I was in the mood for them, which led a co-worker to roll his eyes at me. I was supposed to order their mac and cheese, apparently. Everybody knows that Curly’s makes the best mac and cheese around. I was pleased to learn that the restaurant has already scored so well in the vital “word of mouth” department to have people making such statements.

Curly’s, I understand, fries to order, so there’s usually a short wait. I got several pages into the M.C. Beaton that I was reading – she’s surprisingly less of a cozy writer than I was led to believe – before having to retire the book and dedicate both hands to the task of this chicken. It was greasy and flavorful and just salty enough to hit the spot. I’ve had better, and it certainly didn’t erase the memory of the fried chicken that I did not get to enjoy at Gus’s in Memphis a couple of months ago, but I’ve not often had it so satisfactory. They do good work here, and I’m glad to see a family so happily working together to make a success out of a space that housed such a public burnout not long before.

The parking situation, on the other hand, or, more accurately, the difficulty in backing out onto Howell Mill and getting away from the restaurant, that has not been improved at all!

Other blog posts about Curly’s: