This is Marie, contributing an article about two restaurants in Dayton that I had the privilege to visit during a business trip to interview for a job in Dayton, Ohio. One of these was a place rather emphatically off my beaten path, and the other just the kind of place I could wind up visiting often. It was the first time I had been away overnight entirely by myself since the baby was born, and it definitely felt odd. There was another layer of oddness to it, in that I didn’t know whether when I came back from the trip I would be able to make a true decision about whether to take the position if offered, due to some legal unpleasantness mentioned in Grant’s last post.

Tank’s was chosen in no small part because of a rather disappointing meal of the evening before, after getting into Dayton on a midafternoon flight that left some time for driving around. I had used the remaining light the evening before mainly for getting a look at the city, and didn’t spend the time I could have in finding somewhere to eat. I needed a place to start off the day right, and that meant it shouldn’t have a home office to print up plastic menus and, as my rental was equipped with GPS, I felt brave enough to explore.

Tank’s started out as a bar, not a breakfast place – in fact, it still is a bar. It is the first bar that I’ve seen (of my admittedly very limited exposure, not being the drinking type) that had baby seats stacked by the door and a changing table in the bathroom. The server seemed quite proud of the restrooms and recommended them – they looked as though they were borrowed from a nice Italian restaurant. 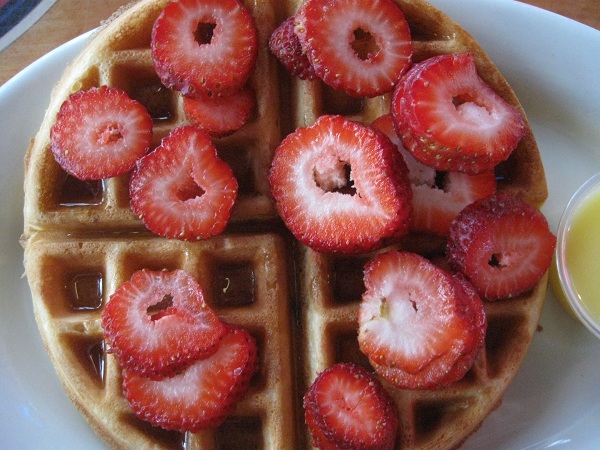 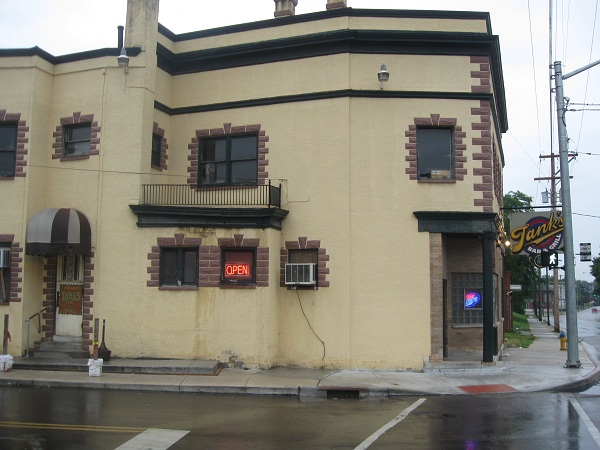 Tank’s started serving breakfast rather by accident, from what the server said, and it seems to have grown just because it filled a need. Judging by the group of firefighters and medical folks coming off their night shifts who were in there with me, their predecessors were the ones who probably got the ball rolling.

As mentioned before, it’s a bar. You get slightly spotty menus, slightly sticky tables, and although the decor includes potted plants, it’s dominated by the generously-stocked refrigerators full of glass bottles. However, the food is the important part, and that is good. How many bars do you go to where they care enough about the food to hand-slice strawberries instead of just scooping out a spoonful of recently-frozen strawberry goop to pour over a waffle? When I checked out of the hotel they asked where I’d gone, and agreed that Tank’s was the place to go, though they loyally stated that their hotel restaurant was quite nice too. Then later, at work, I found that the place had been popular with some of the folks there as well.

For lunch we went to the Carillon Park to visit Culp’s Cafe. It’s a cute little place with a neat view of the park. Sadly, although Grant would probably enjoy the down-home food (which he didn’t get to see because I took an uninspiring picture of the very tasty salad variety plate I got) he would be scared off entirely by the fact that the tea choices were hot, cold unsweetened, and cold with raspberry. The place was fairly well filled at one or so when we got there, but the service was quick and pleasant.

The patriotic posters from WW2 around the walls made an interesting conversation piece; there are also some other photos less prominently displayed of the cafe’s history. It’s got some character – starting as a widow’s bake shop, upgrading to the first cafe to have air conditioning in Dayton, and then morphing into the present location where it is in good company with the moved-and-restored historical buildings out back. Just as with those buildings, whose original locations were no longer suitable for their preservation, the restaurant is doing fine where it is but has lost its context. Although I enjoyed my salad, I do want to try their roast beef special some day, though. It seemed as though half the tables had a plate of that on at least one of the places. Also, they had just started serving breakfast in the mornings shortly before my visit. Maybe I should come up with an excuse to visit again. 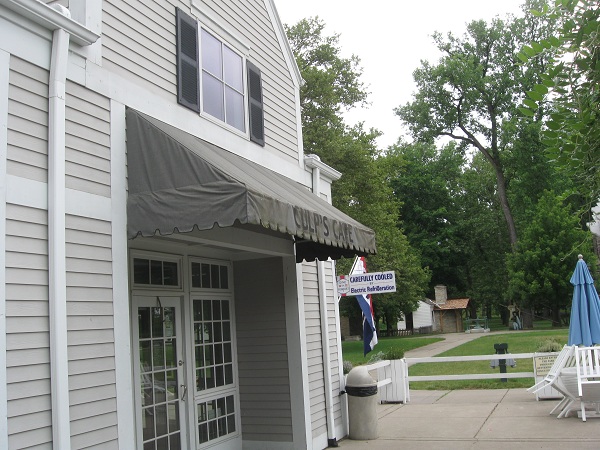 I left Dayton with mixed feelings. The trip had been a good one – I felt pretty confident about the job interview, the job itself seemed interestingly challenging, and the neighborhoods around the workplace were green and pleasant and absolutely chock-full of parks begging for a small boy to play in them. There were restaurants with interesting qualities and a park within walking distance of work with a huge bell tower in it. I already knew three people from that office well enough to feel comfortable with them, and others seemed like good people who deserved getting to know better. But the events of the following day would have a huge impact on the decision.

As it turned out, moving out of state turned from fairly likely to impractical, so our readers are not going to see a change from southeast to midwest in our postings. It would have been an interesting adventure, however.