When we first told our friends that we were going to make a blog out of our hobby of traveling and eating at fun local places, our good buddy Brooke piped up with a suggestion in Nashville. She told us that we needed to try Mas Tacos, a food truck that has, in the nearly two years since she told us about it, found a brick-and-mortar base and has been serving up some ridiculously good Tennessee-styled takes on traditional Mexican dishes. We visited Nashville twice in 2010, but neither visit really coincided with a good time to go meet up with Mas Tacos, either the truck or the shop, during their limited hours.

Quite traveler-unfriendly, they are usually a weekday concern, and on weekends, they are only open for brunch on Saturday. Brooke is emphatic that we simply must come on a Friday evening, when they’re open late selling fish tacos. The really great things that we enjoyed on the first Saturday of the month sold me; we have penciled in a Friday night visit for March so that we can try the tilapia.

We had a group of six plus the baby when we visited. Our daughter stayed home with my mother for the trip, but it still took two cars to transport Marie and me along with Brooke and Tory and their boyfriends Matt and Andrew. Our first planned stop, after we arrived in Nashville around 11.30 local time, was the legendary Prince’s Hot Chicken Shack, but they open later on Saturdays than I thought. We set that aside and came back that way later in the evening; look for a chapter about that remarkable visit on Wednesday. Mas Tacos Por Favor is about four miles south of Prince’s, through the dense commercial sprawl of what the locals term “East Nashville.” It’s really more sort of north, I’d say, but neighborhood traditions are weird things. 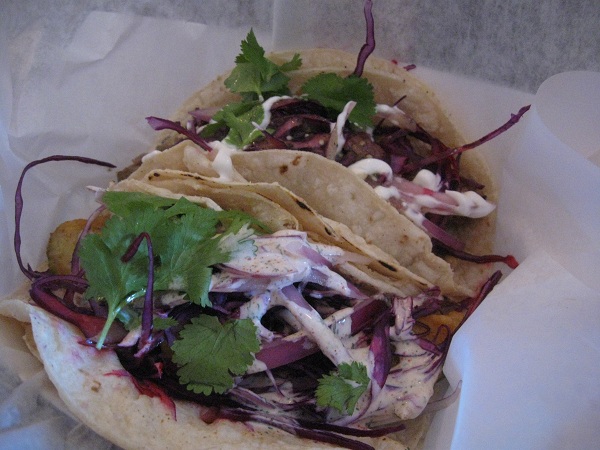 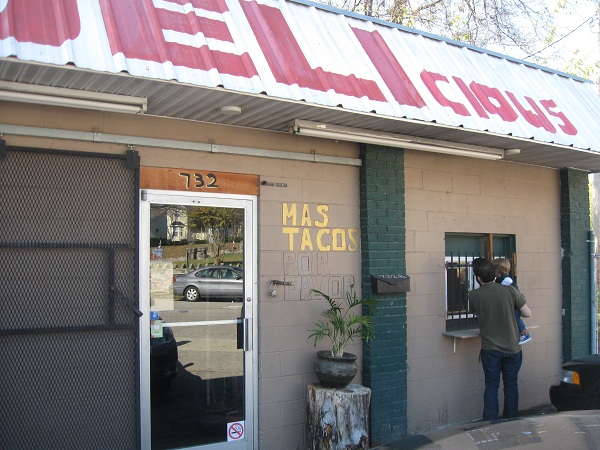 Teresa Mason’s delightful old Winnebago is parked out front of the store, and I understand that one reason it’s hard to track her down on the weekends is that she’s usually booked for events and things and doesn’t want to try being in two places at once quite yet. Since we knew that we had a very busy day of eating ahead of us, we all took it fairly easy here, just munching on one or two tacos each and enjoying a cup of tasty horchata.

The menu, written in colored chalk on blackboards mounted around the window inside, changes all the time here, based on whim and what ingredients are available. I picked two tacos, fried avocado and spicy carne molida, and Marie had pulled pork. Most of the tacos are topped with red cabbage, cilantro and onions, and a light drizzle of a creamy dill yogurt. It’s a terrific, eclectic little mix of flavors, and served in a cozy, low-lighted, get-to-know-yer-neighbors space. I like the design and love the food. Brooke pointed out Ms. Mason to us as she rushed through; I was sorry that we didn’t get the chance to speak. I certainly hope that we can make it back in March. 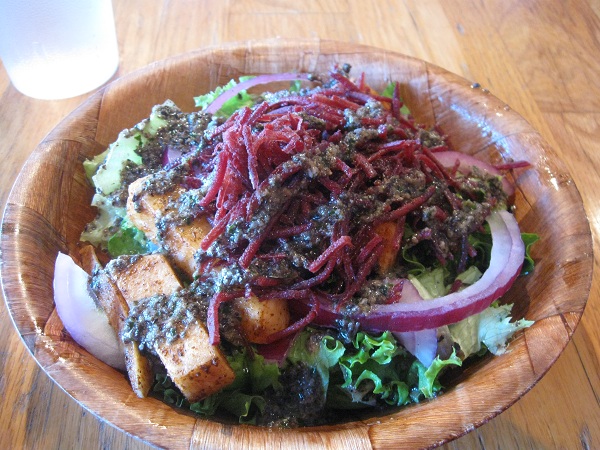 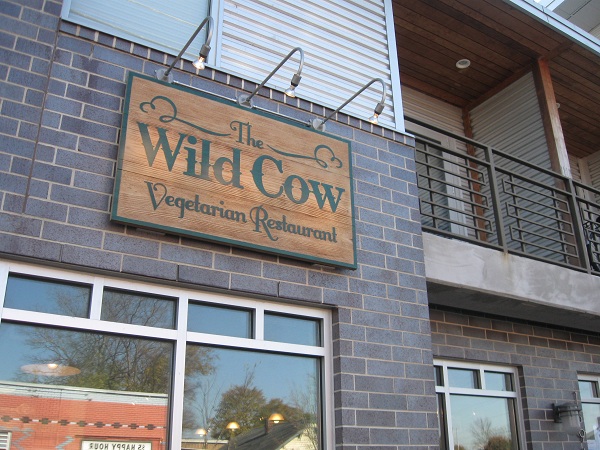 The second stop on our trip was just a hop, skip and a jump away on Eastland, and it was, similarly, packed and busy with a lunch crowd. It was also very, very smoky inside thanks to an awful lot of stuff being grilled in the back. About two years ago, a hip new multi-use development was constructed in front of a closed and deteriorating old retirement home, bringing some new life to this side of the neighborhood. Among the brand new restaurants to move in is The Wild Cow, a vegan place that has been winning all sorts of city awards along with a large and devoted clientele.

Marie and I still ate kind of small here. I ordered the first thing on the menu, the small green chile root salad, which confused me when I looked it up online after I didn’t remember the name of it, and found a slightly different worded version of the same dish on their website’s menu. It was very tasty, and had fresh lettuce, jicama, a heaping handful of crisp, roasted beets and pumpkin seeds tossed in a green chile “caesar”-styled dressing. Marie was interested in the side dishes and had the pineapple cole slaw, which she did not enjoy quite so much, and the excellent lentil stew.

Most of the others, still pacing themselves, just shared a large appetizer order of the restaurant’s cashew dip, which is served with tortilla chips and fresh veggies. Andrew would be leaving the group after this meal to go to work, however, and so he dug in to a French Quarter Dip, which substitutes seitan and mushrooms for roast beef on a hoagie roll with creole-style seasonings, and had a side of spicy kale. He said that he enjoyed it, but the kale was the real standout. Andrew regretted having to work and missing out on the restaurant’s excellent beer selections. They offer several high-gravity ales and stouts from good breweries, including the local boys at Yazoo.

Perhaps almost as interesting as the food was the soda that Marie ordered. I’ve not seen Bruce Cost’s ginger ales before; they are unfiltered and require a little very gentle shaking to mix the ginger better before opening. I don’t think the result is quite as appealing as my beloved Buffalo Rock, but it’s still an extremely good ginger ale.

After this, we returned to Tory’s house for a short break before going shopping at the local McKay Books, which is always a pleasure, and then resuming our little eating tour. These first two restaurants that we visited are quite new, but the next one on the agenda was a much older one, and one that Marie and I have loved for a few years already. More about that in tomorrow’s chapter.

Other blog posts about the Wild Cow: