In the previous chapter, I wrote about two reasonably new restaurants in Nashville that we had not tried before this visit. This time around, a pair of considerably older restaurants that I have enjoyed before. I was visiting Music City long before Marie and I started blogging, after all. Plenty of favorites have come up in the mix.

Marie and I first visited Rotier’s just after we got hitched and made our way to town, and again a few months later when we were passing through on our way to Kentucky and met up with Tory for a bite. I found the place thanks to its listing at Roadfood.com, and it certainly didn’t disappoint. Design-wise, it reminds me of Coletta’s in Memphis. It’s dark inside and, before Tennessee banned indoor smoking in restaurants, you probably couldn’t breathe very easily.

Rotier’s opened in the mid-1940s and is still in family hands, grilling up some incredibly good burgers with a lovely feeling that they are doing it their own way. It’s the best kind of hole in the wall, the one that locals have probably driven past dozens of times without ever noticing. With its back to the busy West End thoroughfare, it’s simply invisible unless you happen to be on this side street and looking the right way. 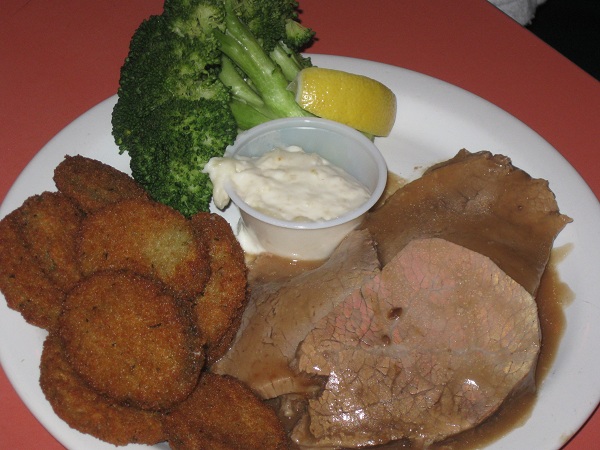 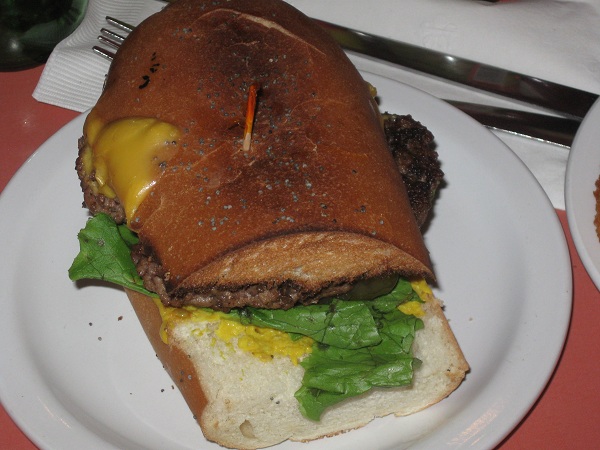 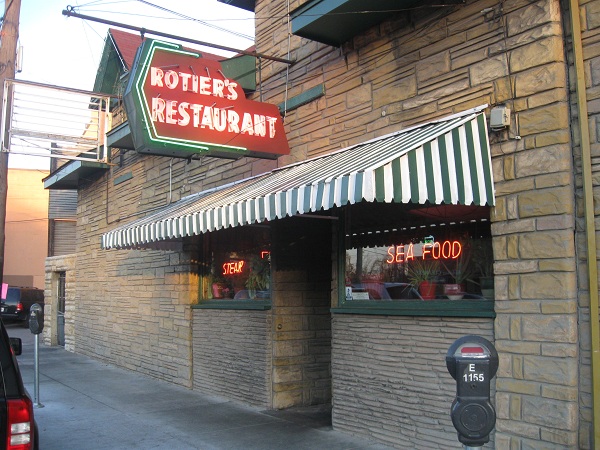 I don’t know that I’ll ever order anything here except the hamburger. I like mine on French bread, but they’ll give it to you on a bun or on toast if you ask. A couple of trips back, though, someone in our group had the roast beef and that has sold Marie, and she, in turn, recommended it to the rest of our group. While the baby slept, Tory, Brooke and Matt joined us for this early supper. Brooke and I each had burgers and everybody else dug in to the roast beef, which comes in a really thick gravy, and enjoyed a pile of sides. Everybody had either the fried zucchini, which is completely amazing, or the fried okra. Marie also ordered some broccoli, for some weird reason, when she could have had the fried pickle spears, which sounds much more sensible to me.

With more meals forthcoming, a little exercise was called for. We actually parked just a couple of minutes’ walk away in Centennial Park, and went back to the cars to unpack the baby’s stroller and then took a nice jaunt around the gorgeous park, where the Parthenon was all dolled up for some big event. The side of the gorgeous building was lit up in blue, with bubbles and fish projected onto it! It looked like the sort of shindig that always gets interrupted in Gotham City by supervillains and their gangs.

We also had a really disagreeable experience with a really talkative homeless guy trying to make friends with us. But, you know, cities. We outwalked him.

On the other side of the park, we came to a restaurant that I had visited ten years previously. It’s a little barbecue place called Hog Heaven that mainly does takeaway, but also has a few wooden picnic tables for guests to eat there. The restaurant opened in 1986 and is staffed by a really goofy, fun-loving crew. At some point in the eighties, one of the young staffers, using that awful old computer paper that you might remember having little holes along each side to feed through, wrote up a hilarious sign asking for tips so that their band could go into the studio and record a cassette. The sign is still there, and occasionally baffles customers who think that it’s meant to be taken seriously. “Nobody really makes cassettes any more, do they,” people will ask, before giving advice about mp3s. 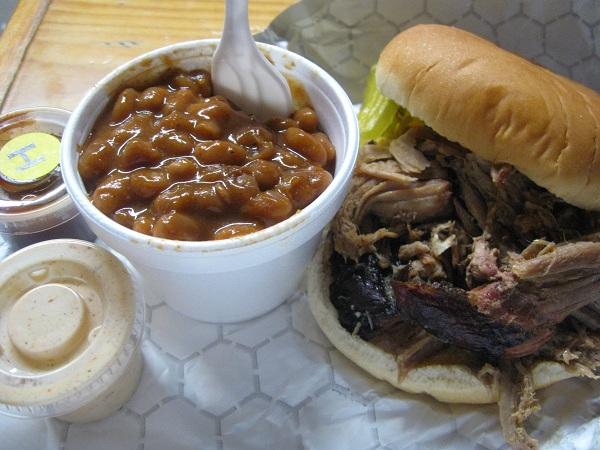 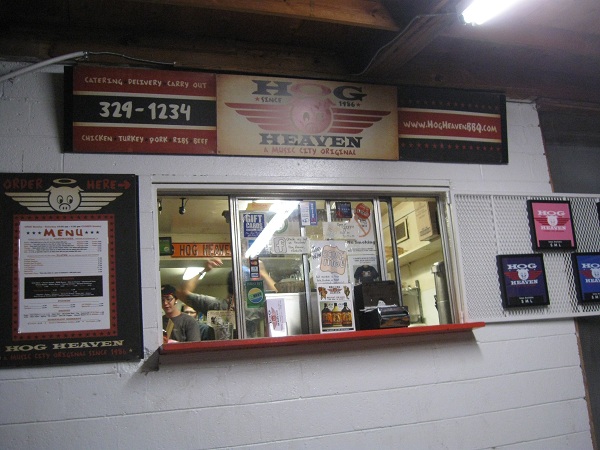 I had a pulled pork sandwich and a side of baked beans and while I was not blown away, this was a perfectly satisfying snack. The pork does not taste very smoky, but it is quite moist and full of flavor, with a really satisfying, chewy bark. I asked for the meat dry and had two teeny cups of sauce on the side to try them out. The regular hot sauce is a brown, spicy and sweet concoction typical of the Memphis style, and it complemented the pork very well. The white sauce looked a little pink under the harsh lighting, and had a bit more of a kick to it than any other white sauce that I have tried, but I really preferred the brown, and, after getting a good taste for both, ended up pouring the rest of the brown over my meat.

Everybody else overindulged and ordered a good bit more food than I did at Rotier’s and passed on this meal. We’ll call it their loss; Nashville is said to have many barbecue restaurants that can compete with the quality of this, but I enjoy it and hope that I don’t wait a decade to stop by again.

Other blog posts about Rotier’s:

One thought on “Rotier’s Restaurant and Hog Heaven, Nashville TN”