I was told two things before going to Prince’s: that the wait would be long and that the chicken would be unbelievably hot. You know that Daffy Duck cartoon where the genie warns him very sternly that he’s going to suffer dearly for his insolence, and Daffy just dismisses him with a “Consequences, shmonsequences” and learns the genie was not kidding? I felt a bit like that.

So, as related in the previous chapters, our friends in Nashville led us around – the number of people required two cars – to visit some good eating. To avoid the line, Prince’s was actually our first stop, at noon. They don’t open until two in the afternoon, evidently because, on weekends, they stay open until four in the morning. So we came back later on, right in the middle of their supper rush. This is a really sketchy little strip mall in an ugly side of town at noon. After the sun goes down, and people start wandering in to ask diners whether they’d like to buy a brand new two-pack of mens’ shirts, you start to wonder how the heck good this chicken must be. 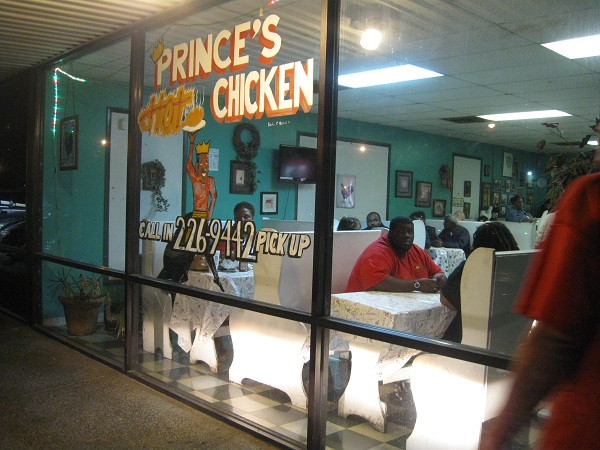 We ordered. We were given number 88. We looked around and noticed that there really were a hell of a lot of people twiddling their thumbs. The security guard – yes, security guard, and packing – had turned on the LSU-Alabama game, five minutes into the first quarter. It didn’t appear that there was a line when we entered. It only registered afterwards that all these people had already placed their orders. Ms. Jeffries – Prince is her middle name, and she is the grand-niece of the Prince family that started this joint in a different location decades back – seems to have an extended family and lots of young nephews watching TV in the back. We enjoyed brief bits of casual conversation with the folk around us. A lady called out “number 53! Your order’s ready!”

Time passed. Brooke suggested that she take advantage of the delay to go gas up and return. Our three friends decamped as two seats along the wall opened up, so Marie and I took the baby and sat down. A fellow came to wipe down the table next to us. “Wow,” I said to him, “is it always this busy?” He talked, at length. Almost the entirety of the twenty minutes that Tory, Brooke and Matt were gone, I listened to this man talk and found his mumbling impenetrable. I caught perhaps every eighth word at first, nodding sagely. He just talked like a character in a Cure B-side. After a quarter of an hour, he held up a finger and said “something something something cake something something back,” and returned with a flyer for Irene’s Old Fashioned Homemade Cakes. I think that he recommended me to phone in an order.

After he made his way to wipe down another tablecloth, Marie and I watched some guy with a seat at the table in the window react with some visible intensity to the powerful chicken that he was eating. He was wearing a lime green ball cap. His face was the color of a brick. He was just far enough away that we couldn’t quite hear what he was saying over the sound of the other diners, and the two children bouncing a basketball back and forth, but he was wiping sweat from his forehead and it sounded like he was saying “howwwwwkkk, awwwwwkkkk, Gawwwwwd, arrrrgh.”

Our friends returned. They called out number 65. It was nearly 8 pm, and our dessert destination, Pied Piper Creamery, would be closing in an hour. We decided that Marie, Brooke and Matt would go get ice cream and return to Tory’s house. Tory and the baby and I would wait for the chicken. And so we waited and chatted. The security guard took a break when the game reached halftime, LSU and Alabama tied at 3. You should see this security guard. He might not climb a chain link fence to run after you, but I’d sooner punch myself in the face than this guy. 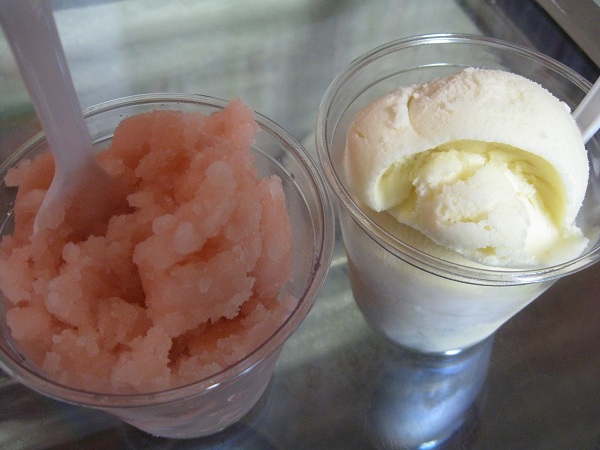 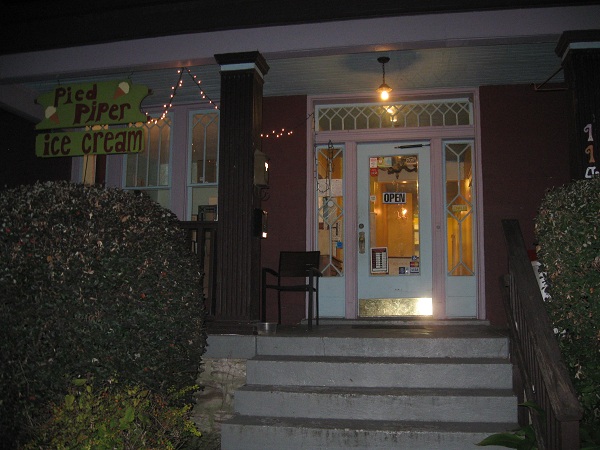 As Tory and I waited and, mercifully, the baby slept, everybody else made their way south to the awesome Pied Piper. We wrote about their sister restaurant, the Eatery, last year. It is one of our favorite places in the city, and we knew that the ice cream would be good. Everybody got wonderful treats. Marie selected a Cheerwine sorbet for herself and a vanilla for me, and all the ice cream waited in the freezer until we got the chicken back.

We returned at five to nine and unwrapped the chicken. Whether dining in or taking home, the chicken comes in wax paper in a brown bag. Unwrapping it, you find deep dark orange that we now know to be the color of pain. 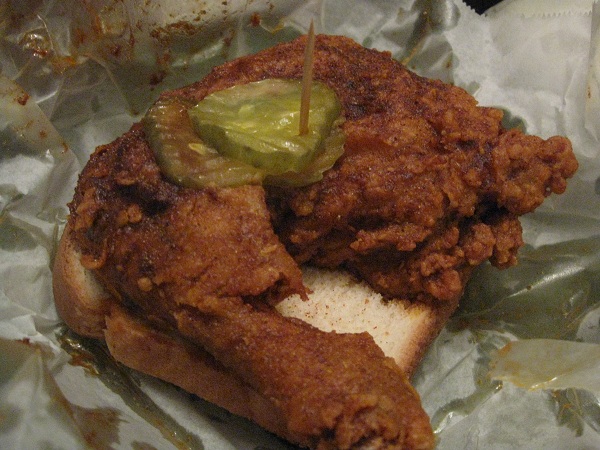 I don’t care how many ghost peppers you think that you can gargle. Do not, do not order this chicken hot the first time you go to Prince’s. Sure as you’re living, do not order it extra-hot. Start with mild and work your way up. I’m serious. I’ve finished vindaloos enough to think I’m ready to tackle a phaal one of these days. That Man Vs. Food guy would get knocked down unconscious by Prince’s Extra Hot.

Tory had one small bite of the hot and was done, instantly. And see, the first three or four bites, it’s not too lethal. What happens after those three or four bites shouldn’t happen to anybody. Marie worked her way past the skin, where the hot paste is concentrated, and dug out the meat and still couldn’t finish half a leg. I did slightly better, but this was not the same sort of life-affirming, every-corner-of-your-mouth-is-alive glorious air-punch of hot awesomeness, this was insanely firey and very painful. The chicken was good, oh it was so good, but it hurt too damn much. My lips felt like they were puckered up like the beast in the kissing booth at Six Flags’ Monster Mansion and, abruptly, I retired. I went back to the restroom to wash any lingering Scovilles from my face. Speaking of Cure B-sides, as I did above, my mouth was the color of Robert Smith’s, but I was not wearing lipstick. I rubbed Chap Stick on them and it felt like chalk. The next morning, Marie’s mouth and mine were still chapped.

Unhappy and in unwelcome discomfort, I returned to the den, where my vanilla ice cream was waiting. This was, in point of fact, the best ice cream that I ever had. Maybe it was the exceptional circumstances, or maybe Pied Piper is just that good, but the next time that I get a hair up my butt to eat crazy lava chicken, I’ll have the Piper on speed dial.

Then things got bad. Tory had pulled up a silly video on YouTube to show us. It was incredibly funny. I laughed so much that I teared up. My eyes and face started burning. I don’t know how I got hot chicken death sauce near my eyes, but I did.

One of the funniest things ever seen in a movie is in the 1985 comedy Clue, in which Madeline Kahn, as Mrs. White, starts talking about how she once got so angry that there were “flames, flames” on the sides of her face. Up ’til that first Saturday in November, I didn’t really know just how bad that might be for anybody.

It hurt, but it was good. I would not have missed this experience for the world. But heed the warnings. Us folk on the internet? We know what we are talking about. It is hotter than you think it is. Have ice cream handy.